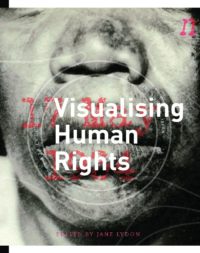 A book title has possibly never so concisely summed up the ostensible, material object of its investigation and the deeper, ethical paradox at its heart: how, exactly, do you visualise human rights? Visualising Human Rights sets out to explore, if not to answer, this question.

This collection of essays and photographs examines visual practices in the area of human rights and dissects the politics of spectatorship. Every photo here serves a purpose: each is discussed to reinforce analyses of “the ways that visual images have been used to define, contest, or argue on behalf of human rights.” Editor Jane Lydon and the various authors explore and illustrate why visualising human rights is not only difficult to achieve, but also, in practice, problematic. After all, as Susie Linfield was quoted: “it’s awfully hard to photograph a human right.”

The notion of human rights, we learn, evolved in the 19th century into humanitarianism, a philosophy of advocating or practising compassionate action. Critics of humanitarianism argue that it requires the object of that compassionate action to be passive. Pictures of suffering, even when used to generate empathy, compassion or pity, take away the individual’s subjectivity and diminish their humanity. The only way to visualise human rights was by depicting the suffering of those stripped of their rights.

Here, the problem deepens. While photography is an essential tool for disseminating ideas, and for reinforcing a sense of shared human experience and community, it can just as effectively highlight differences, or alternatively, efface differences. It can support perceived hierarchies and be used to justify arguments for conquest and oppression. Historically, refugees had little control over their own public representation, and common visual tropes such as the “sea of humanity,” or images of women with children, defined what refugees and asylum seekers looked like, allowing the viewer to see displaced people at a distance and understand them as other.

We know that photographs can be manipulated and used as propaganda, but in a world saturated with visual imagery, it’s worth being reminded anew. Susie Protschky, in Soldiers as Humanitarians, Photographing War in Indonesia (1945 – 1949), shows us how snapshots depicting Indonesians suffering, taken by Dutch soldiers on active duty in the Dutch-Indonesian war, were used by Dutch media outlets as evidence that Indonesia was incapable of self-rule. The same photos were also presented as Dutch soldiers’ empathetic witnessing of Indonesian civilians suffering.

In Sharing a Personal Past: #iwasarefugee #iamarefugee on Instagram, Mary Tomsic reminds us that more recently, and closer to home, the Children Overboard scandal in Australia in 2001 centred around the deliberate misuse of photographs. These were of children in the ocean, taken when HMAS Adelaide intercepted a small vessel (SIEV 4), in Australian waters, carrying 233 people seeking asylum. The photos were provided to the Parliamentary press gallery as “evidence” that adult asylum seekers were throwing their children in the sea in an attempt to emotionally blackmail their way into Australia. Our Prime Minister at the time, John Howard, then stated that these were not the type of people he wanted in Australia.

This leads us to Suvendrini Perera and Joseph Pugliese, in Between Spectacle and Secret: The Politics of Non-Visibility and the Performance of Incompletion. The authors contend that the politics of “non-visibility (rather than invisibility)” is practised in Australia’s offshore detention system and the nation’s maritime operations, which have since 2012 been classed as “covert” and off-limits to journalists. “This structure of non-visibility generates as its counterparts practice of exposure, ‘information,’ and official ‘fact sheets’ that insidiously work to further the nation-state’s political agendas with regard to asylum seekers.”

What, then, is the solution to the problematic history and practice of visualising others’ suffering in order to give weight to arguments for human rights?

Mary Tomsic shows us how personal photos can now be used as a tool to curate (rather than to manipulate) a public image. She argues that new practices of visual self-representations on Instagram, such as #iamarefugee or the #MeToo movement, are instances of the oppressed disrupting media stereotypes and taking control of their own images.

Tomsic presents case studies. @alisha0308 – Alisha Fernando – came to Australia from a Malaysian refugee camp after escaping Vietnam with her parents in 1982. In 2016, @alisha0308 posted a photo of herself as a baby, on a Dutch commercial ship that rescued her family at sea, with the text: “This is me. This is who I am. I am a #refugee who was given a chance to come to Australia by the #FraserGovernment as a child. @turnbullmalcolm please #letthemstay.”

Hashtags often follow what would otherwise be ordinary snapshots, to help define how spectators see an image. For example, a domestic or family snapshot is transformed with the hashtag, #iamarefugee, #iwasarefugee. The subject uses such hashtags to present a positive image of life lived as a refugee in the past, and still positively identified as a refugee in the present. Posts like these, says Tomsic, do not make direct claims on human rights, but do the work of presenting themselves, their families and all refugees as complex and eloquent humans. The use of these hashtags links personal history to political activity.

This collection of essays is a great starting point for a general reader with an interest in visual culture, and in what can be learned from the history of visual practices relating to human rights. The indirect message is that as we head into an online future where visual languages are paramount, we must think carefully – and continually – about these questions.