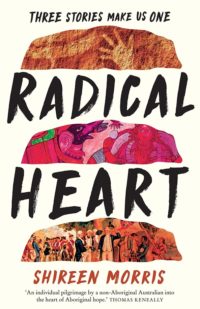 The Uluru Statement from the Heart came from a constitutional convention supported by the Referendum Council, a bipartisan council jointly appointed by then prime minister Malcolm Turnbull and opposition leader Bill Shorten. Though there was a focus on the calls to alter the Constitution in recognition of Aboriginal and Torres Strait Islander people the statement also called for reform around legislative change with the creation of a Makarrata Commission which would supervise agreements between the government and indigenous groups as well as the promotion of truth-telling in regard to indigenous culture, law, customs and, of course, the effects of colonialism.

Makarrata is a Yolngu word meaning “coming together after a struggle”, the name is suitable considering the injustices of the past.

Early on in Radical Heart, Morris announces that the lack of First People’s inclusion and participation in politics and the lack of Constitutional recognition is due in equal parts to politics as well as a “lack of morally courageous leadership”. Morris argues for the need for consistent and strong advocacy for indigenous recognition in the Australian Constitution, which would also require the formation of a constitutionally guaranteed indigenous advisory body, the Makarrata Commission. Makarrata is a Yolngu word meaning “coming together after a struggle”, the name is suitable considering the injustices of the past. Moving through the book it is not hard to see why Morris positions this statement front and centre given the complexities of the topic, and the voices involved – seemingly at times competing with each other.

Radical Heart is an important contribution to understanding the limits of constitutional reform in Australia as well as providing clear insights into exactly why this is required.

Morris’ strength lies in her ability to take readers on an intimate journey into the campaign around the Uluru Statement from the Heart, from personal stories about working with Noel Pearson, member of the Expert Panel on Constitutional Recognition of Indigenous Australians in 2011, who would admonish her work in front of policymakers in a bid to make her consider it more fully; to the delicate and often political tête-à-tête with constitutional defenders, left- and right-leaning politicians and key indigenous experts such as Marcia Langton.

Deeply telling, the lead up to the final chapter in which the Uluru Statement from the Heart is formally rejected sets out the ways in which government opposition and public uncertainty impacted upon recognition of not only the importance of the Statement but also its aims and future impacts on Australian legal, socio-cultural, political and educational frameworks. Radical Heart is an important contribution to understanding the limits of constitutional reform in Australia as well as providing clear insights into exactly why this is required.

Morris succinctly points out six key lies that need to be corrected when analysing governmental rejection of the Statement as being “neither desirable nor capable of winning acceptance at referendum” – collectively they showcase the fundamental misunderstanding of the role that indigenous Australians have within contemporary Australian society. They are at the heart of Australia and without giving the First Peoples a voice firmly enshrined in the Constitution, all Australians cannot move forward as a nation.

Shireen Morris takes readers on an intimate journey into the inner workings of the Uluru Statement from the Heart.