Sha Sarwari is a multidisciplinary visual artist who came to Australia as a refugee from Afghanistan in 1999. Sha’s work has focused on his past, such as the seven months he spent in detention as an asylum seeker. He also explores the notions of peace and freedom through the spiritual journey of creating a work of art. His work is autobiographical, a way of understanding his own experiences.

Right Now: “Asylum Seeker”, a boat made from newspaper and cardboard, represents the portrayal of refugees in the media. On closer inspection, the newspaper has script handwritten over it. What does it say?

Sha Sarwari: The handwritten script is a brief account of my journey to Australia – about why I took this journey, and things that happened in the detention center.

I guess you would like to know why I have overlapped the news in the papers with my own story. It is because the mainstream media does not bother to look closer into the issues and lives of refugees and asylum seekers that come to this country. This act in a way draws attention to the untold and unheard narratives of the asylum seeker. 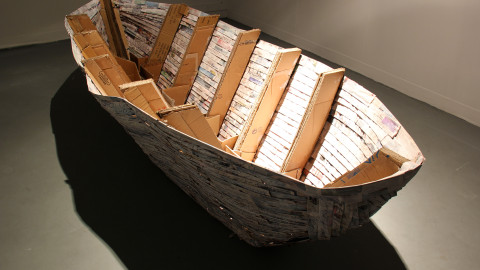 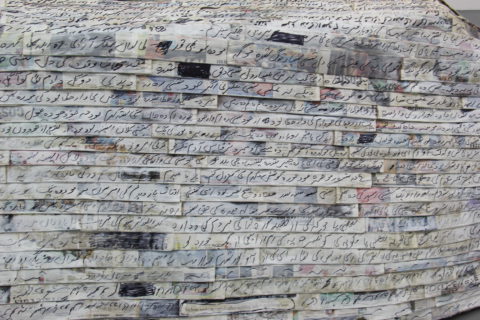 In order to open a dialogue with the public, you printed a photo of the boat on postcards and dropped them in letterboxes across Brisbane, asking people to write down their views on asylum seekers and send them back to you. Could you share some of the responses you received in the mail?

This work is called “Silent Conversation”. Out of more than 1,000 postcards I received about 12 replies, and they were manly positive responses. The stands arranged in a whirlpool pattern on the floor hold blank postcards that represent the people who have not replied yet, and that is where the title of this work comes from. I hope receiving the postcards made people think in their own space and time – in dialogue with themselves in silence about the issue of refugees in this country.

The blank cards also represent the many refugees in detention centres who wish to be part of this community, who are in limbo. They have many questions and many stories to tell, but all they can do is tell those stories to themselves and ask questions of themselves. The question and answers repeat themselves in silence.

What kinds of messages lie behind your reinterpreting of found objects to comment on social and political issues?

I don’t think there is any message as such in reinterpreting found objects. I like depicting familiar objects with unconventional material – the object has a pull factor and the material serves a hidden and gloomy narrative.

“Force Leisure” is another work in which I made a hammock with barbwire. This work is very inviting and tempting to interact with at first glance, but in an instant the material hits you and challenges the perception you have of the object.

Although the process may be more intuitive than premeditated, what other themes do you see yourself tackling in the future?

Well, as an artist I don’t like to limit myself to one theme – I should be able to tackle any issue in society. In saying that, I cannot work on every issue, just the ones that resonate with me personally. I am interested in shapes, objects and reinterpretation of objects. The human body and metaphysics also interest me. 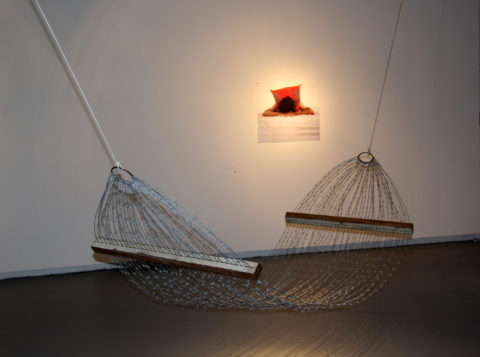 Some responses from the postcards:

Dear Seeker, I am so sorry this has happened to you. I wish you and your family could come and live with me. Good luck, take care. xo

Asylum seekers are human beings the same as us all, trying to live a life worth living. Same hopes and dreams, families, wanting what we all crave ­– security, peace and love.

The issue is not boat people which has been politicised, rather the human rights issues in their countries of origin. I am sure I would do all I could do to protect my family.

Asylum seekers should be accepted anywhere they flee to, however they arrive, and be made part of the community.

Most asylum seekers are unlucky people who happen to have lived in a country where war, persecution and absence of some rights and freedoms have had a dramatic effect on their lives. As a wealthy nation without these problems, we should offer them a chance for a new, safer life in Australia.

Refugees welcome under Australian Government yearly quota and these are legal arrivals. Other persons claiming to be asylum seekers must also come legally to Australia and if a visa is not able to be obtained then stay in your own country and work to make changes to make that country great! It will improve the lives of many more of your fellow citizens.

Sha Sarwari is a multidisciplinary visual artist who came to Australia as a refugee from Afghanistan in 1999. He has a diploma in Graphic Design and currently is studying for a Bachelor of Fine Arts at the Queensland College of Art, Griffith University. He was selected as a finalist for the GAS: Graduate Art Show and The Survey Co. Art Award in 2014 for his work “Silent Conversation”.