As Jess approached the clinic, her friend phoned reception. “We have an appointment at 10am. We’re about to pull in to the car park.” “Great”, replied the receptionist, “our security guard will collect you from the car. And please, try to ignore them.” Scheduled for an abortion procedure, Jess is one of many women who have been subjected to harassment by anti-abortion protesters stationed outside health clinics.

On 27 November 2015, the Victorian Legislative Council passed legislation preventing protesters from harassing people within 150 metres of abortion clinics. The Safe Access Zone Bill, which amends the Victorian Health and Wellbeing Act (2008), requires buffer zones for General Practice clinics that administer the abortion pill RU 486. The law will come into force in July 2016.

The new law prohibits the harassment of, and interference with, a person accessing reproductive health services. The legislation also bans the recording of a person entering a clinic without their consent, as well as any engagement or communication relating to reproductive health services within the exclusion zone. A breach of this legislation could result in a maximum jail sentence of 12 months.

This new legislation underlines a common question raised in humans rights discourse: should limitations be placed on freedom of expression to protect the rights of others?

Human rights and advocacy groups across the state have applauded the bill. Director of Advocacy and Research at the Human Rights Law Centre Emily Howie said the new legislation addresses “another form of violence against women.” Victorian Minister for Health Jill Hennessy stated that, as a result of the legislation, “women will no longer be able to be harassed and intimidated around abortion clinics.”

Unfortunately, harassment and intimidation have become commonplace for medical staff and patients entering health clinics across Victoria. From urging women to reconsider terminating their pregnancy, to allegations of verbal abuse and physical violence, protesters have made their presence well known in this space.

In June 2015, the Fertility Control Clinic in East Melbourne was unsuccessful in a Supreme Court bid to stop protesters who were alleged to have harassed staff and patients at the clinic for 20 years. The protesters are a Christian group, the Helpers of God’s Precious Infants, who hand out pamphlets criticising abortion procedures and hold placards with an array of confronting images. Women have told the clinic that they will not attend their scheduled appointments due to the presence of protesters.

Margaret Tighe, the President of the anti-abortion group Right to Life Australia, stated that the Safe Access Zone Bill was “a tragic day for the smallest Victorians – those living in the womb inside their mothers.” Right to Life argue that protesters are not harassing women entering the clinic, but rather providing counsel and information about abortions. They also argue that the bill violates protesters’ right to freedom of expression protected in the Victorian Charter of Human Rights and Responsibilities (2006) (the Charter). 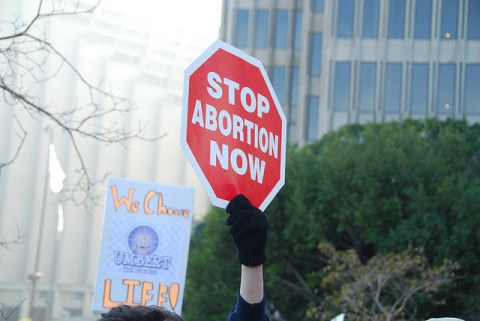 But does the bill really violate the right to freedom of speech, and how can this be reconciled with the rights of women to access safe and legal abortion procedures?

The Charter protects the right to freedom of expression, and is incorporated in relevant state legislation. The High Court has also determined that implied freedom of political communication is protected in the Australian Constitution, which is also applicable at a state level. But according to research by the Victorian Parliament, limits on the right to freedom of speech can be justified in certain instances to “respect the rights and reputations of other persons.” Limitations can also be applied “for the protection of … public order, public health and public morality.”

The Safe Access Zone Bill is a reminder of how freedom of expression can be used by some to obstruct the basic rights of others. The right of women to access a legal medical procedure without abuse or judgement is one instance where such limitations are justified.

The new legislation does not prohibit right to life groups from expressing their views on abortion through other channels. Protesters are free to distribute material, campaign for anti-abortion measures, and even assist women seeking religious counsel or otherwise on their reproductive choices. All of this can be done outside the 150 metre exclusion zone. But the Safe Access Zone Bill does provide women with a measure of protection, so they can exercise their right to access health services independently, safely and privately.