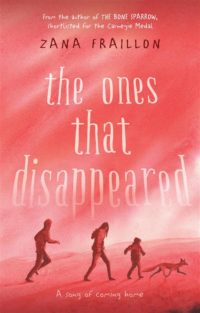 The Ones That Disappeared
Zana Fraillon
Hachette Australia

Melbourne author Zana Fraillon follows up her acclaimed novel, The Bone Sparrow, with a grippingly taut and, at times, harrowing tale of three children captured by traffickers.

The Ones That Disappeared wastes no time hurtling us into the heartbreaking world of our young protagonists – Esra, Isa and Miran. Living as slaves to the Snakeskin gang (a tattooed criminal outfit that foist phoney debts onto youths and force them to work off their debt to secure their freedom), the trio oversee the cultivation of the gang’s marijuana crop.

They manage to escape, but Esra and Isa quickly become separated from Miran when he is caught. Injured during the escape, Miran pleads with Esra and Isa to leave him behind, and he quickly finds himself under police guard in hospital. Desperate to reach him before the Snakeskins do, Esra and Isa befriend the streetwise Skeet, a kind urchin whose best friend is a pet toad, and who knows all too well how cruel adults can be. Navigating a subterranean underworld of poverty and danger on their journey to be reunited with Miran, the group are determined to forge a happy, free future together.

Alternating chapters switch the reader’s perspective from that of Esra, Miran and Skeet, and there is a distinct point of difference in the unique tone and voice of each character. The main tension comes from the ticking clock that is Miran’s dire predicament, but Fraillon effortlessly shifts between Miran’s situation, including his dazed observations from his hospital bed (written all in italics, a neat stylistic choice), to exploring the growing camaraderie between Esra, Isa and Skeet.

The animal kingdom can be both a thing of beauty, but also a ruthless and cruel place in which only the strong survive.

The sinister nature of the Snakeskins, the birds, foxes, toads and other wildlife Esra and Isa encounter while in the outside world carry perhaps the novel’s most successful and interesting message – the animal kingdom can be both a thing of beauty, but also a ruthless and cruel place in which only the strong survive.

The Ones That Disappeared is an unhurried but endlessly gripping tale, told with heart and affection, encompassing both light and shade. Skeet’s kindness helps Esra to regain her humanity and redirect her on a happier path, while the spectre of human trafficking, both in the novel and in the real world, is haunting throughout.

Wisely, Fraillon avoids becoming too specific about the nation her story takes place in and this ambiguity gives the impression the story is meant to represent all child slaves in all corners of the world.

The number of children enslaved in the world right now exceeds the entire child populations of Australia, New Zealand, Scotland and Wales combined.

The book notes that at present, more people are enslaved than there has been at any other time in human history; that the number of children enslaved in the world right now exceeds the entire child populations of Australia, New Zealand, Scotland and Wales combined. Slavery is reportedly the fastest growing criminal industry in the world, generating more than $150 billion annually. It is estimated that 151.6 million are in child labour and that there are a further 10 million children in slavery, trafficking, debt bondage and other forms of forced labour, forced recruitment for armed conflict, prostitution, pornography and other illicit activities.

There are many shocking stories of child slavery around the world, from the estimated 40,000 children forced to work in Congolese cobalt mines, to situations similar to the one presented in the book where children kidnapped from Vietnam are forced to work in cannabis farms right in the heart of London. Sadly, a lot of trafficked children are often forced to work in seemingly innocuous locations away from the public’s eyes, such as restaurants, nail salons and farms.

The presentation of real life facts are a sobering addition to Fraillon’s book, and while her work is fiction there is an intention to provoke a conversation about a very real problem.

The vivid portrait she paints of her child characters makes it almost feel like you are hearing the written testimonies of survivors.

With this said, Fraillon’s book is never preachy or designed purely to shine a spotlight on slavery, it is first and foremost, a character study of freedom lost and rediscovered, of the unshakeable bonds of friendship that could only exist among children of these ages, and of the need for hope in the face of unimaginable horrors. The vivid portrait she paints of her child characters makes it almost feel like you are hearing the written testimonies of survivors.

The Ones That Disappeared is ultimately an uplifting read, filled with vivid characters whose voices often remain silent; it’s a quiet, emotionally devastating work unlikely to go unnoticed in the literary world.

The Ones That Disappeared is available from Hachette Australia.