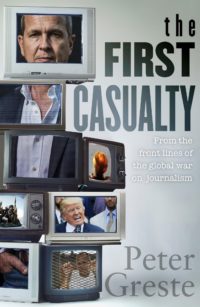 The First Casualty: From the Front Lines of the Global War on Journalism
Peter Greste
Penguin Viking

Despite the fact that recent technologies have made it easier than ever to access and distribute information, in recent years, there has also been an increased presence of censorship in the name of national security, as well as unprecedented surveillance of our data.

While these issues affect a broad range of people, they are particularly harmful for journalists, who now face significant challenges when it comes to reporting on certain events, thereby making it more difficult for them to fulfil their role as the Fourth Estate. Threats are now a common occurrence. In 2017, at least 44 journalists were killed while reporting. Of those, 18 were murdered. According to a recent Committee to Protect Journalists report, the number of journalists jailed for their work reached an all-time high in 2017, with a total of 262 reporters put behind bars.

As if these figures aren’t harrowing enough, the so-called “war on journalism” feels especially prevalent while reading Australian foreign correspondent Peter Greste’s memoir, The First Casualty. Amidst an increasingly precarious news media, this book provides a timely and vital account of both the treatment of journalists by government authorities, as well as the broader implications of restrictions on press freedom globally.

No stranger to conflict zones, Greste spent two decades reporting the news from the front lines of some of the most dangerous conflicts in Afghanistan, Iraq and Somalia. When he and two colleagues from the Al Jazeera network were arrested in Egypt in 2013, Greste became a household name. Accused of spreading “false news” during his coverage of the aftermath of the military overthrow of then-president Mohamed Morsi, Greste endured both solitary confinement and detention for 400 days.

“Time, such as it is, becomes meaningless without markers,” Greste comments on his solitary confinement. “Time is vast, but that vastness poses no threat or discomfort if the view to the distant edges is obscured by things-that-must-be-done. Without any of those flags, a minute, an hour, a day, a year become the same thing: unfilled space. And the sheer emptiness of that expanse becomes terrifying.”

It is, at least in part, thanks to this experience that Greste has the expertise and gall to describe, in depth, the vast impact that recent changes have had on news media across the globe.

Although The First Casualty focuses primarily on Greste’s imprisonment and acts mostly as a memoir, recounts of specific events, such as his arrest, interrogation and trial, also provide a complex narrative regarding both the state of journalism and the War on Terror. By outlining his work as a journalist – from his very first experience as a young correspondent in Afghanistan in 1995 to today – he is able to concretely show how the media has evolved since the attack on the Twin Towers in 2001.

“In that post-9/11 world […] journalists were suddenly the enemy, and therefore legitimate targets to be attacked and murdered with impunity. If this change wasn’t immediately apparent at the time, it was because most of us were still consumed in reporting on – and surviving – the chaos of the war.”

More than simply a collection of stories, Greste alternates between recounting his experience in Egypt and the key moments in the War on Terror, to reflect on the broader implications that both have had on press freedom. From Australia’s metadata laws and Trump’s war on “fake news”, to the murders in the French satirical magazine Charlie Hebdo, Greste highlights some of the fundamental changes to journalism and argues passionately for solidarity among journalists in the fight for freedom of the press.

As governments across the globe crackdown even further on the press, Greste’s memoir provides a stark reminder of the importance of a free, independent media. His writing is passionate, and provides fascinating insight into the life of a foreign correspondent. The First Casualty is a powerful and necessary read for anybody interested in journalism.

The First Casualty: From the Front Lines of the Global War on Journalism is available from Penguin Viking.