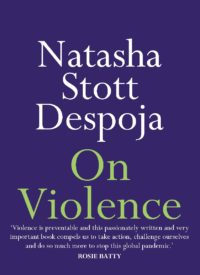 The On Series by Melbourne University Publishing are touted as “little books on big ideas” and feature well known writers and identities covering topics such as Germaine Greer writing about rape, Leigh Sales on doubt and Stan Grant on identity. Natasha Stott Despoja’s contribution to the series, On Violence, focuses on violence against women as a national emergency, requiring community and political action to prevent it.

With extreme levels of violence, sometimes resulting in death, against women in Australian society Despoja argues that there is a need, “…to change the story that ends in violence against women, we must begin with gender equality and respect for all women”. Working through alarming statistics where on average women die weekly at the hands of someone they know, to noting that Aboriginal and Torres Strait Islander women are subject to violence more than thirty-times the rate for non-Indigenous women Despoja is unapologetic in calling for changes in how society has, for the most part, turned a blind eye to these issues.

That’s not to say that there are not organisations or individuals currently working to create better frameworks with which to deal with, and hopefully stem, this national emergency. Despoja refers to Rosie Batty’s tireless campaigning for recognition of family violence and changing the ways in which it is dealt with as part of policy reform. The book talks about the issue of promoting gendered behaviours, the lack of diversity in being able to illustrate to children their worth as members of humanity, rather than an identity structured around gender and the importance in actively changing the narrative around violence through primary prevention strategies.

Written more as a conversation between the author and the reader than a formal essay On Violence is easily accessible which is important when considering the topic of discussion and the barriers that are often placed around them that need to be broken down. In the chapter “Respect”, for example, Despoja points towards the need to ensure education around respectful relationships occur at an early age so that younger generations have a sense of what is and isn’t acceptable in a relationship.

Education around respectful relationships is one such way to challenge the status quo on approaching and quashing violence, but it requires the full support of government to ensure wide and even reach. Despoja conversely notes that such discussions precipitated Prime Minister Scott Morrison as being very vocal about enrolling his own children in a school that didn’t impose “the values of others” on his children.

On Violence makes it clear that there is much work to do in this space, from victim blaming to reluctance to educate Australia’s youth about meaningful and respectful relationships to acknowledgment of violence against women as being at epidemic proportions and having consistent constructive frameworks in place to deal with it. It also makes it clear that we, as individual members of society, can be proactive in creating an Australia where all women are respected and not subject to violence, where our grandmothers and mothers, our sisters, our cousins, our friends and ourselves are as safe in our private lives as we should expect to be in our public lives. It’s a small book with an incredibly important message, one that everyone should hear.