Sweden-based scholar Tobias Denskus calls it “aidnography” – the burgeoning genre of reflection on practices of international aid and development, comprised of blogs, novels, memoirs, and anthologies. The best of this genre, as illustrated by Denskus’ website, delivers a nuanced and complex picture of these practices – probing the assumptions, expectations and agendas that are brought to the work of realising human rights.

I wish to suggest that (at least some of) these aidnographies are a product of, and contributor, to an increasingly self-aware discourse on helping and solidarity in the aid and development industries and its adjacent practices.

Some of the more recent iterations of this discourse include the “End humanitarian douchery” campaign, Xenium Production’s “The Samaritans”, the blog “Stuff Expat Aid Workers Like”. As well as basically all the commentary on Bob Geldof’s third attempt to re-create Band Aid.

The campaign #endhumanitariandouchery seeks to promote critical reflection on volunteer work conducted by non-locals in places where there is much impoverishment and/or conflict. It poses “fair trade learning” as a tool for minimising, well, douchery – that is, the often uncritical, self-indulgent, and exploitative behaviours of the white Westerner in a community that shares none of his or her privileges. “Fair trade learning” emphasises things like “mutual and reciprocal relationship-building”, “community-driven initiatives” and “transparency, specifically in relation to economic relationships and transactions”. All up, the campaign has eight key steps to not being “that guy” on the school building project in a developing country.

“The Samaritans” is “a comedy about an NGO that does nothing”, focusing on the Nairobi field office of an international organisation called Aid for Aid. It pokes some serious fun at the “stock characters” of the aid and development landscape: the dipsomaniac director, the white American graduate who believes he’s saving Africa, the random annoying office guy; all set against a backdrop of post-its, acronyms, and alcohol.

“Stuff Expat Aid Workers Like” also includes alcohol, preferably “indigenous” brews, so you can talk about it when you are back home in the First World.

If these ventures are anything to go on, the future of human rights work will be nothing if not reflexive. In 2015, everyone from the voluntourist to the UN program manager, if they’re at all aware of the context in which their work takes place, will be going forth with the knowledge that this work is fraught by the exact injustices and historically unsettled power relationships that cause the abuse of human rights in the first place. Many will understand the complicity of allies, the condescension of #firstworldproblems, and the possibility that Latin America, like Africa, is not actually a country. They will know when the language of human rights is being used as a justification for abusing human rights, and they will be acutely aware, nonetheless, of the possibility that they themselves may still fail. Catastrophically.

Those attuned to this discourse are likely to at least be able to lampoon their own motivations and recognise the systemic limitations of their practice. They will be positively distinguishable from the missionary, the White Saviour, and Angelina Jolie. They’ll be down in the fieldloc teamhouse with @AidWorkerJesus, singing “Feed the World” ironically. 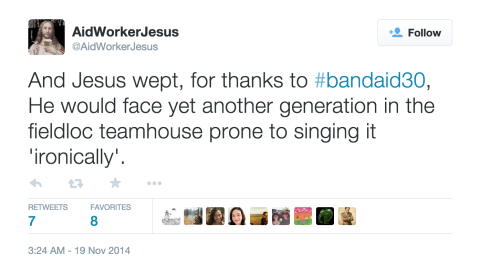 The domination of irony in this self-aware discourse of helping is also itself a limitation. Irony can create a weary distance between ourselves, as the knowingly critical subjects of human rights work, set apart from the unenlightened “others”. As philosopher Lilie Chouliaraki demonstrates, irony has become the register in which solidarity is performed across our mediatised globe, to effects that are ambivalent at best. Irony is an intimately powerful device that we use to show what we know and to express how we feel about what we know (i.e. bad). Crucially: it often works to remove ourselves from complicity in what we know (because, bad). So, if it’s the only way in which we “do” critique, we risk creating a closed loop of sly righteousness.

Australian crew WhyDev turns an eye to some of the ways in which human rights work can change where it needs to, whilst also still doing the important labour of laughing at ourselves. Their forthcoming “Devie Awards” for development practice includes categories like “Yeah, nah”– for successfully preventing (or gallantly attempting to prevent) an irredeemably bad idea (or rule or process) from going ahead. And “Deviant” – for challenging the norms of practice in an organisation or community to do something differently with positive outcomes.

We need human rights work to be reflexive, without being recursive. The examples above suggest that such a future – critical, generative, and able to bring the lolz as required – may be on its way.

Ann Deslandes is a writer and a support worker in Sydney. Her writing is collected at xterrafirmawordpress.com and she tweets as @Ann_dLandes. Ann likes anticolonial feminism and capybaras.