Kelly is well known internationally as a humanist artist with his art often being part of the dialogue in places in transition from war or oppression to newfound civil society including the Republic of Georgia, Northern Ireland, South Africa and the Basque Country (Spain). He is the only visual artist to be given the prestigious Courage of Conscience Award (Boston, USA) – other recipients include Mahatma Gandhi, Martin Luther King Jr, Muhammad Ali and John Lennon. In 1998 he was invited to create a work for the 50th Anniversary of the United Nations Universal Declaration of Human Rights International Print Portfolio, for which the forward was written by Kofi Anan. His landmark book Art and Humanist Ideals (Macmillan) outlines the contribution of contemporary artists to the dialogue on significant issues of our time.

This is a small exhibition of Kelly’s drawings and prints. All works are shown courtesy of MARS Gallery, Melbourne and are copyright of the artist.

The exhibition has been dedicated to Shaun Tan. 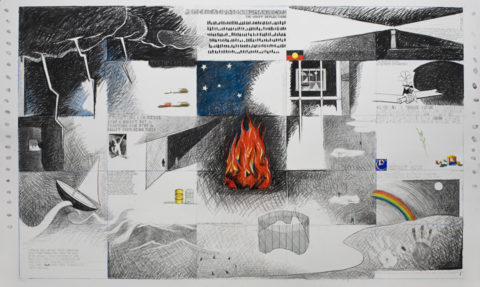 This is an ‘on-site’ drawing made in Melbourne. My thoughts included civilians killed in the Iraq War, asylum seekers, those who have no voice and the work that many do towards ending injustice. I know art can make a difference and on this drawing I wrote the words “A painting can never stop a bullet but a painting can stop a bullet from being fired.” 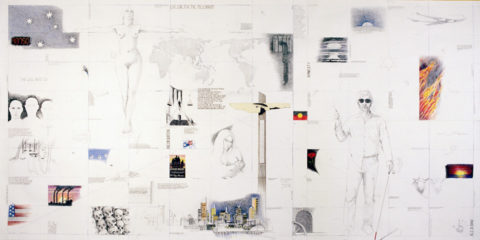 This work was included in an exhibition entitled ‘Unconditional Love and Goodwill’. As we approached the year 2000, I considered not only our missteps with the environment and with each other, but also our successes and strivings – whether in the “Troubles” of Northern Ireland, in our own hopes for reconciliation with our Indigenous communities or in actions toward world peace for our children. 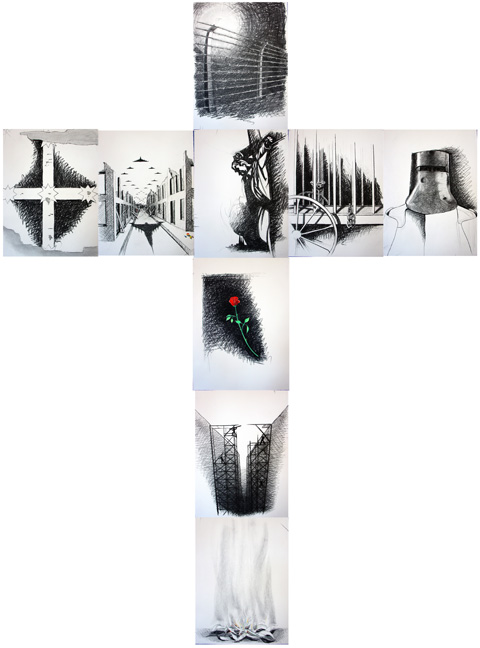 This is a tribute piece to the late artist Noel Counihan and the conversations we had about peace, justice and shared humanist concerns. The central image relates to a print of his, referencing Aboriginal artist Albert Namatjira, while all 9 panels are each dedicated to those who have worked for a better world, including authors Elie Wiesel, Kurt Vonnegut, Joel Deane, Aboriginal artists Lin Onus & Benjamin McKeown, and others. 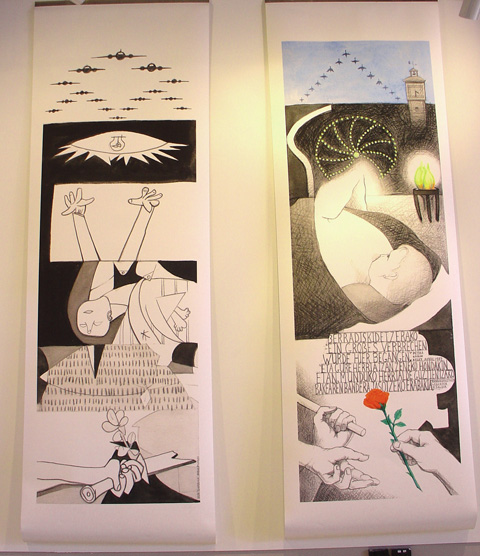 Picasso’s powerful painting Guernica is an enduring image of the tragedy experienced by this village. On the left are references to his 1937 work and on the right how I experience it today – a place where survivors say “We forgive but we will never forget” – a place of great importance to the peace movement. Made first as a limited edition print and later, at the request of the city of Guernica, they were reproduced as 1.7 x 5 m banners and hung in the town square. The banners were also reproduced for exhibition at the Shrine of Remembrance in Melbourne.

Plaza of Fire and Light: Place of the Peacekeepers – Foru Plaze, Guernica

I was asked by the city of ‘Guernica’ to create a work for the commemoration of the bombing. This temporal installation refers to an ancient Basque symbol of the sun and at the launch these words were read in 6 languages, “A central fire for all who have died in war and acts of violence and 1000 candles burn through the night in commemoration of lives lost in Guernica and as a promise of commitment to the future of our children.” I was honored that it has been said that “after the ‘Guernica’ of Picasso, this is the next most important symbol of the bombing.” 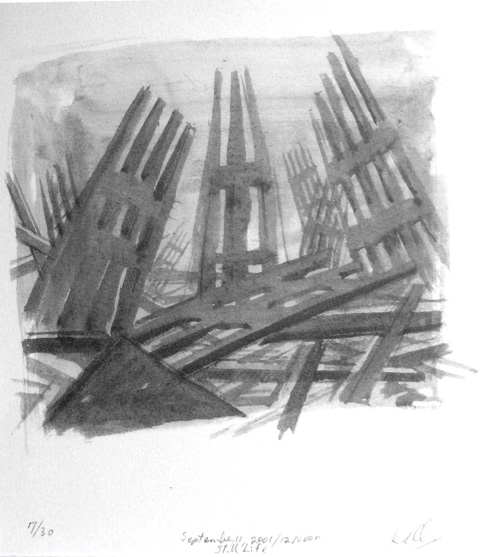 When I turned on the television just as the first plane crashed into the World Trade Centre I sketched for hours from images that flickered in front of me. I somehow needed to put these sad, tragic, horrific images down on paper. Each has the date of the drawing – September 11 and the time it was done. Following this I was to make this print of the iconic steel framework. 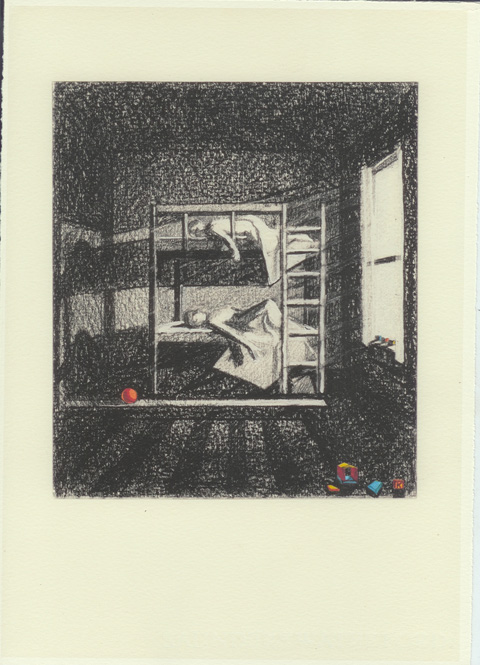 With all of my work, the primary thought has always been for my children and now also, grandchildren and the children of others. Why do people have children if not to love and nurture them? Why destroy their future through war and environmental destruction? What kind of world are we passing on to them?