These Are the Names | Tommy Wieringa 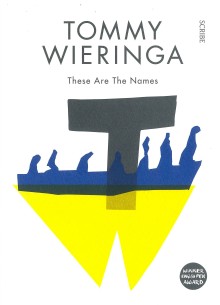 There’s something of the end times in Tommy Wieringa’s These Are The Names. Pontus Beg, a middle-aged police commissioner in the fictional middle-world town of Michailopol, watches as a storm gathers on the horizon. A seemingly impenetrable distance away, the sky over the steppe crackles as a ragged group of refugees, biblical in number, “lay huddled against the storm … like the first humans on earth”. They remain unnamed for much of the novel.

These Are The Names is the celebrated Dutch writer’s ninth novel and his third that has been translated into English. Winner of the 2013 Libris Prize, These Are The Names is a departure from his energetic and well-received previous novels Speedboat and Little Caesar, both translated into English by Sam Garrett to wide acclaim. Garrett’s translation is deft and understated, which compliments the occasionally heavy-handed biblical subtext that permeates much of the novel.

“This is a novel obsessed with the power of names; their history, their weight and their sense of being, but it is not names alone that preoccupy Wieringa.”

Drifting slowly into old age and weighed down with the quiet agony of a spiritual man stuck in the uniform of a mid-level cog, Pontus Beg grasps at barely remembered memories and chance discoveries – of his mother’s Jewish ancestry, of the unidentified body of a young woman found on the side of the road, of the sudden appearance of a group of haggard and dismal looking refugees, whose arrival panics the town and which forms the backdrop of much of the novel.

“To discard one’s old soul, that frayed, worn thing, and get a new one in its place”, muses Beg, “Who wouldn’t want that?” The world we live in is one of nameless asylum seekers, shifting human landscapes, and unspeakable cruelties inflicted on those of us that are most vulnerable. In this, These Are The Names explores a central and pressing question of our time.

This is a novel obsessed with the power of names; their history, their weight and their sense of being, but it is not names alone that preoccupy Wieringa. It’s our ownership of them, our claim to these fixed points of reference. After finding out that his mother’s maiden name may have been of Jewish origin, Beg seeks council from the last Rabbi in Michailopol. The rabbi is frank: “The point”, he says, “is whether or not you came from a Jewish womb. That’s what it all boils down to”.

Then there are the nameless refugees. Theirs is a negative search; the flat, limitless expanse of the steppe is their constant companion, a reminder that their existence is so negligible that it may well as not be an existence at all. During their journey, they are deceived by people smugglers, who have set up an elaborate fake border crossing. The smuggler’s first demand is that of erasure, as the nameless are instructed to tear up their papers.

Five men, a woman, and a child. Soon, a conflict arises within the group, and acts of compassion are repaid with cruelty. We learn that they had names, but what are names to those without a place to fix them to? When they arrive, like apparitions, one winter morning in Michailopol, it is little wonder that the townspeople take them for the walking dead.

Despite the poetically apocalyptic atmosphere (with shades of Cormac McCarthy in his full Old Testament regalia), there are moments of rare humour in the novel, which breathes an energetic life into the narrative, helping it sustain its momentum. However, this momentum flags towards the end as Wieringa succumbs to the allure of the neat conclusion, which highlights the novel’s more worrying habit of finishing its own sentences.

Ultimately, however, These Are The Names remains a deeply compassionate and poetic achievement. Wieringa draws a thread from the heart of man’s worst impulses and excesses and unearths a deeper truth: that, where there is sin, there is also the hint of redemption. An end to exodus.

Shares
Comments Off on Where there is sin, lies redemption: A story of refugees