Guerrilla Girls are a group of artists and activists that aim to expose the inequality that women and people of colour experience in the art world. Like anarchists out on a demonstration, they are anonymous and don gorilla masks. The collective began in New York in 1985. Portfolio Compleat is a comprehensive record of the Guerrilla Girls’ work which consists of 129 projects in the form of posters and a video installation spanning from 1985 to 2016.

It has taken art galleries and museums 100 years to discover female artists although they have always been there. But, according to the Guerrilla Girls, no female artists names are inscribed on the facades of art galleries and museums. The Guerrilla Girls’ Portfolio Compleat forces me out of my complacency brought about by a patriarchal society; when I posed nude at art school the male artists asked for a different model, one with a better body.

The Guerrilla Girls exhibition consists of a video installation, a glass display cabinet and paper print out posters that force galleries and male artists to take account for the way they exclude women and people of colour. All those groovy male artists that you love such as Jean-Michel Basquiat and Keith Haring are responsible for allowing their work to be shown in galleries that show no more than 10 per cent women or none. All those cool galleries such as Blum Helman, Mary Boone, Leo Castelli etc are responsible for showing no more than 10 per cent women or none in 1985.

In 2014 galleries listed below show 20 per cent women or none. According to the Guerrilla Girls, women make ceramics, but they don’t sign so we don’t know their names. Women make quilts, but quilts are considered craft not art. Out of the 71 artists at the Guggenheim Museum there where three white women, one woman of colour and no men of colour. They say that it is worse in Europe than the U.S.

There are only two per cent artists of colour at the Ludwig museum. In Cologne there is a population of 14 per cent Turkish people but only one per cent of Turkish artists are exhibited at Ludwig. Ludwig Museum tried to do a more diverse exhibition, but it was still 69 per cent men and 61 per cent white.

According to the Guerrilla Girls galleries and museums in the U.S and Europe do not show the history of art, but merely the history of power and money. A friend said ‘you’d think in this modern age the statistics would not be that bad’ but modernity can be fascist. 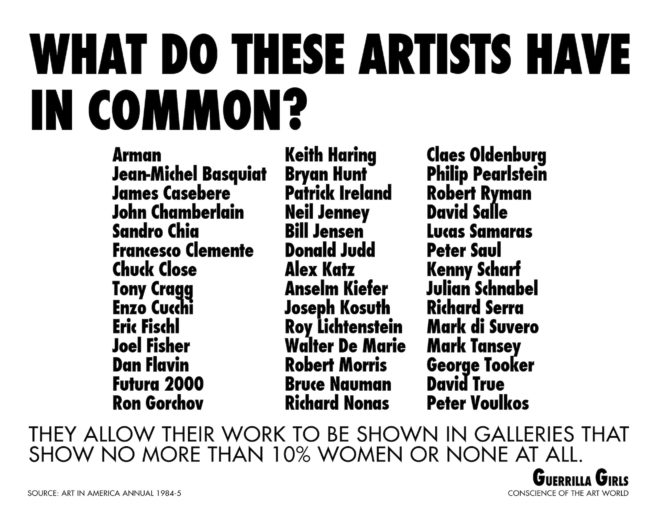 They recommend using the F word for feminism. They also recommend intersectionality, which is acknowledging how race, class, ability, sexualities intersect with gender.

Shares
Comments Off on Tough love for Museums! The Guerrilla Girls continue to strike back

Portfolio Compleat is showing at the National Gallery of Victoria until November 2018.