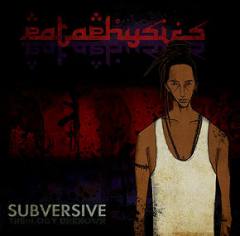 The perennial, highly fraught subject of the treatment of asylum seekers in Australia and the wider spectrum of racism and xenophobia that dictates our national policy debate on the issue has been expertly deconstructed and explored in a number of mediums.

Recently these issues have been the central focus of films (such as Jessie Taylor’s Between the Devil and the Deep Blue Sea), novels (Robin de Crespigny’s The People Smuggler) and non-fiction books (Tim Soutphommasane’s Don’t Go Back to Where You Came From).

Joining the fray is outspoken Melbourne-based hip hop artist Patrick Marks. Performing under the moniker Pataphysics, the Sri Lankan-Australian Marks has recorded, produced and mixed from start to finish a treatise on neo-colonialism, racial discrimination, the abysmal treatment of asylum seekers, and Australia’s anti-terrorism laws – the fourth of which forms the backdrop to Pataphysics’ recently released album Subversive.

Melded together by hypnotic tracks that interweave improvised beats, dope bass lines and a range of instruments … Marks’ potent lyrics remain centrestage throughout.

Ostensibly political and cognisant without veering into the murky waters of didactic moralisation, Subversive is not so much insurrectionary as it is honest, raw and edifying. Spurred on by the 44 anti-terrorism laws (including ones that restricted media reporting on national security matters in courts and subjected people to house arrest without trial) that were passed by the federal government between 2001 and 2007, Marks uses the 13 tracks in Subversive as a platform to delve into the infringement of civil liberties and human rights that take place in everyday Australia.

Melded together by hypnotic tracks that interweave improvised beats, dope bass lines and a range of instruments – from the trumpet and flugelhorn to panpipes and spoons – Marks’ potent lyrics remain centrestage throughout. Early track “Welcome” sets the tone for the album. In a clear nod to the reggae, soul and jazz of yesteryears, jaunty soul-inspired hip-hop intersperses with the sporadic beats of the Indian bongo-equivalent tabla and the reverberating silky richness of the trumpet that Marks is well-known for. Amid the infectious beats, Marks’ rapping features politically-charged catchwords such as “forced migration”, “marginalised community”, “dispossessed refugee” and “racial extermination”. When combined, they depict a side of Australian not often divulged in mainstream media – one synonymous with genocide, crimes against humanity and disenfranchisement.

“Put em’ in a prison and we’ll deny them, the due processes of the law, their rights on suspension, locked in detention, they never get a mention”

A consecutive flow of rhyming buzzwords makes up the highly catchy and self-proclaimed “standout” track ‘Cause It’ where Marks collaborates with American hip hop DJ and turntablist Rob Swift. Arguably however, the most notorious track of the album remains ‘Treason’, a critique on anti-terrorism legislation interlaced with news bulletins on terrorism and contentious lyrics which purportedly broke Australia’s terrorism laws.

“Colonisation was the first terror against this country; don’t go telling me about the Sydney Hilton bomb or Bali…nothing compared to government policy”

The more soulful “Over” features reggae, grime and hip hop singer Vida Sunshyne and departs from the overarching hip hop sound for a more laidback, lounge feel. ‘Self’ has an anthem-like feel to it as Marks collaborates with NAF, while “Direct Action” calls for an end to the loss of independence experienced by indigenous communities under the Northern Territory Intervention. In homage to the work of Indian political activist and author Arundathi Roy, “One More Thing” draws on and remixes words uttered by Roy on her brand of activism.

With the three-man Pataphysics’ roots hailing from corners as disparate as Sri Lanka, El Salvador and New Zealand, Subversive is a mixed bag of entertaining insurgent rap and thought-provoking socio-political expositions on human rights in Australia – right from the ill treatment of Aboriginal people through to the mandatory detention that awaits many an asylum seeker upon their arrival on Australian shores.

In a crucial and powerful reminder of the inhumane treatment of asylum seekers – brought to the fore by freshly reinstated Prime Minister Kevin Rudd’s new hardline asylum seeker policy – Marks also wrote a new track entitled “Asylum is a Crime” and put together an accompanying video, which can be viewed below:

Marks has partnered with Australian not-for-profit RISE (Refugees, Survivors and Ex-Detainees), with proceeds from sales of the track going to RISE.

Shares
Comments Off on “Subversive” by Pataphysics – Mid-week Review