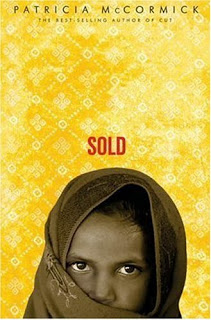 Human rights’ stories centred on child protagonists have become increasingly prevalent, as writers delicately trace the exploitation of their civil liberties and the ensuing acceptance and desensitisation that accompany these atrocities in a self-perpetuating cycle of poverty, deprivation and barbarism.

Sudanese writer Majok Tulba did it in Beneath the Darkening Sky with his depiction 11-year-old Obinna’s struggle to retain his sense of self amid the moral corruption and inextricable acts of cruelty that accompany his rite of passage as a child solder. Inspired by real-life land mine victim Sofia Alface, Swedish crime writer and children’s author Henning Mankell centred his novel Secrets in the Fire on a little girl in Mozambique who loses her legs to a land mine.

American author Patricia McCormack deployed a child protagonist in Never Fall Down with 11-year-old Arn, who becomes the object of Khmer Rouge’s tyrannical and brutal regime, and does it again in Sold – this time shifting focus to the insidious human rights violations that occur when young Nepalese girls are sold (either intentionally or unwittingly) into the convoluted web of human trafficking.

Lakshmi is a precocious 13-year-old who lives in abject squalor and paucity with her beloved mother, infant sibling and a gambling-addicted stepfather. Wretched as their living conditions are, Lakshmi is a relatively happy girl who occupies herself by helping out her Ama (mother) with the domestic chores, playing with her black-and-white speckled goat Tali, and occasionally dreaming of the boy she has been betrothed to – Krishna. All this changes however when her family’s crops are wiped out by the monsoon and her unfeeling stepfather does the unthinkable.

Written in first perspective, in the infantile and frank voice of Lakshmi, readers are left to piece together what is happening from the young narrator’s feelings of dread and confused observations.

“I do not understand. I can carry a load of firewood so heavy it would put a man to shame, and my legs are sturdy enough to climb the mountain a dozen times in one day. What does it matter that I have no hips yet?”

“Across the hall, in another room, where a red cloth is hung across the doorway, I hear the sound of grunting. It is a strange, animal sound that makes me shudder.”

It is what it is: atrocities that are experienced with a certain detachment as Lakshmi gradually shuts down to cope with the violence being committed towards her.

The chapters in Sold are brief and abrupt, or meander in parts – symptomatic of a young child’s erratic thought process. Yet with a voice that stays vivid, convincing and strong until the end, Lakshmi’s ability to meticulously describe what she sees with the utmost clarity imbues the novel with colour in an otherwise dark and discomfiting landscape.

“I study the scene in front of the bus the way I studied my letters in school. Gradually, I begin to make out a kind of order in all the disorderliness, a pattern to it all. It is like a river, where the currents of buses and trucks and people and animals flow into and around each other. If you look hard enough, chaos turns into order the way letters turn into words.”

The encroaching sense of claustrophobia, the palpable misery, and the inescapable feeling of despair as Lakshmi’s hopes are dashed time and time again are acute and tangible – thanks to McCormack’s evocative writing – while the depiction of violence is neither superfluous or lurid nor sentimentalised. It is what it is: atrocities that are experienced with a certain detachment as Lakshmi gradually shuts down to cope with the violence being committed towards her.

“I stay upright until she is gone. Only then do I slump to the floor and touch the side of my head. My earring comes off in my hand, bloodied, but intact. And I know then that my earlobe has been torn clear through.”

Similarly, McCormack resists painting Lakshmi’s experience as a child prostitute with a wholly black brush. There are redeeming qualities to life in a brothel as Lakshmi forges enriching friendships with the bright child of a fellow prostitute, a boy who delivers tea to the house daily, and the girls around her – each stuck in a similar predicament.

Where the novel falters is in the lack of depth assigned to seemingly evil characters such as “Auntie Bimla” – who recruited Lakshmi as a young prostitute – and Mumtaz, the cruel despotic pimp who rules over the girls. Never does McCormack delve into their history or the reasons behind their impenetrably harsh outlook on life. As a result, they are rendered one-dimensional, stilted and unbelievable instead of what they likely are – casualties of the same cycle of abuse, poverty and exploitation that reduced Lakshmi to a victim of the sex slavery trade. The novel also occasionally veers into the murky territories of “the white man’s burden” as Lakshmi eventually finds salvation in the hands of an American man.

That aside, Lakshmi’s story is an incredibly crucial account indicative of the 12,000 Nepali girls who are sold by their families into a life of sexual slavery and nearly half a million children who are trafficked into the global sex trade annually – propelling the issue of child slavery into the forefront of human rights violations and one of the most pressing moral dilemmas of the century.