This year, the Rhythm and Rights festival day for HRAFF was held at the Abbotsford Convent, Melbourne, on Sunday 15 May. Festivities ran from 12:30 to 6:00 pm. Now in its fourth year, Rhythm and Rights forms a celebration of musicians, dramatic artists and performers from Australia and around the world.

Admittedly, it was virtually impossible for one reviewer to take in everything the day had to offer. The following provides a snippet of what was on show for an avid audience – with a humble mention offered to others I didn’t have the good fortune to appreciate.

In the main musical hall, Wurundjeri-willam Clan member Ian Hunter gave a generous Welcome to Country at the beginning of the afternoon. MC Trent McCarthy followed up, working the comfy, beanbag-seated crowd with humorous jokes and anecdotes. Musical acts performed in the hall throughout the day, beginning with dynamic African-Australian rap artists Mxc Wol and Nyuolly.

Others included the MASSIVE choir and, later, Achol and the Uprising Rebels, both highlights for this reviewer. The harmony of the choir was certainly something to marvel at. It’s humbling to witness a group of people singing together, so connected and aware of each others’ voices that it seems, at times, they might be one person. Achol and the Uprising Rebels had the stage veritably levitating with their Marley-inspired reggae beats.

It’s humbling to witness a group of people singing together, so connected … they might be one person. 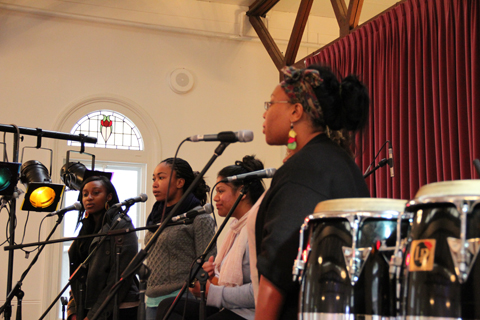 Such heart was in every one of the day’s musical performances, which later included acts such as Ida Ibrahim, Mei Lai Swan and Tijuana Cartel.

There were also performance art shows from various contributors, including Ondru, who gave an incredibly affecting performance entitled On My Way to Asylum. Ambiguous Mirrors – a fusion of puppetry, poetry and music – was presented by Andy Jackson and Rachael Wenona Guy.

Ondru … gave an incredibly affecting performance entitled On My Way to Asylum.

Western Edge Youth Arts offered two performance pieces, one of which bore the title Playback West. This is a program in which the performers ask their audience to offer life experiences, thoughts and feelings connected to human rights issues, immediately transforming them into improvised theatre.

As Richard Pettifer, a volunteer with Western Edge, told me: this can be “cathartic or very therapeutic” for the audience member. Playback West provides an outlet for the diverse group of performers it showcases, who work intuitively and empathically with their audience to produce some truly memorable performances. This is also a chance to reflect artistically on issues of human rights, which often play a part in migrant communities from the West of Melbourne and throughout the country. 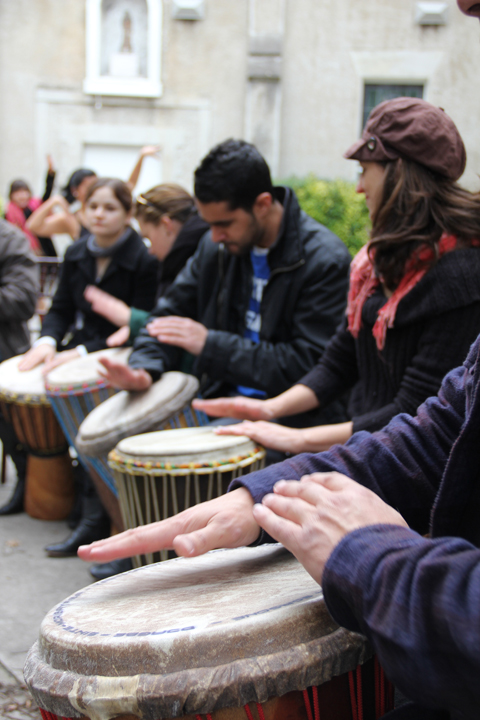 Charity and market stalls – including one for Right Now – were a feature, with representatives from different groups and organisations from across the country present. I roved the grounds conducting impromptu vox pops with passersby and volunteers. 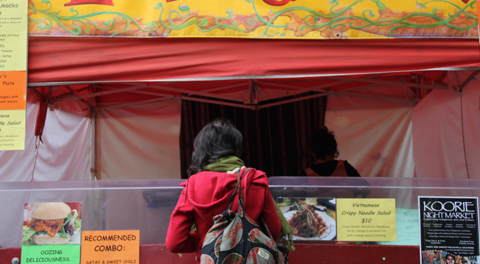 I chatted with Jessie Smith – co-founder of Supporting + Empowering Women (SEW) – an organisation that employs HIV positive women in Arusha, Tanzania. Jessie says, “it’s really apparent that jobs are the best way to empower women, and then they can take control of their lives”. It was through realising this that Jessie became “really enthusiastic about the idea of an employment-based development project”, where the women have rights, bargaining power and a renewed sense of agency.

I had a relaxed chat with Festival Director Matthew Benetti, who is in his second year of overseeing HRAFF in this role. Since arriving with the early crowd who put in the hard work to set-up, Matthew took in acts such as David Cosma and Candice Monique, both of whom he thoroughly enjoyed, along with Ondru.

I also spoke with volunteers at Rhythm and Rights. Each showed a spirit and enthusiasm for HRAFF – and for volunteering – that left me feeling inspired. One person told me they volunteer because they “love meeting people” and they like to do something for society that is good for everyone. Another said that “the Festival is a really good idea” for raising awareness of human rights, through art and performance, making the issues more “accessible”.

Each showed a spirit and enthusiasm for HRAFF – and for volunteering – that left me feeling inspired.

HRAFF organisers were so inundated with volunteers’ expressions of interest that they were in the unfortunate position of having to turn some of the 80 or 90 people away. It truly is a testament to HRAFF that they are able to command such enthusiasm and respect from members of the public. We can only hope that, as HRAFF grows, there will be more opportunities for everyone to take part.

You can read more about the artists and events that took place at Rhythm and Rights by visiting the HRAFF website here.