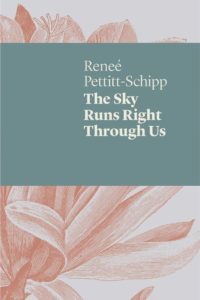 The Sky Runs Right Through Us

Reneé Pettitt-Schipp’s debut book of poetry The Sky Runs Right Through Us begins with a quote from beloved environmental activist, author and scholar Joanna Macy: “The heart that breaks open can contain the whole universe.” These words are a fitting touchstone for a collection that speaks to the importance of cultivating compassion in both political and personal domains and which reveals the poet’s careful attentiveness to the natural world and its creatures. For me, this wonderful collection created a sense of widening circles: of more and more people, situations, creatures, natural phenomena and places being brought into Pettitt-Schipp’s sphere of attention and empathy with each poem.

The collection is divided into four sections, each of which evokes a sense of place. The four sections, respectively, trace Pettitt-Schipp’s physical and emotional journeys to Christmas Island, where she works as an English as a Second Language teacher with asylum seekers in detention; back to mainland Australia, where she spends time with and cares for her dying father and tries to come to terms with his death; to the Cocos Islands, where she lives and teaches for a period of time; and back to the suburbs of Perth and beyond.

While the poems are varied in subject matter, there are some key themes and plots running through the collection. Most relevantly to Right Now readers, there are political poems bearing witness to the troubled history, living conditions and cumulative trauma and psychological strain of asylum seekers detained on or intercepted near Christmas Island and the Cocos Islands. Examples of these include “Me. You. Us” (19-20); “The Politics of Entry” (23); “The Haunting” (24); “First Flight” (40); “Boys with Wings” (41); “What Water Brings” (48) (published on Right Now in May 2018); and “Parting Glass” (25-26).

The latter poem provides a chilling, but beautifully written, account of the experience of an asylum seeker and friend of Pettitt-Schipp’s who attempted to take his own life while detained on Christmas Island: “lift the vessel high/to all you’ve ever known/close those eyes/to lovers and glances/music and dancers/beautiful hunger/shiver of sky.” In these poems, Pettitt-Schipp artfully hints at the way Australia attempts to separate and distance itself from the islands and the vulnerable and traumatised people it detains and intercepts on and near them.

Several other poems explore Pettitt-Schipp’s relationship with her ageing and ill father and the “journey of forgiveness”, empathy and healing they embark on together as his health deteriorates and he approaches death. Poems of this theme include “My Father Comes to the Island” (21-22); “Stepping Through” (29); “Slow-Dancing” (30); and “Measuring Loss” (31-32). These poems convey the emotional charge and urgency their relationship gains in proximity to the end, and the gentleness, tenderness and compassion with which Pettitt-Schipp cares for her father as he weakens and dies, despite his “difficult love”.

Another key thread uniting the poems is a deep attentiveness to and reverence for the natural world. Some poems will remind the reader of the poetry of Mary Oliver in their close and detailed attention to the daily activities of small creatures such as birds, lizards and insects, and indeed “Kings Park” (101) appears to include explicit references to Oliver’s poetry. Other pieces observe, with sadness, the reduction in biodiversity on the islands, including the absence of birds on the Cocos Islands where once they were abundant, making “these wild spaces echo/with loneliness” (“Echo”, 38).

Although small creatures and tiny details of the natural world certainly receive close attention, the grand Indian Ocean which flows between and unites all the places we visit in Pettitt-Schipp’s poems is the central focus of the nature poetry in the collection. As Radio National producer and presenter Mike Ladd explains in a quote on the second page of the book, “Reneé Pettitt-Schipp has had an interest in the artistic and poetic movement known as Tidalectics, an ocean-based movement that seeks a more decentralised, environmental and fluid approach to world poetry and politics.” Quintessential of good writing about nature and place, the sea has such shape, personality and presence that it is like a central character of the book.

Beautiful oceanic pieces such as “Pinggir” (36), which has lines translated into the Cocos Malay language, capture life spent observing and savouring the simple sensory pleasures of the ocean and the explosion of life it supports. “Pinggiran” (37) explores the interconnectedness between the ocean and all forms of life on the island: “life is tenuous/here on the merest/suggestion of soil/that contracts/expands/with the lagoon’s/slow exhalation/a rhythm we all/wait for/live by/har-hari ter gantung/days poised/on the rush of its breath”.

Indeed, the ocean is the stage on which much occurs in the poems. It washes objects up, exposes things, takes things away, and dictates the rhythms of the islands and their inhabitants, as well as providing an eerily beautiful backdrop to the more troubling aspects of life on the islands. Importantly, what is made clear throughout this collection is that the ocean waters move fluidly between the islands (that is, Christmas Island, the Cocos Islands, and the mainland), and connects them – no matter what attempts are made at insularity and division.