For those who’ve come across the seas

If you don’t immediately recognise those words, it’s because they’re from the second verse of the Australian anthem. You know, the verse that no one knows the words to.

But someone who did know them, and who recognised the poignancy of the lyrics given our current political climate is Adelaide based street artist Peter Drew. With a Masters Degree in Research from the Glasgow School of Art, his work can be seen in Adelaide, Berlin, Glasgow, London, Melbourne, New York and Sydney.

Drew’s most recent project, Real Australians Say Welcome, draws on the lyrics of the Australian anthem, challenging viewers to re-think contemporary discourse surrounding asylum seekers. As an artist, Drew is intrigued by an irony and hypocrisy now associated with a nation whose European history and settlement was forged by those who crossed the seas in search of a better life and are now denying this right to many seeking similar refuge.

No stranger to controversy, Drew’s previous work Bound For South Australia from 2014, addressed similar themes and issues. In conversations and correspondence with refugees both in detention and released on temporary visas, Drew urged these asylum seekers to share their stories and memories through words and imagery. Drew then enlarged the resulting stories and drawings into posters and pasted them around the Adelaide CBD. Several of these were taken down in a matter of days by business and council, but others remain intact. Twelve months later these stories are still being told. 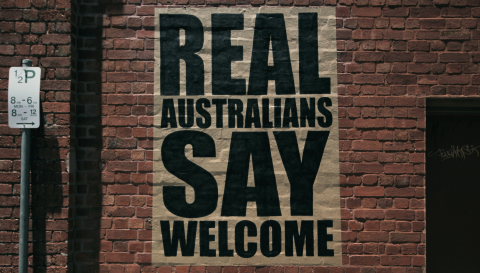 With Drew’s most recent project, Real Australians Say Welcome, he aims to produce and install 1,000 of his latest posters nationwide across Australia in all eight capital cities. Drew is currently running a Pozible campaign to help fund this project.

While it is clear that this project focuses on the plight and negative perceptions of asylum seekers, Drew ultimately aims for the viewer to look inward and consider broader notions of the Australian identity. Indeed, the wording of his posters are intended to raise questions and introspection. Who are the “Real Australians”? Are they only the descendants of the nation’s first European settlers? What about those post-war European generations? Or the descendants of Chinese miners from the 1860s and those families whose parents came here on the Colombo plan? What about our Indigenous Australians? Those who’ve suffered most brutally at the arrival of “the boats”, are they the only “Real Australians”?

Drew’s work channels the folklore and legends of “Australiana”. It alludes to the qualities and values celebrated in our poetry, prose and art as “true blue” Australian: generosity, warmth, bravery, mateship and a “fair go”. Why, Drew asks, if these qualities are so intrinsically “Australian” can we not, as a nation, apply them to our treatment of refugees? Why as our national Anthem states can we not, with courage, combine and advance Australia fair?

For a project that has its beginnings in South Australia, it is interesting to draw connections with the story of Hieu Van Le, South Australia’s Governor and former Vietnamese refugee. Mr Le and his partner, Lan, fled war-torn Vietnam by boat 38 years ago. As Mr Le recalled during an interview with the ABC:

“Out of this curtain of mist we saw the little tinnie coming toward us, quite fast, and there were two blokes standing in it, shorts and singlets, sunhats on, white zinc cream on their noses, the fishing rod sticking up into the sky. They waved at us and they came very close, very close and very fast to our boat and one of them raises the stubbie up as if proposing a toast. ‘G’day, mate!’ he shouted. ‘Welcome to Australia.’”

Mr Le’s experience is indicative of how Australians’ attitudes regarding refugees have changed over the years as a result of fear-mongering and divisive politics. Drew’s artwork is a reminder of our nation’s past and of our capacity to live up to the ideals and standards that supposedly typify the Australian character.

Against the tidal wave of negative media and the “stop the boats” rhetoric that surrounds the asylum seeker debate, Drew’s work sends a message that all Australians need to hear.

For more information or to donate to Drew’s Pozible campaign click here. Drew will also be documenting his journey through videos, which can be viewed on his website.