“This is a great Australian fear, one that never really goes away: the fear of being overrun by dusky fleets sailing down from the north.” 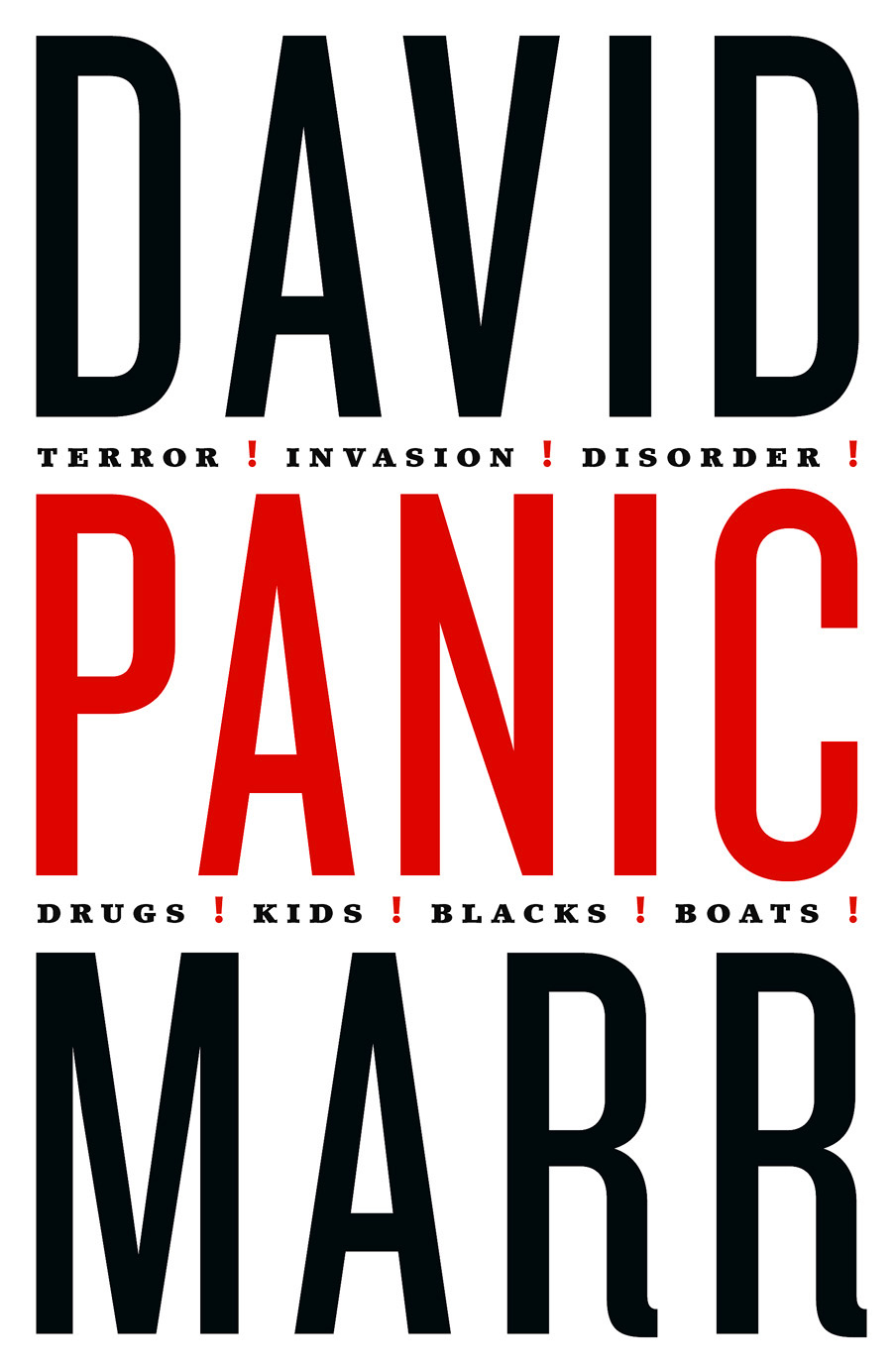 Journalist David Marr chooses to kick-start and end his book, Panic, with reference to the greatest moral panic to plague Australia in recent times – ‘boat people’. And although he goes on to detail many other such instances where pragmatism and compassion have given way to fear and panic – from the rise of Pauline Hanson’s One Nation, the hysteria surrounding drug legalisation and the Cronulla riots to draconian anti-terrorism laws, homosexuality and the infamous Bill Henson scandal – it is the collective abuse of asylum seekers’ rights, sanctioned by both the public and government, that emerges as the most shocking and incomprehensible moral dilemma of our time.

Through a series of vignettes written between 1997 and 2013, Marr chronicles the various instances in Australian social and political etymology where politicians, shock jocks and journalists have coalesced to whip up a frenzy of fear and loathing – largely related to race, but not exclusively. Armed with an impeccable eye for detail, a cruelly sardonic sense of humour, and years of illuminating conversations gleaned from prized audiences with important Australian political figures and in influential newsrooms, Marr expertly traces the roots of the various states of false alarm that have characterised Australia.

“Perhaps what gives Australian politics its flavour is the willingness of both Labor and the Coalition to indulge fears they haven’t the courage or the will to contest.”

It’s apt that Marr’s first exposition traces the beginnings of the infamous Pauline Hanson. At his best when setting the scene crucial to exposing the personality behind the politics, Marr’s description of Hanson, with a ‘voice as uncomfortable in the flesh as it is on television’ and ‘steely frailty’, give readers insight into an inexplicable character usually seen from afar.

Similarly, Marr excels when divulging the elaborate political schemes that lay behind the unlawful capture of several young anti-war protestors, the interrogation that precipitated the unwarranted arrest of suspected terrorist Muhamed Haneef, and the explosion of the ill-fated boat SIEV 36. As Marr adroitly fosters a sense of tension to create a compelling sense of immediacy and action, it is easy to forget one is listening to a retelling of events they already know about.

The untold story behind Bill Henson’s censorship scandal, when his images of nude children become one of the most contentious political events of 2008, stands out from the rest. That an exhibition that was explicitly approved by the two classification boards of Australia could provoke a national debate on censorship was an incredibly telling testament of the power of radio, television and newspapers in shaping public opinion. Marr refrains from moralising the nude pictures, and remains largely circumspect (as in the quote below), but maintains that the tabloid beat-up exploited an underlying fear in society of the excesses of art, film, television and more recently, the internet:

“The Henson invitation has few friends. I have yet to meet anyone who says they opened the envelope with wholehearted pleasure.”

Shock jock Alan Jones – sarcastically dubbed ‘that monster of rectitude’ – features aplenty. From the cash for comment scandal that engulfed him to his fanning of widespread hatred that indisputably aided the Cronulla riots, Marr is scathing and unforgiving when describing one of the greatest ‘panic merchants’ of the decade.

“[Howard] was a leader unafraid to use race for political advantage. The most fearful Australians were his people and he was one of them.”

With refreshing candour, the left-leaning Marr is as scathing on Labor as he is on the Liberals and holds each party accountable for the current panicked state of fear Australia finds itself in. He outlines Labor’s complicity in many of the human rights infringements, insidious racism and cowardly back-pedalling that has characterised the national debate, and credits Paul Keating’s Labor government with an appallingly poor decision that set the current mandatory detention of refugees into motion – a law that has since incarcerated all boat people until they are either granted a visa or thrown out of the country.

He notes: “Perhaps what gives Australian politics its flavour is the willingness of both Labor and the Coalition to indulge fears they haven’t the courage or the will to contest.”

And though he concedes that Rudd’s political mandate was always to “skate through, rather than address important issues”, and calls the courts out for giving its “seal of approval to the cruel and unusual measures Australia put in place to punish and deter refugees”, his unbridled rancour is reserved for John Howard and the intractable damage he and his minister for immigration, Philip Ruddock, unleashed with their “deliberate, outrageous and effective” crackdown on refugees.

“He was a leader unafraid to use race for political advantage. The most fearful Australians were his people and he was one of them,” Marr says of Howard.

Marr’s framework for a more empathetic and reasonable Australia lies in a two-pronged solution – dealing with race and confronting the churches – and perhaps a bill of rights. But the prognosis isn’t a positive one; especially as Marr closes Panic with how Australia’s newly elected Prime Minister, Tony Abbott is harking back to the days of Howard in dealing with the most highly politicised quandary of our time – boat people:

“He is riding panic to power. For those who drown on the way he claims infinite compassion. But the politics are driven by those who arrive.”