“I don’t read fiction,” said a woman in the bookshop. She lifted a novel from the shelf, scanned the blurb and put it back. “I read to learn things.”

“I know what you mean,” said her companion. They moved on and left me browsing the fiction, as they headed for the travel and cook books.

It’s an opinion I’ve heard before – that non-fiction teaches us stuff, whereas fiction does not. For people who subscribe to this opinion, I would urge them to read a novel the calibre of A. S. Patrić’s Black Rock White City.

This is a book that illustrates the power of good fiction; its ability to enlarge our understanding of the world by plunging us into the lives of other people in an intense and, in this case, often troubling fashion.

At the centre of the book are Jovan and Suzana, a couple who came from Yugoslavia – “when that was still a country” – to Australia as refugees.

In Sarajevo, Jovan was a poet. In Australia, he works at a hospital where he cleans toilets and floors stained with blood. And, then, graffiti. 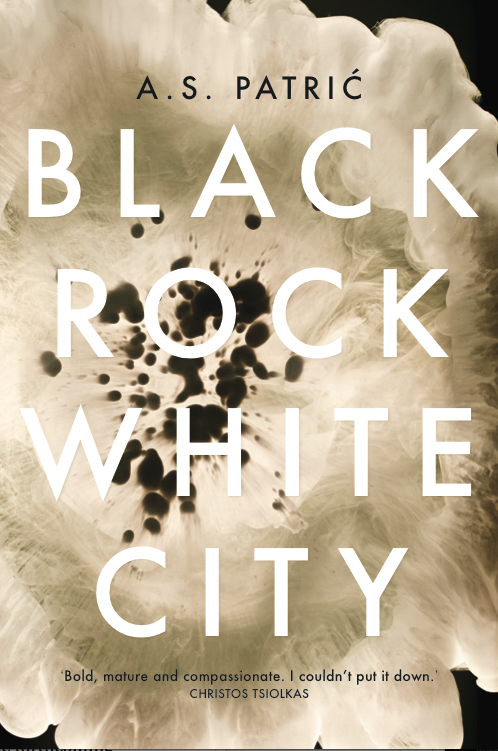 The novel opens with Jovan removing words that appeared overnight on the hospital’s X-ray machines: The / Trojan / Flea. The graffiti quickly escalates. A body is discovered on a hospital trolley, the flesh cut with a scalpel. From throat to navel, someone has carved the word: Inspiration.

The mystery of the graffiti – Who did it? Will they get caught? – provides the framework for the novel. Yet the real mystery in the book lies deeper; it is to do with how people can survive horrific traumas and, somehow, still go on.

As the book progresses, we learn more of Jovan and Suzana’s past, and of the terrible, human impact signified by an ordinary word like War. A word that, for the characters, signifies the destruction of “God and the skies, the past and the future”.

Jovan and Suzana have lost their former lives: their family, their language, their home. The only rational response to these losses, the book suggests, is suicide. But in order to survive, they have to find new ways of being in, and understanding, the world.

For Jovan, this involves shedding his identity as a poet. In Australia, Jovan focuses on manual work, driving an old van that smells of turpentine, paint, motor oil. To Suzana’s embarrassment, he refuses to speak English properly, though she’s sure he knows how. This new Jovan “doesn’t write anymore, and it’s as if he never did”. Everything that he was serious about, all his work, has been left behind with his local tongue.

There is a hardness to Suzana, a refusal to play the accommodating role of the refugee.

The appearance of the hospital graffiti underscores, for Jovan, the capacity of language to be a dangerous, destructive thing. The graffiti affects members of the hospital staff in dark and even violent ways. Jovan yearns for “life to go back to the way it was”, before the graffiti. The simplicity of cleaning blood from a birthing room, rather than words.

While Jovan tries to abandon language, Suzana seeks refuge in it. She falls in love with English, and collects curious spellings and odd turns of phrase in her Moleskine notebook. She is attuned to the idiosyncrasies of the language in the way that a native speaker is not. Soon, collecting phrases is not enough, and she starts to write a novel set during the height of the Ottoman Empire.

While Jovan may be the protagonist of Black Rock White City, Suzana is by no means in his shadow. There is a hardness to Suzana, a refusal to play the accommodating role of the refugee. Her acerbic comments can be enough to “murder the smile” on someone’s face. When she checks into a hotel the clerk tells her she has an interesting accent. Suzana’s response:

Thank you, if ‘interesting’ is a compliment. If not, keep quiet. You might avoid insulting your guests.

This outer toughness is also something she cultivates within. When, in their former life, Jovan nearly died in a refugee camp, Suzana walked to the tent where he lay with one word in her mind: passable. She reiterated to herself the fact that Jovan was “a passable husband, a moderately talented poet, who would never stir revolution in the blood of anyone”.

Yet this hardness is, at least in part, a coping mechanism. The reader is given to understand that within Suzana, “some white substance fills her soul”. It is a capacity for love and generosity that has not been destroyed, even after everything she has gone through.

Suzana is, without a doubt, one of the most complex female characters I’ve come across in recent literature. While it would have been tempting to simply make her a ‘likeable’ female character, Patrić does not do this. He offers us something far better instead; a memorable character who challenges us and endures in the imagination.

Ultimately, this is a book that humanises pain and trauma. We see Jovan and Suzana as individuals, not as casualties of war. In this way, the book opens up “new ways of feeling, seeing, understanding and being”. Just as all good fiction does.

Shares
Comments Off on Of language, love and loss

Magdalena McGuire is a writer and researcher based in Melbourne.