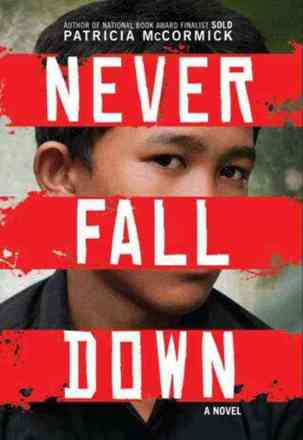 When the Khmer Rouge seized power in 1975, millions of Cambodian men, women and children were forced into the countryside where, if they survived starvation, disease and the brutality of the Comrades, they were forced to tend the rice fields day and night.

Patricia McCormick’s Never Fall Down recounts the story of real-life Khmer Rouge survivor, Arn Chorn-Pond. He was just 11 years old when he was separated from his family and confronted with the unimaginable atrocities that formed part of everyday life under the regime.

From the beginning, Arn is a typical 11 year-old. He plays soccer in the streets and recreates battle scenes from movies that he and his brother watch. When the violence he has seen in the movies turns upon him and he becomes the object of the regime’s attempt to distort, coerce and terrorise, he responds as any child would: with natural credulity and heartbreaking obliviousness.

However, Arn quickly discovers how he must act. To avoid being added to the growing pile of dirt in the mango grove, he must feign love for the leader and appear unaffected by the constant stench of blood in the air. “You show you care, you die. You show fear, you die. You show nothing, maybe you live” he tells himself.

Told through a series of vignettes in the fictionalised voice of a young Arn, McCormick’s greatest achievement is the undying sense of humanity that she captures in Arn, even when he is coerced into committing the most inhumane deeds.  Although his ability to play music for the guards initially saves him, it is quickly stripped of any uplifting qualities when he discovers that the music serves only to cover the sound of killing in the nearby fields. Nevertheless, he manages to find some redemption in his music as he sneaks out at night to play to a guard he has befriended. “These night I can lose myself in the music because I don’t sing the word.” He says.  “No blood red field, no glory to the Angka, only notes. No hate in notes; notes just notes. All the hate is in the word.”

Importantly, even in a book for young readers, McCormick does not shy away from the gruesome reality of life under the Khmer Rouge.

Although McCormick manages to portray Arn with a stirring sense of determination to survive and to be reunited with his family, the decision to write the voice of Arn with the simple, broken English of a child is somewhat odd. Given that Arn himself speaks with eloquence and relative fluency, this technique at times detracts from Arn’s experiences and diminishes the significance of his story.

As a novel aimed at young adults, however, one has to praise McCormick for presenting with such clarity, emotion and simplicity the history of a country that is too often left unspoken. In 2002 the Cambodian government ordered history of the genocide to be removed from all school curriculum and only recently have the amnesties granted to the Khmer Rouge leaders in 1994 been overturned so that the architects of the genocide can face trial.

Importantly, even in a book for young readers, McCormick does not shy away from the gruesome reality of life under the Khmer Rouge. It is there in all its hideous cruelty. Neither are the details of Arn’s life fictionalised more than was necessary. In the Author’s Note she explains; “I chose to see his recollections as the armature onto which I could craft a narrative…the truth, I believe, is right there between the lines”.  And the truth of Arn’s story is not easy to hear.

Even after escaping the Khmer Rouge to an adoptive family in the United States, Arn continues to struggle with the trauma of having lived as a child soldier. Nightmares, unfamiliarity with his new environment and continual re-living of the past continue to plague Arn. Only at the very end of the novel does he experience a moment that hints at possible reprieve as he delivers a talk recounting his ordeal to an American audience in what turns out to be clearly a cathartic moment for Arn.

But it is this raw exploration of the horrors of the regime that makes this such an important novel. Just as story telling was important for Arn’s personal recovery, so too is the telling of stories about the genocide vitally important to Cambodia’s national memory and the history of human rights abuses more generally.

Shares
Comments Off on Never Fall Down – Mid-Week Review