The Mind of the Islamic State
Robert Manne
Black Inc. 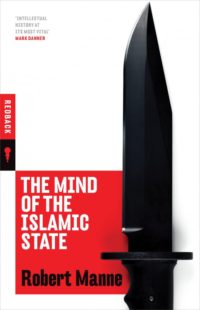 In The Mind of the Islamic State, Robert Manne traces the intellectual and political origins of Salafi jihadism, the radical ideology of the Islamic State. From the prison writings of Egyptian Muslim Brother Sayyid Qutb to explorations of al-Qaeda, various Islamic scholars, and revolutionary jihadist al-Zarqawi, Manne narrates the journey of a worldview progressively radicalised, until it arrived at its current form of unprecedented brutality and near undiscerning violence.

Manne effortlessly recounts decades of Salafi jihadist thought, beginning with Qutb’s seminal text, Milestones. Published in 1964, Milestones introduced the central, polarising concept of jahiliyya to a generation of radical revolutionaries in Egypt and beyond. Qutb argued that the whole world had fallen into jahili – a state of pre-Islamic, spiritual darkness – which only total submission to sharia and the Oneness of God could rectify.

Although Qutb’s interpretation of jahiliyya influenced almost all subsequent Salafi jihadist thought, he was relatively averse to indiscriminate violence and extremely ambiguous about how to rectify the global state of jahiliyya. By the time al-Qaeda carried out the 2001 attacks on the Twin Towers and Pentagon, there was still no clear political plan other than terrorising the “Judeo-Christian Crusaders”. By this stage, however, the importance of martyrdom operations and the killing of innocent civilians had been justified through ever more radical Islamic jurisprudence, which even justified the slaughter of women and children – something explicitly forbidden in the Quran according to the vast majority of interpretations.

It wasn’t until Abu Bakr Naji wrote The Management of Savagery in 2004 that a blueprint begun to emerge. According to this influential publication, the mujahideen should engage in “vexation and exhaustion” operations where central power was weak in order to create “regions of savage chaos”, thus creating an environment where the stability of an Islamic state would be craved. This strategy, often cited by the Islamic State and further compounded by the influential mujahideen leader al-Zarqawi’s ruthless hatred and distrust of Shi’a Muslims is how we arrived at the chaotically violent extremism of the Islamic State today.

A central point in Manne’s book is that the unwavering ruthlessness and forthright violence of the Islamic State’s tactics and ideology is utterly unprecedented, both in relation to the 20th century’s worst murderous regimes and some of the most radical Islamic jurisprudence to come before it. In Dabiq, the Islamic State’s propaganda magazine, crimes of little tangible connection to the terrorist organisation, such as the Sydney siege and other ‘lone wolf’ attackers, as well as the mass killing of innocent civilians and Shi’a Muslims – something that even al-Qaeda’s al-Zawahiri refused to endorse – are praised and recanted in gruesome detail. Unlike Hitler, Stalin, and Pol Pot’s clandestine systems of murder and incarceration, when it comes to the Islamic State, “the killing fields are on proud display”.

As Manne puts it, “there are no milestones left to pass. We have finally arrived at the gates of Hell”.

Given the degree of misinformation regarding Islamic thought in Australian public debate, this book provides an accessible and vital account of how such an extreme ideology could come to be justified – through great jurisprudential detours and numerous political fallouts – in the name of a religion that broadly teaches peace and acceptance.

Where the likes of Pauline Hanson and her One Nation party senselessly declare Islam a “totalitarian political system” which “demands that all Muslims work to overthrow all nations, governments and non-sharia laws”, clearly more education on the true and complex origins of Salafi jihadism and its divergence from the vast majority of Muslim thought and practice is desperately needed.

Shares
Comments Off on The Mind of the Islamic State

The Mind of the Islamic State is now available from Black Inc.