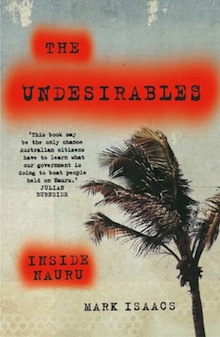 It is testament to just how low Australia has sunk in its treatment of asylum seekers that every time I review a book dissecting the issue, a fresh crime against their rights has been committed.

Just last week, two vessels were intercepted by the government, one with 41 Sri Lankan asylum seekers being handed back to Sri Lankan authorities, despite them being “very concerned they would be handed over to their torturers”. It has now emerged that Sri Lanka plans to charge the returned asylum seekers.

In Mark Isaacs’ explosive new book The Undesirables, further details of the gross negligence, corruption and mismanagement by government and officials emerge. Tellingly, the title was inspired by a term staffers for Immigration Minister in the Gillard Government, Chris Bowen, coined for asylum seekers upon their visit to Nauru. Reading like a whistleblower’s account of what took place behind the walls of the all-male Nauru Regional Processing Centre during his visit, The Undesirables is a tough but crucial expose on the human reality of Australia’s Pacific Solution.

“What was there to wake up for? Another day in the camp with no answers.”

The process of Isaacs, then 24, gaining permission to visit Nauru as a Salvation Army employee itself underlines the inefficacies of the bureaucracy. After a brief phone call, he is dispatched to Nauru within a week — despite no formal interview or assessment procedure, not knowing any of the languages spoken by the asylum seekers and without prior experience as social worker (Isaacs spoke recently to Fairfax Media about the process).

But it is fortuitous that he was. Throughout five rotations – each lasting up to several weeks – Isaacs becomes intimately acquainted with the plight of the various men: Iranians, Iraqis, Kurdish, Hazaras, Pashtuns, Tamils, Sinhalese.

“When I watched the care they put into their appearance I realised it was a way of maintaining their humanity. When all else was being taken away from them, they still had the dignity to care for their appearance.”

In turn, Isaac humanises many of the asylum seekers and attaches faces to names to people otherwise only referred to by registration numbers. He details the ethnic tension among the men – “divided by the desperation of camp life” instead of being bound together by the commonality of their situation – the dehumanising aspects of institutionalisation, the rebukes they face from family back home and the desperate hunger strikes, as well as self-imposed heat strokes the men resort to in their helplessness. The depictions of self-imposed violence among the despairing men are never superfluous, and as a result, the reader never becomes desensitised to the various instances of pain and suffering portrayed.

… it is impossible to treat the men for trauma and torture because they  “were constantly being retraumatised” by the very facility they were in.

Throughout, Isaacs is an objective but far from a dispassionate observer – his musings and reflections are interlaced with outpourings of emotion and compassion towards the plight of men that he works with. He interacts with many men in his five stints at Nauru, and it can be hard to keep track of each of their individual fates. But some can simply not be forgotten. Parshan, who runs around the camp to help the fat guards who oversee him lose weight, eventually breaks down. Namdar goes on a 50-day hunger strike, only to be taken to Australia for medical treatment then returned to Nauru. Ali, a highly revered religious leader in the camp, descends into a psychotic episode that causes him to be forcibly removed from the camp. Little Reza who takes English lessons with Isaacs overdoses on a mix of antidepressants, sleeping pills, mosquito repellents and cleaning products.

His writing is evocative, bringing to life the unabated physical, emotional and mental hopelessness thousands of men have been subjected to.

“Each man had demons to face. The nightmares of the past. The hopelessness of the future. The inertia of the present. What was there to wake up for? Another day in the camp with no answers.”

On another level, Isaacs exposes the dirty politics adopted by various service providers in the camp, the contradictory instructions of Salvos management, the draconian rules adopted in the centre, and the fear-mongering of governmental agencies such as ASIO.

The biggest problem with the offshore processing of refugees is not the fact that it is offshore, according to Julian Burnside in his prologue, but that it is not in a safe place, it is not fair and efficient, and most of all – it is not swift. Despite the fact that mandatory detention was initially conceived by Paul Keating up to a maximum of 48 hours, asylum seekers now face waits of up to five years in decrepit surroundings perpetuated by mental illnesses, tough living conditions, overly strict management, a lack of legal representation, and a lack of freedom normally reserved for criminals.

“Criminals were given a sentence to serve; these men were not even given that. Lost hope ebbed out of the men in uncontrollable sobs and tears.”

Isaacs reveals other problematic aspects of the offshore processing centre in Nauru – from the “Australian pillaging of Nauruan land” that dates back to environmental damage Australia phosphate mining operations caused, to the astronomical amounts of taxpayers’ money being spent to fly asylum seekers to the mainland for medical treatments on ailments suffering in detention. Not only is the policy inhumane for both Nauruans and asylum seekers, it is not economically viable.

But perhaps the biggest problem with the indefinite mandatory detention in Nauru how it is impossible to treat the men for trauma and torture because they “were constantly being retraumatised” by the very facility they were in. Regardless of what side of politics one is on, Isaacs’ book forces readers to see that there is no argument that justifies the cruelty accorded to these asylum seekers.

“My gut feeling after having experienced Nauru was that the Pacific Solution was a cruel and unjust policy that punished innocent people based on an unfounded fear that they were a threat to our way of life.”

In a time where much of the news of what asylum seekers undergo does not reach the Australian public and the visa application fee to visit Nauru is a non-refundable $8,000 even if access is refused, Isaacs’ book is incredibly important and powerful. Every Australian should know what these men have gone through, what atrocities are being carried out under the banner of the Australian flag, and what needs to be done to stop it from happening so these men are not consigned to the “non-people” they are in the danger of becoming.

As Isaacs recounts: “I was shocked that such misery could exist in my country – misery that I’d never known about; misery caused by a system we created.”

Not in our name.

Shares
Comments Off on Exposing the true “undesirables” in Australian immigration