What is Veiling? | Edinburgh University Press 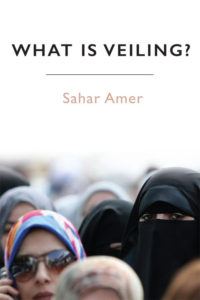 In the past month Australia has appeared preoccupied with “the veil”. The burqa, the niqab and the hijab have been catapulted somewhat unkindly into mainstream media due to misinformed political opinions, fear of the unknown or the ‘other’, and general misinformation about the role that it has in Muslim culture, society and religion.

Given the current environment in Australia and arguably the Western World, Sahar Amer, Professor and Chair of the Department of Arabic and Islamic Studies at the University of Sydney, is well placed to write a book on Islamic veiling that will introduce readers to the history and complex socio-cultural practices surrounding it in an accessible, easy to read way.

What is Veiling? is a fascinating read that traces the history of the veil from urban Mesopotamia to discussion of hijab references and it’s meaning in the Qur’an, to Islamic fashion and everything in between. When Amer talks of veiling, it means everything from the burqa to the Oman burgu (metal face veil), the leather lithma from the Gulf region and the Senegalese moussor’s (headscarf). Veiling is a diverse practice that attracts many opinions and the book aims to deepen the reader’s understanding of it through a careful exploration of the past as well as analysing contemporary practices and attitudes – from Muslims and non-Muslims alike.

Divided into three parts, the book not only explores Muslim attitudes to the veil, but also critiques Western approaches such as the popularity of Orientalist imagery that helped define an image of the stereotypical Middle Eastern woman of the nineteenth century – the medium changing to film once the power of Hollywood became evident. In fact, Amer points out that “Only since the nineteenth century has it been an integral part of Euro-American discourses on Islam and the Middle East”.

Indeed, she notes that negative attitudes to veiling in Europe have resulted in the banning or restriction of the burqa or niqab in numerous countries such as France with threat of imprisonment or fines of upwards of $38,000 or Belgium where it is banned from all public spaces. Such vehement opposition to a practice that has, as Amer points out, roots in traditions other than just Islam is worrying and indeed frightening. She also looks at veiling practices in the United States from a civil liberties or human rights perspective noting, in particular, the battle between the notion of freedom and the constitutional protection afforded to citizens under the First Amendment to issues of national security and distrust arising from 9/11 onwards.

The last part of the book is devoted to veiling and women, touching upon themes such as the early feminist movement in Egypt in the 1920s to stand-up comedy like The Hijabi Monologues which tried to move past audience fixation on the hijab to focus it on the woman underneath and their personal stories. Amer is also careful to include the fine arts and visual representation of veiling from Muslim artists challenging orientalist representations of themselves. The book presents both sides of the coin – women who veil and women who do not – so as to present a holistic picture of the complexities surrounding the practice.

What is Veiling? is an excellent resource that provides the reader with a great foundation on which to explore issues surrounding veiling – it is accessible, contemporary and provides recent examples about the practice, which is essential if one is to come to an understanding how veiling fits into the modern world.