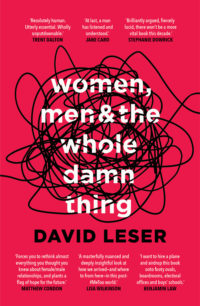 In February 2018, David Leser published an article in the Good Weekend on the #MeToo movement, titled “Women, men & the whole damn thing.” The piece struck a nerve and elicited a profound public response, with hundreds of messages pouring in around the globe.

What has resulted, a year and a half later, is an incredible work of non-fiction that spans from the pre-agricultural era to the age of social media, from the slums of India to behind the closed doors of Hollywood’s most revered titans.

I was hesitant, going in to reading Leser’s book, about how much a male could really have to say about a movement that began for, by and on behalf of women. Was it really the place of a white, cis male to write about #MeToo? Shouldn’t men simply be listening? And yet, from the first pages, Leser was quick to quell my fears.

“My intention in writing this book,” Leser prefaces, “was never, and is not, to speak for women about their mistreatment, or to claim to understand – as women understand only too well – how male contempt expresses itself across all walks of life. It is, rather, an attempt to investigate as a writer and a man how murderous male hatred rages across the world against billions of women and girls, of all colours, creeds, classes and ages.”

As I worked my way deeper into the book, it became increasingly clear that for the #MeToo movement to really succeed, we desperately need books like Leser’s, books that probe the male condition and self-interrogate, often self-deprecate. Books which urge men to become part of the global movement for change.

A central question underpinning Women, men & the whole damn thing is what leads men to inflict violent and abusive behaviour, against women and against each other. How did we get to this place? Or was it always this way?

Leser, throughout the book, takes pains to avoid dislocating his own self from the actions of abusive men, despite the fact he would never hurt or harass a woman. Unlike the “not all men” brigade, Leser empathetically understands that he too is implicated in a system that has systematically reinforced patriarchal identities and dangerous views about women.

“Women have been pissed off for centuries,” Leser writes, “and for a lot of men this is hard to hear. Hard to hear the brutal truths about male violence, hard to think about the nature of men, particularly if you believe you’re one of the good guys, or one of those men who feel undermined by economic and political forces beyond your control.”

Yet how are we to move forward until men begin investigating their own psyches? Begin calling out one another? Become open to hearing about the pain and suffering of women, instead of finding feminists loud, brash or annoying or, worse, calling women liars?

And here, this is not all men, but women, too, policing themselves and one another. Right now, Pauline Hanson is launching an inquest into family court on behalf of the government, on the back of strong statements suggesting women make up domestic violence claims in custody battles.

How far are we, still, from systemic change, when former NSW opposition leader Luke Foley threatened to sue a young political reporter – who explicitly hadn’t wished to get involved, for sexual allegations against him, or when Eryn Jean Norvill’s life was upended when – again – against her will, she found herself hounded by the media for private sexual allegations against the highly revered Geoffrey Rush. Is it no wonder women were, and still are, unwilling to come forward?

Leser interrogates this, yet also explores the complexities that followed the initial #MeToo tidal wave, when the dust began to settle. When, for instance, does clumsiness constitute harassment? And what about a pass at a colleague after work?

“Was that just poor training,” Leser asks, “or bad intentions, or was this how couples often came together, through some combination of risk-taking and bumbling awkwardness?”

The #MeToo movement is full of stories of horror – the Weinstein case of clear cut systemic abuse and exploitation of women over long periods. Yet Leser also rightly muses over the grey area stories that continue to trickle in, such as that of Aziz Ansari’s, which present no clear answers.

At the root of Leser’s book are several key questions; how do we form consensual, meaningful relationships in this increasingly complicated age? And how do we change society when the most obvious realities go undetected?

Those with power, Leser writes, are often blind to those who lack it. This is what #MeToo sought to undo. And this how powerful books like Leser’s will continue to transform our understanding of ourselves, and of each other.

Shares
Comments Off on Women, Men & the Whole Damn Thing: a review