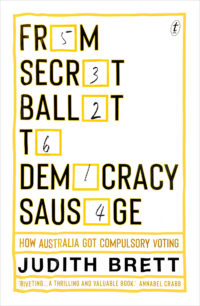 Shares
Comments Off on From Secret Ballot to Democracy Sausage: a review