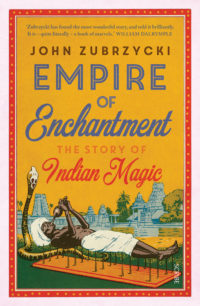 Empire of Enchantment: The Story of Indian Magic

On the surface, John Zubrzycki’s Empire of Enchantment: The Story of Indian Magic is just that: a story of magic. Painstakingly researched and beautifully pieced together, it presents to the reader the glorious history of a culture that embraced and revelled in the beauty of illusion. However, just underneath that surface, there are darker ideas lurking, ideas that continue to hold the country in their grasp even today.

Growing up in India, I saw firsthand the “street-magicians” this book speaks of. What I did not see was the “magic” in their acts, in fact I can’t even say I ever really allowed myself to watch. We had been raised to fear such performers, those who completed feats which seemed unreal, frightening, exhilarating. The reason, of course, was that they were considered to be beggars, an association which automatically negated the skill involved in their acts.

How strange that magic is so often a synonym for ignorance or blind superstition in a country whose oldest literatures detail events that still push the limits of human imagination centuries later. Then there are the street magicians themselves, the “jadoogars” both past and present that this book seeks to chronicle. Little children twisting themselves into pretzel-like shapes on top of inch-wide rods, monkeys with tikas on their foreheads and a leash around their necks, men and women with hair browned due to a lack of nutrition and constant exposure to the sun – this is how most Indians see the “jadoogars” this book speaks of. Admittedly, “see” is a fairly strong term, for most Indians don’t see “jadoogars” at all – they ignore them.

Zubrzycki is absolutely right, the reason why much of India’s magic is ignored is because of the public’s complacency. We neither appreciate nor acknowledge the spectacular feats that are performed under our very noses, or rather the corner of our eyes, every single day. The unfortunate thing is that much of that association is the legacy left to us by the country’s colonial past.

On the surface, this book may seem like a mere history of magic, curving its way through ancient texts from the Rigveda and Ramayana to the Arthashastra, pointing out the mysterious riddles that have been associated with India for generations. Much of this magic in India’s history is interwoven with religion, and the author takes care to explain these connections, showing the reader just how intricate and detailed the depictions in each text were. Needless to say, had Zubrzycki lived in 1835 when Macaulay made his infamous declaration that “a single-shelf of a good European library was worth the whole native literature of India and Arabia”, the history of Macaulay’s Minute might have been very different. From Bhoja’s descriptions of “vimanas” (flying contraptions), and “yantras” (automaton that performed the services of soldiers), it’s clear that the richness of imagination in India was intriguing, one might even call it magical.

The whitewashing of India stretched to more than its magical roots, it infiltrated the society, the mentality, the belief-system inherent in the nation.

Zubrzycki (and much of the world’s scholars agree) believes that it is improbable that these contraptions existed. Yet the very mind required to dream them, in a world where basic technology like electricity was unheard of, is astounding. No doubt it would have made the likes of Asimov and Wells quaver in their boots. Yet, when the time came to protect its own literatures and depictions in it, the country seems to have dropped the ball. The reason, for this is possibly no different from the reason behind many Western magicians dismissing Indian magicians back in the 1800s. In other words, “No matter how crafty and audacious the jadoogar’s feats, the modern Western illusionist was always going to be superior”.

Unsurprisingly, then, what started off as wonder at the abilities of these performers soon morphed into a way to dismiss them. The Western magicians deftly picked up what illusions they could and sailed them back home, selling them under the banner of “Eastern” miracles of sorcery, while at the same time looking down their nose at the “jadoogars” in their own environment, leading these “jadoogars” to internalise a feeling of inferiority. Possibly to elevate themselves, the Indian magicians then began to adopt Western practices, which only led to more disappointment. For instance, Thurston,  often said to be the one of the greatest magicians of the era, stated that more and more Eastern magicians were introducing European techniques into their acts.

It’s unfortunate how true this holds even today. The whitewashing of India stretched to more than its magical roots, it infiltrated the society, the mentality, the belief-system inherent in the nation. To date, all things English and Western are admired by much of Indian society. And who should we blame at this stage? The colonisers who recognised the power of our magic and thought it better to snuff it out, or ourselves for refusing to recognise the power in the first place?

Shares
Comments Off on Magic and Society: Zubrzycki’s Empire of Enchantment