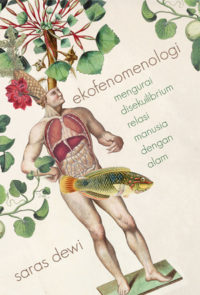 Ecophenomenology: Unravelling the Disequilibrium of Human Relations with Nature

In one of Doraemon anime’s episodes, Nobita and Doraemon – the two main characters of the celebrated Japanese cartoon – were fighting against a team of property developers who planned to build a golf resort and a shopping centre on their favourite hill. This hill was located near their residential area, on which stood old trees whose age exceeded the age of population of the city. Nobita and Doraemon decided to save the hill using advanced tools from Doraemon, a robotic cat that comes from the future. They managed to prevent the trees from being cut down and drive the businessmen and developer away from the hill. As a result, the project was cancelled. In other stories in the cartoon series, Nobita often uses Doraemon’s tools to fulfil his silly desires and benefit himself. But in this episode, he chooses to use the tools for a greater good. This episode shows human alignment to nature using technology.

The story is presented in Ekofenomenologi: Mengurai Disekuilibrium Relasi Manusia dengan Alam [Ecophenomenology: Unravelling the Disequilibrium of Human Relations with Nature], which offers another perspective in understanding nature, including criticism of the use of technology for humans. Through this book, Saras Dewi offers a middle course to explore the disequilibrium of human relations with nature. Disequilibrium is the imbalance that occurs as the consequence of human’s exploitation of nature, marked by the loss of biodiversity, global warming, and so forth.

Various methods have been taken to understand the deteriorating natural conditions and prolonged damage. A body of work on theories and ethics has been developed but remains insufficient to dissect and untangle the root of natural damage problems. Therefore, a deeper understanding of nature is needed. With regard to this philosophy comes to stage as a discipline of thought aiming to radicalise the problems, facilitate the steps to find a solution to end the natural damage.

This book offers philosophical views in understanding human relations with nature. It promotes a more extended look of ontology: human relations with nature as an equilibrium. The author points out the dichotomy between “anthropocentrism” (the belief that human beings are the most significant entity of the universe) and “eco-centrism” (the recognition of intrinsic value in ecosystems and biological and physical elements that they comprise, as well as in the ecological processes that connect them). This division often traps environmental philosophy scholars. Hence, Dewi develops the ecophenomenology method which originates from Husserl’s phenomenological thoughts, Merlau Ponty’s subject-object relationships, and the Heideggerian concepts. Phenomenology concerns itself with the ways in which human beings find and construct meaning in the world. If all this time anthropocentrism has seen humans as the central point of life, phenomenology sees that the strict choices between human and nature is unnecessary because they lead to harmony. Ecophenomenology takes up in a tentative and exploratory way the traditional phenomenological claim to be able to legislate for the sciences, or between intentionality and causality.

Ecophenomenology sharply criticises how anthropocentric humans are in positioning nature and themselves. Anthropocentrism views humans as the centre of everything, which gives legitimacy to humans to rule like God. Further, contemporary society perceives science and all its practicality have given all the answers and instructions about what the human experience should look like. Humans continually strive to ‘survive’ until they forget that even they are part of the nature that they really want to take control of. They innovate and develop automation, expecting more instant and convenient life and disregard environmentally friendly technology because it is ‘not quick enough’. In the end, human anthropocentric views of nature have damaged the nature itself.

This book examines environmental philosophy in a comprehensive manner and of course philosophical terms are everywhere. By some means, it makes the book rather hard to digest especially by average readers. Apart from that, more than a half of the book contains phenomenological theories and dialogues derived from philosophical thoughts, leaving not enough discussion for ecophenomenology itself. For instance, there is a lengthy talk about subjects and objects, but the way and to what extent ecophenomenology solves the disequilibrium of human relation with nature remains unclear.

Nonetheless, the message the author wanted to convey is vivid. She underlines the  responsibility of humans to nature, as she departed with the question of why humans do not realise that they are responsible. The author argues that the ethical approach is unsuccessful in engaging humans to understand and commence what must be done. But, when they realise they are part of the environment and start thinking “the nature exists, therefore I am”, perhaps humans are more motivated to deeply understand nature. For that reason, a review of the ontological dimension is needed, as described in this book.

On a side note, the introduction section of this book is enthralling. The author tells her personal story when facing forced-logging of a tree that she treasured. She was a little girl at the time, but she still remembers the emotions she felt and they become a starting point of her thought in discussing ecology. She connects the story to the current environmental dispute like Teluk Benoa reclamation in Bali, Indonesia, a situation that represents natural exploitation that happens in many parts of the globe and continues to occur over time.

Shares
Comments Off on Understanding nature: a review of Saras Dewi’s Ecophenomenology