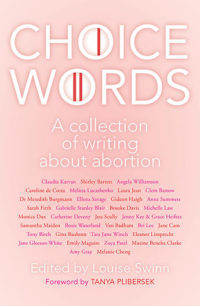 Choice Words: A Collection of Writing About Abortion

In Bri Lee’s “An Absurd Threshold”, freelance photographer Emma is travelling around Australia for work when she realises she is pregnant. Unable to change her travel schedule, she tries to obtain an abortion while circling from Cairns to Darwin to Broome to Perth and back east again, becoming an expert in local abortion laws along the way. At each destination, she is thwarted by anti-choice protesters with cameras and legal cutoffs that differ from state to state. In Canberra, when it’s finally done, she calls a friend from home. The first thing she hears, said “with such warmth”, is “Welcome to the club.”

Edited by Louise Swinn, Choice Words is an anthology of writing about reproductive choice. It is set against the background of Australia’s patchwork of abortion laws, which are mostly made by state and territory governments. In “RU486 in Australia”, Samantha Maiden recalls the passing of the private members’ bill that allowed the use of mifepristone to perform medical abortions in 2006, decades after the option had been made available overseas. In “Out of the Shadows”, obstetrics professor Caroline de Costa traces the history of abortion in Queensland from 1899 to 2018, when the state parliament voted to legalise abortion on request for the first 22 weeks of gestation.

Last week, after more than 70 hours of debate in both houses of parliament, New South Wales became the last Australian state to decriminalise abortion. Yet the legalisation of abortion is only the first step towards reproductive choice. Another important factor in the background to the personal stories in Choice Words is the lack of integration of abortion into the public health system. In Australia, most abortion services are provided by private clinics rather than public hospitals, meaning that market forces can render abortion legal but effectively inaccessible in many parts of the country.

Living in inner-city Melbourne, I was shocked to read “The Apple Isle”, where Angela Williamson breaks down just how much it had cost her – over $4,000 in total, not including emotional distress – to access a surgical abortion 18 weeks into an unplanned pregnancy:

This is my first intersection with a health policy that fails Tasmanians, that failed me. As I look back now, it’s so clear to me that those times were dark and raw, and changed my life.

Like many others, Williamson was forced to travel interstate after the only provider of low-cost surgical abortions in Tasmania closed operations in 2012, blaming the move on the growing popularity of medical abortion. Actually, as Maiden points out, very few GPs around Australia are registered to provide medical abortion, which can cost up to $700, despite promises of a $12 abortion pill when RU486 was added to the Pharmaceutical Benefits Scheme.

Importantly, the essays in Choice Words acknowledge that legal, financial and geographical barriers to abortion access are not the only constraints on reproductive choice in Australia. Decades of neoliberal policymaking has eroded the social safety net for carers – particularly single parents – and there is limited Medicare coverage for fertility services. These policies are influenced by and intersect with attitudes that see white, middle class, married, heterosexual women as inherently more worthy – or, as musician Laura Jean points out in “Day Of”, only worthy – of social approbation and financial support if they desire to become pregnant or to continue an unplanned pregnancy.

These attitudes are alluded to by Maxine Beneba Clarke in her poem “Weight”, where she rejects white feminists’ blinkered vision of expanding abortion access as synonymous with reproductive choice. For women of colour, such choice has historically been curtailed (or, at best, made more difficult) by paternalistic policymaking and racist stereotypes. In Australia, where Indigenous children continue to be removed from their families at record rates, this history remains relevant as ever:

but what none-a them campaigners wanna tell you is

for them not to want us to have kids…

if you a brown girl

with an empty fridge

The contributors to Choice Words include women who already are, who may one day be, or who will never become mothers. Whatever one’s own history of reproductive decision-making, reading their stories is an intensely moving experience. It certainly was so for me, even though I myself have never needed an abortion. Unlike Emma in “An Absurd Threshold”, I have never felt like a ticking time bomb, fobbed off by clinic after clinic because I was a resident of the wrong state, or because I was on the wrong side of an arbitrary cutoff.

Thanks to money, information and pure dumb luck, it was not until I was 29 that unplanned pregnancy happened to me. At the time, my partner was working in a casual job with no paid leave or job security. We were renting a flat in a building that had twice been set on fire by its own tenants. Between the two of us, we owned a 15-year-old car and mismatched furniture from hard rubbish collections dating back a decade.

Yet no one required us to seek counselling about the choice that was as terrifying and completely right as the two pink lines on a pregnancy test that I held in shaking hands one cold spring morning. The GP that I saw at six weeks had no power to veto our decision to bring another person into the world on the basis of criteria determined by politicians. My partner and I are white, able-bodied and tertiary educated. Our decision to become parents was met with immediate social approval (and qualification for financial support such as parental leave payments and tax benefits).

Our daughter turns two this week. I gave birth to her at a public hospital 15 minutes from our home. For me, the out-of-pocket costs of pregnancy and childbirth were far less than what Williamson and other women pay to access a termination, even though the latter would entail far less expense for the state.

The ultimate takeaway from Choice Words is that abortion must be incorporated into our public health system if Australian women are to have real choices about reproduction. Abortion is an integral part of reproductive health services, as much as the care that I received when I chose to continue an unplanned but very much wanted pregnancy. It needs to be readily accessible and free of stigma.