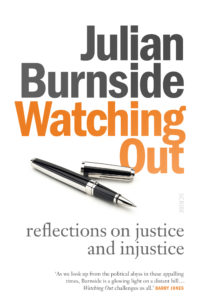 In his book Watching Out: Reflections on Justice and Injustice, noted barrister and human rights advocate Julian Burnside articulates an intelligent overview of Australia’s legal system and, perhaps more importantly, its justice system. Although the two are often conflated, Burnside notes that it is not always possible to produce justice within the legal system:

Watching Out is the successor to Burnside’s bestseller Watching Brief, in which he defended the rights of asylum seekers and refugees, and outlined the necessity for protecting human rights and the rule of law. In contrast, Watching Out instead focuses its attention toward the ways in which the law operates in practice, as well as how it does and does not run true to its ultimate purpose – that is, to ensure that justice is achieved. Burnside deftly explores a wide array of legal issues, including, among other issues, legal aid, class action, assisted dying, counter-terrorism, unjust verdicts, and Australia’s treatment of asylum seekers and refugees.

Unlike the majority of Burnside’s writing, however, its focus is not primarily on asylum seekers and refugees. Rather, Watching Out examines fundamental legal principles – such as the presumption of innocence – and sets out to explain how these principles and laws do not always align with Australia’s ethos of a “fair go”. This inevitably has particular effects on marginalised groups within society, especially in circumstances where there is already a power imbalance in play.

A Bill of Rights would restrict the limits within which parliament can enact laws, thus protecting the rights of those that laws are designed to protect.

“A denial of basic rights is not compatible with a just society,” Burnside writes. “Equally, a society that denies these rights is unlikely to be a decent society since, with few exceptions, the elements of human rights coincide with the dictates of morality.”

A central point of Burnside’s book is that parliaments can pass laws that inflict terrible injustice on various people. To this end, he eloquently argues the case for an Australian Bill of Rights. He explains, with clarity and passion, that a Bill of Rights would restrict the limits within which parliament can enact laws, thus protecting the rights of those that laws are designed to protect.

The real strength of Watching Out, though – as is the case with much of Burnside’s writing – is that it is rich with fascinating case studies. From the vast range of subject matter emerges an overarching narrative, which is rife with passion and intellect, as Burnside finds common themes across each topic. There is a particularly compelling chapter, titled ‘A right to die?’, which sees Burnside argue in favour of voluntary euthanasia.

A valid law is not necessarily a just law.

“What needs to be avoided is the political hypocrisy that claims to value human dignity but is willing to watch human beings die slowly, miserably, as a shadow of the person they once were, and in circumstances against which they have protested while capable of expressing their views,” Burnside argues.

With this example, and others, Burnside reminds the reader of an important fact: a valid law is not necessarily a just law.

Given the complexity of the legal system, this book provides an accessible and vital account of the fundamental legal principles upon which our laws are built. It is a powerful and well-researched meditation on the justice system and how it works in conjunction with – and sometimes in opposition to – the legal system. Although it is not by any means a textbook, it does give the reader a solid foundation from which to inspire further reading to understand why things are as they are. In short, it is an impassioned, eloquent appeal for a fairer legal system.

Watching Out: Reflections on Justice and Injustice is available from Scribe.