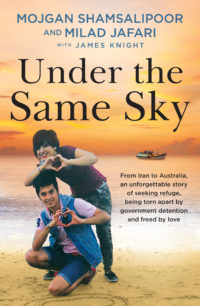 The treatment of asylum seekers is perhaps one of the most contentious issues in modern politics. In Australia, the individual suffering of refugees is often forgotten within the debate but Under the Same Sky can help depoliticise this deeply human issue. While politicians have continually chosen to hide behind the “boat people” label, individual stories such as this one can help shed light on the torment and suffering that occurs every day while Australia turns its back. For this reason, this book is an essential read for anyone hoping to understand the complexities of an issue that is, sadly, unlikely to go away in the coming decades.

Under the Same Sky is a sad and moving book, detailing the journey of Milad Jafari, Mojgan Shamsalipoor, and their families as they move from Iran to Australia only to find a country that was at times still far from welcoming. Yet, the oppression that forces them to flee Iran drives them to find a way to stay in Australia.

For Mojgan, the choice to emigrate came about when her mother remarried and life became difficult and dangerous for her and her brother, Hossain. At 17, Mojgan is about to be married off but rather than stay and face brutality and sexual abuse she decides to flee with Hossain.

For Milad, his love of rap music was not welcome in Iran, yet for his family, leaving was their only choice to avoid imprisonment and execution. Their journey to Australia, years before Mojgan and Hossain, is far smoother. While Mojgan and Hossain continue to face uncertainty, the political climate at the time Milad and his family arrived allowed for their easy transition into Australian life.

In Brisbane, the pair eventually meet and fall in love. Their meeting provides a harrowing comparison of the different circumstances that face refugees in this country, where some are welcomed and given safe-haven, while others are greeted with uncertainty and a potential return to the countries they have fled.

While Milad and his family arrive, and are granted a home to live comfortably, without fear of deportation, Mojgan and her brother Hossein are denied repeatedly, separated and forced to move around the country. This separation of siblings and lovers, so far from home and family, is terrible yet it mirrors the stories of countless other refugees all over the world. In the hope of finding a better life, many are instead forced to overcome more devastating circumstances.

This book is particularly upsetting due to recent developments in Mojgan’s case, which has seen the Department of Immigration order her return to Iran. Her current temporary bridging visa expired on 14 December and if she doesn’t return to Iran she could be returned to immigration detention, where she has already spend almost two years.

Under the Same Sky is an important story that should be read and discussed to ensure that pressure can be placed on the most powerful decision-makers to prevent such a tragedy being repeated.

Under the Same Sky is available from Hachette Australia.