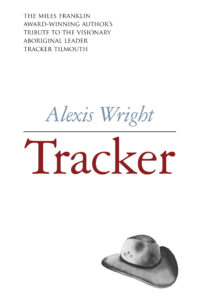 Alexis Wright’s account of Leigh Bruce “Tracker” Tilmouth in her 2018 Stella Prize winning book, Tracker: Stories of Tracker Tilmouth, is important for a number of reasons. The most obvious is that it testifies to the life of an extraordinarily vibrant Aboriginal politician and activist.

A member of the Stolen Generation, supported by remarkable people and drawing on his profound inner resources, Tracker went on to become the Chair of the Central Land Council, as well as helping to establish the Central Australian Aboriginal Legal Aid Service and the Aboriginal health service in the Northern Territory. He also came close to being nominated as the Australian Labor Party’s candidate for the role of senator for the Northern Territory.

The second reason is that it is the work of a major Australian writer, Alexis Wright, who has on this occasion enlisted as collaborators more than 60 people who knew Tracker. These range from the admirable house mother Lois Bartram, who cared for Tracker when he was sent to the Croker Island Mission in 1957 at the age of three (he never lost touch with her), through to Aboriginal activist Murrandoo Yanner and lawyer Sean Bowden, who were involved with him through to the end of his life in 2015. Wright’s own Introduction provides a compelling rationale for the book about her friend and colleague, and her extensive interviews with Tracker allow him to examine his achievements, setbacks and principles persuasively and at length.

Third, the book’s structure, built upon reminiscences, storytelling and interviews, allows Wright to assemble a rich collaborative history of sixty years or more of Aboriginal history and politics, inventive ideas, successful projects and problematic interventions. The emphasis on story-telling is deliberate, as the final section of the book makes clear with Anthropologist Geoffrey Bagshaw saying “one thing that I think is probably true of Tracker, and in my experience is true of Aboriginal story-telling generally, is that of always contextualizing in terms of personal relationships.” When we add to this the fact that, as Allan Cooney says, “he knew everyone; he took an intense interest in national affairs and what goes on in the country, and he knew people. If he did not know someone, he made himself known to them”, you can see why this structure – big, bristling with stories, visions, quarrels, reconciliations, unlikely alliances and hilarious or touching encounters – is Wright’s preferred format for exploring Tracker’s life and contributions.

Tracker was a highly intelligent person, and a creative thinker – someone who had “twenty ideas a day” as one contributor remarks. He strove to combine his deep and hard-won respect for Aboriginal tradition with innovative ideas for building a sustainable Aboriginal economy and “green industry”, and as he himself put it, “creating programs that allow Aboriginal people to live on their land, to develop their land, on a sustainable basis.”

One interesting section studies his contribution to Centrefarm Aboriginal Horticulture Limited, established in 2002 to drive the economic development of Aboriginal land for the benefit of the traditional landowners. He was combative and forthright, and this comes through in many memorable and provocative pronouncements that enliven the pages of Tracker such as “these agreements [such as the MacArthur River Mines Agreement and the Bootu Creek Mine Agreement] … do not deliver anything to the community. … They were written by lawyers”. Or his response to Jenny Macklin [former Labor Minister for Aboriginal Affairs]: “We spent a hundred and fifty million. Yeah? But what is the result? Do not tell us what you have spent, what have you got?”; or to the Northern Territory National Emergency Response of 2007: “the minute you saw the Intervention in the Northern territory, you thought this is madness, absolute madness. It had taken so long to get people to start [working on] self-determination”. On the other hand, here was a man who could work productively with figures like Bill Heffernan and Bob Katter, who would not at first sight appear to be his natural allies. Someone who was inspired by the Israeli kibbutz system and the civil rights movements in South African and the USA, as well as by sources closer to home.

Tracker possesses cumulative power but is not a conventional biography, even though it follows a roughly chronological order. There is no index, so one cannot dive into its pages to locate a particular person or issue or place. There is, however, a helpful glossary and list of contributors that allows readers to identify and locate particular figures and features. If one cannot immediately identify Alison Nampitjinpa Anderson or Noel Pearson, one can flip to the back of the book for information. This works better to preserving the narrative flow of the text than an intrusive accumulation of footnotes, but it does mean that looking back over the 620 pages for a particular reference can be tricky, especially when some stories are repeated by different contributors.

This a valuable and fascinating book, packed with detail. It portrays Tracker as charismatic and paradoxical, infuriating at times as well as tirelessly energetic, inspiring, creative and loyal. I am guessing that a different text that gave more space to his political opponents (of whom there seem to have been a fair number) would produce a different overall effect. But Tracker never seeks to disguise this fact, or to become a one-dimensional celebration.

Tracker: Stories of Tracker Tilmouth, winner of the 2018 Stella Prize, is available from Giramondo Publishing.