With the writs issued for September 7, August has been all about the election. How have human rights issued fared during the campaign coverage and exactly what role is the media playing?

The race to the bottom on asylum seekers 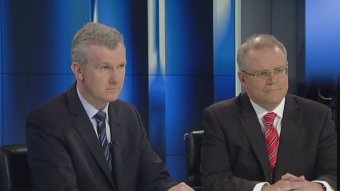 Tony Burke and Scott Morrison on 7.30

The issue of asylum seekers has become a mainstay in federal election policy platforms. Unfortunately, it seems an increased focus on the topic has only served to harden the major parties’ resolve to “stop the boats” and encourage a “race to the bottom” on the issue.

Both the Coalition and the ALP have backed policies with mandatory detention and off-shore processing as their cornerstones. Commentary on the issue has been widespread during the election coverage, with questions posed regarding the legality, necessity and consequences of such hardline policies.

Leigh Sales questioned Immigration Minister Tony Burke and Shadow Immigration Minister Scott Morrison on the ABC’s 7:30 over many of these issues, including why the asylum seeker debate is framed as such a divisive issue when both parties are presenting policies that take a very similar approach.

The interview also addressed whether or not the ALP’s PNG solution proposal is already serving to deter boat arrivals – this followed tragic reports of a boat capsizing off the coast of Christmas Island, which did not appear to incite a revision of Tony Burke’s position that it is.

The impassioned debate surrounding asylum seekers during this election campaign has encompassed foreign media scrutiny, the UN’s findings of human rights violations regarding Australia’s treatment of asylum seekers and the gaining momentum of a high court challenge to the PNG solution.

However, despite widespread and ongoing criticism, a persistent flaw in the discourse is that those who stand to be most affected by this race to the bottom, are all too often overlooked as stakeholders. After all, asylum seekers don’t have a vote come September 7. 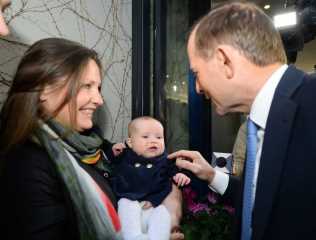 Parental leave has emerged as a pivotal election policy following Tony Abbott’s announcement of the Coalition’s plans for a Paid Parental Leave Scheme which would be linked to the mother’s income rather than minimum wage payments. However, discussion of the proposal seems to have largely sidestepped addressing the broader issue of persisting gender inequalities in the Australian workplace.

Despite some references to “workplace justice,” Tony Abbott has also attributed his “convert’s zeal” to his connection of paid parental leave and boosting the Australian birth rate.

The ALP’s response has largely centred on criticising the Coalition’s scheme’s $5.5 billion price tag, with Kevin Rudd recently pressing Tony Abbott to defend his costings during the final leaders’ debate.

Analysis of the policy has also focused on the old  ideological lines that have arguably been resurrected by the major parties, with the Coalition scheme said to disproportionately benefit high income earning women inciting criticism from the ALP that it is “unfair” to middle class Australians.

Questions that have largely been missing during discussion of paid parental were raised however during ABC’s Q&A.  Despite being an evasion tactic, Bill Shorten began answering Caitlin Spence’s question regarding the fairness of the Coalition’s scheme by reflecting on the challenges and advancements of women in Australia since the 1970s. Issues also addressed included the enduring gender pay gap, the inflexible working arrangements of Australian workplaces and the lack of accessible and affordable childcare, all of which are valid considerations when assessing workplace equality. 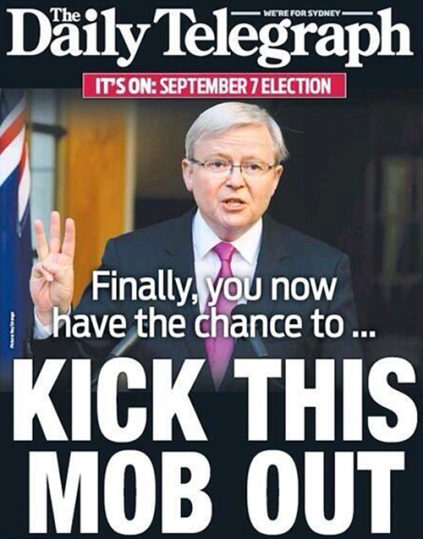 The Daily Telegraph makes its position clear early in the campaign

Back at the start of August, the Daily Telegraph ignited debate over the bias in News Ltd’s coverage of the coming election with a front page headline stating “Kick this mob out” (referring of course to the ALP). This was soon followed by a depiction of Kevin Rudd as Hogan’s Heroes Nazi, Colonel Klink.

Together with the deployment of Col Allan (regarded as Murdoch’s right-hand man) to Australia, these incidents raised concerns regarding the quality and editorial direction of election coverage by News Ltd publications.

Media Watch covered the issued comprehensively and highlighted the bias after monitoring the Daily Telegraph’s election coverage stories over the course of a week and finding half to be negative to Labour, and none negative to the Coalition.

Kevin Rudd went on to call attention to the issue through his assertion that fair election coverage is “the life-blood of a democracy”; a statement echoed by Bob Hawke who suggested the News Ltd’s coverage had done “no justice to the democratic process.” The Australian Press Council also weighed in with a reminder to editors of their election coverage guidelines.

Concerns that News Ltd’s partisan coverage could swing the election  have dominated the discourse, but were joined by Crikey’s piece considering  the potential debt Tony Abbott will be expected to repay if it transpires that News Ltd did in fact back a winner.

Conversely, the ABC’s Jonathon Green has suggested that the influence of print media is waning with trust in the Daily Telegraph particularly low and that consequently the outcry over News Corp’s reporting been unwarranted.

Still, these are important issues that need to be addressed in our news coverage. While some argue that these media outlets are merely exercising their freedom of expression, they do have organistaional and industry codes of conduct that are in place to ensure we, as voters, are informed in a fair and balanced manner by news coverage.