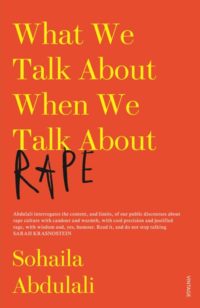 In 1980, 17-year-old Sohaila Abdulali was just another teenager in Bombay, her eyes trained to a life in the United States. Her family had recently emigrated and she was spending a few final days in her family home in India before taking off to new adventures. It was also the year that she and her male friend were abducted by four men, taken up a mountain, abused, threatened, wounded and almost killed. It was on that seemingly regular summer evening in Bombay that she was raped.

Astonishingly, despite multiple voices rising up and a great deal of headway made in society, rape remains a taboo term. Even in 2019, this is more common than we like to admit. In India, we not only avoid the term “rape” we also take care to shift the blame of the rape to the victim. Indian society is programmed to do this, regardless of the brutality of the assault, and we are not alone.

Post the Nirbhaya case of 2012, and more recently the #Metoo movement in 2018, both Indian society and media have evolved to a certain extent. However, in 1980 India when Abdulali’s assault occurred, rape was a non-existent term in India’s vocabulary. Take for example the fact that in 1973, Aruna Shanbaug, an Indian nurse was brutally raped and strangled with a dog chain at work by a colleague, rendering her blind, deaf and paralysed in a vegetative state. Despite the horrific details of the crime the story faded quickly and Indians continued to pretend it was a random occurrence and women were safe within the country. Needless to say, the Indian media rarely took a stance on rape or made an effort to bring the discussion into the forefront.

This was the India that Sohaila Abdulali left behind in 1980. Three years later she came back, having secured a grant to work on her undergraduate thesis on rape in India. Unsurprisingly, she found that few women were willing to come forward to speak about rape, because despite the hard work of a few feminists in the country, rape was still considered a fairly taboo and shameful term. Speaking of that time she says “I don’t know what pushed me over the edge––all the people who kept saying rape didn’t exist for “people like us,” the upper classes; a dirty old man who heard what I was studying and decided it meant he could grope me; or just the growing conviction that I couldn’t possibly be the only one, could I?”

Encouraged to action by the women she interacted with she began by sharing her own story with the only magazine in India which might have published it – a women’s magazine called Manushi. Although it created a small stir in a deeply slumbering nation, it too was quickly pushed out of the news cycle. However, to date, it is remembered as the first official article in the country which speaks openly about a woman’s experience with rape.

In 2012, almost thirty years on, Abdulali had settled into her life abroad and slowly distanced herself from the occurrences of that 1980 evening in Bombay, not because she was ashamed but simply because she had filled her life with too much light to allow the darkness room. And that was when the Delhi-rape case happened. The Delhi-rape case, or rather the “Nirbhaya” case to be more specific, was possibly one of the most detailed rape cases covered by the Indian media. While rape itself is a regular occurrence in the country, so regular that not even all “Delhi-rape cases” make the media, this particular one was horrifying enough to shake the country into action.

On December 16th, a young physiotherapy student called Jyoti Singh was gang-raped in a bus while she was travelling home with a male friend in Delhi. Jyoti’s story was covered extensively by the media who dubbed her “Nirbhaya” or “Fearless”. But, the brutality of her assault left her with extensive internal injuries and she died a few days later. In the aftermath of the Nirbhaya case India finally and fully awoke to the matter of rape.

It was then that Sohaila Abdulali’s story in Manushi resurfaced and began trending on social media as people finally began acknowledging that violence against women didn’t just exist in India, it flourished. Around this time, Abdulali wrote an article for the New York Times detailing her beliefs, ideas and views on rape – pointing out that it wasn’t shameful, it wasn’t the victim’s fault, and it definitely didn’t define them. She emphasised that life after rape did not have to be about surviving, it could be about joyful living. Those same ideas are what What We Talk About When We Talk About Rape is built on.

Written with joy, love and dignity, this book doesn’t just talk about her own story, it talks about the stories of women from all over the world, each of whom have faced the same evil. Because if there is one thing that we have learned from the #Metoo movement it is that sexual assault transcends class, caste and country. She illustrates through real life experiences how we as a society have long supported rape culture by over-scrutinising the victim’s actions, carefully ignoring the fact that that there is “someone else in the picture who also has a choice: a man, who can choose between decency and dominance.”

While this text is a crucial manifesto for a society that is slowly beginning to unlearn, it is also a testament to the bravery and resilience of the stories it tells. Most important of all however, is the fact that this book does not claim to have all the answers. In fact, if anything it is a book designed to help us, as a society, ask questions. In the end, Abdulali simply encourages us to speak out – any way we can. As she puts it, “Breakfast conversation, random tweets, stories in the Metro section—it is all part of the conversation, and it all matters. But the conversation doesn’t include everyone, not yet. Let’s keep talking.”