“Reverie describes the uncluttered imagination receptive to processing free-floating thoughts… for some, the creative arts can provide deep personal enrichment during periods of illness by enabling the expression of emotions to overcome feelings of helplessness.” So the Dax Centre introduces its exhibition Reverie, curated from its own collection of works by people with mental illness or trauma in partnership with the Human Rights Arts and Film Festival. The centre explores the intersection between art and the mind, with the underlying aim of reducing the stigma that surrounds mental health – and more often, mental illness.

“… for some, the creative arts can provide deep personal enrichment during periods of illness by enabling the expression of emotions to overcome feelings of helplessness.”

Despite the rainy cold with which Melbourne has decided to bless HRAFF, a small group gathered on the evening of May 15 to hear the curators of Reverie, Emma Last and Viona Fung, draw out some of the reasons and meanings behind the exhibition. With a focus on wellbeing, rather than illness, Reverie attempts to capture what it is that keeps people hanging in there, the grains of hope behind mental illness treatment and management. As the catalogue accompanying the exhibition explains, almost sixty percent of the works were produced by patients in mental institutions from the 1950s to the 1980s – works which were thrown out by these institutions as they gradually closed down, and about which little is known. Yet there are links that are emphasised by the curation of Reverie, the most striking being the energetic use of colour. The works shown tend to be bright and explorative rather than dark, perhaps representing an inner vibrancy and an internal world that the artist was not otherwise able to communicate. In Joan Rodriquez’s work If only Alcyone would wake (1989), small orange fish swim past a sleeping woman, an image of peace with undertones of anguish only hinted at by the title. Colour features heavily in the works salvaged from psychiatric institutions, and the catalogue explains, “these artworks mirror the ambitions of early twentieth-century avant-garde artists such as Wassily Kandinsky in the exploration of colour as a direct language of the emotions.”

The works shown tend to be bright and explorative rather than dark, perhaps representing an inner vibrancy and an internal world that the artist was not otherwise able to communicate.

Taking place the night following HRAFF’s panel discussion on the ethics of the film Walk Away Renee, Last and Fung explored the consent issues they faced when using works that were often obtained – and are now displayed – with no informed consent from the artist. In wondering what right the Dax Centre has to use these works to present a particular viewpoint, they emphasised audience response, and the ability of art viewing to produce reverie as much as art production, as an ethical justification for the centre. At the same time, their approach to curation is a careful, collaborative process, taking from multiple perspectives (including an ethics committee) to ensure the works are used in a sensitive, educational way.

Yet Reverie effectively communicates the importance of knowing stories of mental illness and trauma, as well as their use in destigmatising those who experience it, and the absence of information behind many of the works is itself a reminder of how important it is to know these stories. 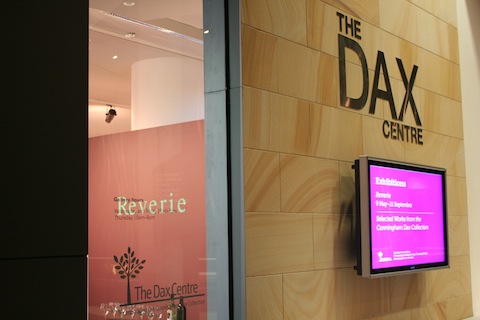 Reverie is running at the Dax Centre, Kenneth Myer Building at University of Melbourne until 21st September 2013 and entry is free. More information here.