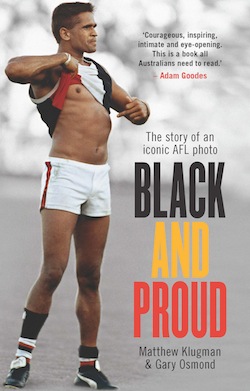 It has been more than 20 years since St Kilda footy legend Nicky Winmar stood amid the cacophony of verbal abuse and racial hatred of opposing Collingwood fans and lifted his jumper to point to the colour of his skin – uttering the now iconic statement, “I’m black and I’m proud to be black”.

Winmar’s act – captured by two rookie photographers Wayne Ludbey and John Feder – would later shine a light on the widely ignored instances of racism that were festering in the ranks of the much-loved national sport and force Australia to confront its race relations problem head-on.

In Black and Proud, academics Matthew Klugman and Gary Osmond use the seminal image of Winmar’s act on April 17, 1993 as a focal point to discuss the racism that pervaded through much of the country – and specifically AFL football – in the time leading up to Winmar’s moment in AFL history, and the ensuing dialogue that took place in its wake.

“Yet it also brought something new to the protest images of Indigenous Australians – a clear declaration of pride.”

Winmar’s pose was “an image born out of trauma”, turning him into an unwitting harbinger of change as the resonance of his act went on to provoke a domino-like effect in the Indigenous fight for equal rights and representation. As Klugman and Osmond highlight, “Winmar’s gesture was compelling. Like many other key images of the Indigenous rights movement, it was at once a searing protest and a powerful ‘statement of presence’ and identity. Yet it also brought something new to the protest images of Indigenous Australians – a clear declaration of pride”.

The 1990s in Australia was a fraught, yet incongruous time, for Indigenous Australians. 1993 was crowned as the International Year of the World’s Indigenous People, the movement for Indigenous land rights was gaining momentum, and Paul Keating’s now famous Redfern Speech preceded Winmar’s act by just a few months. Klugman and Osmond expertly conjure these familiar events with deft storytelling, breathing new life into events already consigned to the annals of history.

As Winmar’s gesture neatly lay bare however, institutionalised racism was so entrenched in the prevailing mindset of the time that it often went by unremarked, “silenced perhaps by a system that tacitly condoned the culture of racism”. Players’ admissions that they intentionally unfurled racist comments to unhinge indigenous rivals, Collingwood president Allan McAllister’s claim that Indigenous players should “conduct themselves like human beings”, AFL authorities’ silence on the matter, and the general public’s continued antipathy towards Indigenous players on field tapped into the preoccupations of the time.

The book is at times a tough read, with historical narratives of Indigenous dispossession, disempowerment and near extermination chronicled in close detail. But it is these very stories that make what happens after so significant, as Klugman and Osmond contextualise the discrimination Indigenous footy players faced – often playing to taunts such as “petrol sniffers”, “abos”, “coons”, “niggers” and “boongs” from a white-dominated audience of footy supporters – in sporting grounds that were previously deemed sacrosanct by their forefathers as places of worship and corroborees.

Winmar is the star of this story, but indigenous footy players Gilbert McAdam, Chris Lewis, Michael Long and Dale Kickett, who were at the forefront of cross-cultural training programs and the revolutionary Rule 30, feature prominently. Interestingly, Klugman and Osmond devote considerable pages to detailing the background and motivations of photographers Wayne Ludbey and John Feder – going to the heart of why these two rookie photographers deemed the image of Winmar’s pose so vital and the subsequent resistance they faced when trying to publish it.

Various writers and social commentators have unmasked shocking instances of bigoted behaviour and prejudice that exists within AFL football. In her Stella Prize-shortlisted novel Night Games, writer Anna Krien exposes the oft-troubling aspects of a macho, masculinised footy culture that demeans women and wades knee-deep into the “murky waters of rape culture”. Indigenous writer Celeste Liddle has implored the AFL to do as much against sexism as it does against racism, while feminist social commentator Clementine Ford has outlined the AFL’s institutionalised problems with the sexual treatment of women.

Like these critiques that stand in a long line of continued discrimination, what makes Black and Proud ­ particularly resonant in this day and age is the fact that the inequality Nicky Winmar faced is still in play today. Young Indigenous Canberrans are 10 times more likely to be put in detention than other children their own age. More than 60 per cent of assault cases across the Northern Territory are associated with domestic violence, and many of the victims are Indigenous women.  There are still a disproportionate number of Indigenous deaths in custody. Life expectancy for Aboriginal and Torres Strait Islander people is around 10 years less than that of non-Indigenous people. Around 45 per cent of central Australians are indigenous, yet a very small number of them sit on juries.

Klugman and Osmond perhaps chose AFL football as a jumping off point to assess the sustained oppression indigenous Australians face because, as they say, “sport reaches into a part of culture that the courts and politicians” struggle to access. Black and Proud is confronting, illuminating and thought-provoking – but most of all, it ends with a rousing call for action. While it cannot be denied that AFL football – and more broadly the Australian culture of racial acceptance – has developed in leaps and bounds, there is still much work that needs to be done to combat the “putrid head” of racism.

“Perhaps the enduring appeal of Winmar’s act also lies in the continued racism and discrimination faced by Australia’s Indigenous peoples. His gesture not only retains a fresh edge, but also continues to represent a demand for change.”