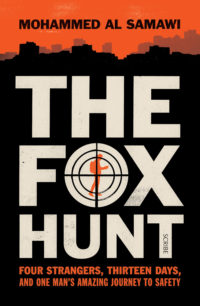 Mohammed Al Samawi’s The Fox Hunt starts dramatically on March 22, 2015 in Aden, Yemen. Al Samawi is stuck in the bathroom in his new apartment where he’d fled to escape the constant threats on his life during what turned out to be the beginning of the Yemeni Civil War which still rages unabated. With mixed factions vying for control of the entire country, from President Hadi loyalists and his supporters to Houthi rebels and Al Qaeda in the Arabian Peninsula (AQAP) on the other side.  Indeed, the AQAP checkpoint is seen through the small gap in his curtains and social media checks, albeit timed to when the area has working electricity, allows Al Samawi to keep check of the escalating dangerous situation.

As a vocal Yemini peace activist, Al Samawi was keenly aware of the danger in which he found himself in, indeed, this is explored in memoir style as he recounts how he overcame childhood loneliness arising from disability, heard in taunts such as “Mohammed the maimed” or his own creation of Ana hemar “I am a donkey,” to wanting to explore and learn about other cultures and religions in a more meaningful way. This, we find, is quite difficult in Yemen where there are strict parameters around religion in the predominately Muslim country. In writing The Fox Hunt Al Samawi offers us a glimpse into Yemen’s social and religious history and the complex ways in which different countries and factions have had their hand in creating and maintaining a “Yemini” identity.

Coming from an influential family who are said to be able to trace their lineage back to the Prophet Mohammad, Al Samawi writes about the influence of Saudi Arabia on the educational curriculum and religious ideology. He writes, too, of primary school lessons denouncing Israel and the Jewish faith and the shooting of Palestinian child Muhammad al-Durrah during the second intifada that impressed upon other Yemini children the vulnerability of youth and, with the clarity that only retrospective consideration offers, the hatred that comes with indoctrination against everyone classed as ‘other’.

The author’s questioning of the status quo leads to a fascinating and intensely personal journey in which he starts to question everything that he has been taught, from anti-semitic rhetoric to how to deal with personal relationships – and forgoing potential love for an arranged marriage – to the big-ticket item of wanting to explore the various interfaith dialogues that he started to come across in his quest to educate himself about religions other than his own. It’s this exploration that makes Al Samawi so dangerous to the newly emerging Yemen backed by religious hardliners and extremists.

Al Samawi’s The Fox Hunt’s personable writing style easily draws the reader in to not only the authors personal life, but the lives of others who feature throughout the book. As friends and acquaintances pull together to try to save the life of one person who is trying to bridge a gap in progressing interfaith dialogue – we become keenly aware too of the impact one person can have and the change that one person can bring.