Listening to a site-specific audio theatre work about Vietnamese nail salons while getting your nails done is not something you do every day. Hence my excitement at the prospect of attending Next Wave Festival’s Talon Salon, only compounded by the fact that the chosen venue – Paradise Nails – sits on the ground floor of the shop-house I live in.

Talon Salon is the brainchild of playwright Michele Lee, who was undergoing a routine pedicure when the seed of an idea was planted in her head. “Being a female Asian in an all-Asian female business made me think about the social dynamics that created that particular nail salon and many others that I was seeing more and more of back in Melbourne”, Lee says.

“… a piece that privileged the male voice, and also heightened the idea of masculinity and conversely, femininity and how the decorated female is so easily consumed as a notion and practice, but placing men in the context of beauty seems an odd fit”.

“In Melbourne, the growth of nail salons has been largely thanks to the migrant Vietnamese community”, she states, although she is careful to add that the project is not an exhaustive account of the Vietnamese-Australian experience but rather an informed, creative project centred around them.

Months of academic research culminated in four audio theatre works, each replete with evocative thought-provoking material that draws upon the world of nail salons. Interestingly enough, each track corresponds with four OPI nail polish colours, from the vibrant tangerine hues of “A Roll in the Hague” and the rich “Big Apple Red” to the soft candy pink of “Bubble Bath” and the midnight plum “Lincoln Park After Dark”.

Confronted with the difficult decision of which nail polish colour to choose and subsequently which track to listen to, I finally chose “Big Apple Red” which corresponds with the “Husbands” track. “Husbands” is narrated from the perspective of men that frequent a nail salon, while my second choice, the midnight plum “Travellers” tells of an unexpected friendship that blossoms between two people serenaded in a bar.

The appeal of bright red nail polish ultimately won me over because choosing between the two tales proved too difficult. It turned out that I had chosen one of Lee’s favourite tracks; she says she was inspired to create it after meeting a couple who shut down their small salon in Kew because the husband felt out-of-sorts working in close proximity with so many women. “This inspired me to think more about creating a piece that privileged the male voice, and also heightened the idea of masculinity and conversely, femininity and how the decorated female is so easily consumed as a notion and practice, but placing men in the context of beauty seems an odd fit”.

Greeted with a smorgasbord of sounds, voices and music that pervaded my senses as soon as the headphones descended onto my ears, I was submersed into the world of Vietnamese nail salons.

Although the colours of these particular tracks would have clashed horribly with my complexion, each sounded enticing: the soft candy pink “Telephone”, detailing the relationship of a girl in Ho Chi Minh with her estranged aunt in Melbourne, and the rich tangerine “The Chair”, an account of universal nail technician Annie. 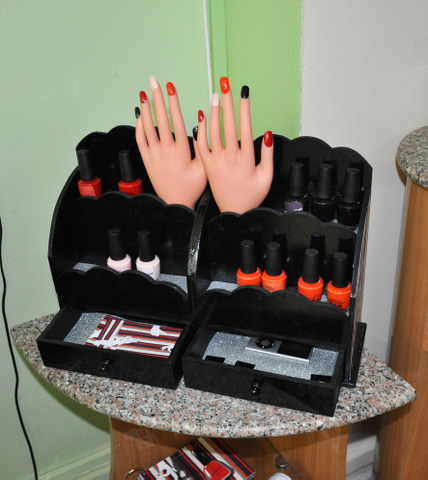 Lee says she was careful not to choose colours that were “too wacky” in case they disadvantaged the tracks. Instead, the colours reflect the emotional timbre of each track, and choices on the colours were guided by what were the most sought after at Paradise Nails.

When my turn arrived, I was guided into a chair and told to soak my hands in tepid water. No sooner was I enjoying the pleasant sensation of warmth against my skin than my body started moving curiously in sync with the chair, which turned out to be one of those special vibrating, massage sorts that most of us can only dream of owning while staring wistfully into a store window. Well aware that I probably resembled a quivering walrus, I relished the sensations nonetheless and readied myself for the audio track.

Greeted with a smorgasbord of sounds, voices and music that pervaded my senses as soon as the headphones descended onto my ears, I was submersed into the world of Vietnamese nail salons. Sitting within one getting my nails done only intensified the surreal feeling that I was one with this fictional world that I was listening in on.

The 40-minute long “Husbands” comprised three main characters interspersed with the onomatopoeic trickling of water, a radio show playing in the background, the jarring sounds of trams moving back and forth, the dulcet tones of a crooning Whitney Houston and the gentle murmur of people conversing in the surroundings. 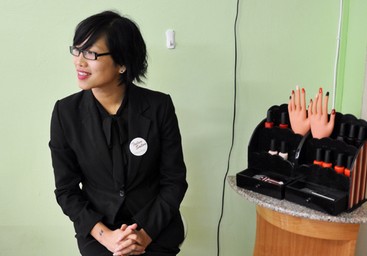 The three characters I became familiar with were Chin, the husband of the nail salon’s owner and incidentally one of Lee’s favourite characters, Paulo, a young gay man who frequents the nail salon, and Benny, a lost soul who wanders the street outside the salon.

All in all, my first manicure at Talon Salon was a fascinating foray into the world of nail salons. Listening to the audio theatre work was akin to a meditative experience as I was pampered by the gifted nail technician and treated to myriad conversations – each as important as the next in illuminating the world of Vietnamese-run nail salons. Plus I love my nails!

Lee says that apart from getting a great manicure or pedicure, she hopes people who attend Talon Salon are reflective on what the manicure or pedicure actually entails. “I hope they are thoughtfully complicit about the relationship they have entered into, with the nail salon and our project”.