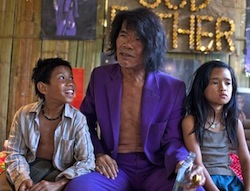 The Rocket, by director Kim Mordaunt (Bomb Harvest) is a Lao-Australian feature film that tells the story of one child’s battle to overcome Lao superstitions that question his existence. Carefully woven into this tale is also the story of the country of Laos, the most bombed place on the planet and a place where the government is displacing people for the sake of profit.

Ahlo’s childhood is filled with accusations of him being the harbinger of bad luck. These are fuelled by his grandmother but sheltered from him by his mother. After an unfortunate series of events, Ahlo must try to prove that he is capable of bringing good luck to his family and wants to enter a rocket festival so that he can win enough money to enable his family to purchase a house and land.

Along the way, Ahlo is introduced to Uncle Purple, an outcast in the makeshift village that has no running water or electricity.  Entire villages have been relocated by the Lao government, who appear to be working in conjunction with an Australian-Lao venture to dam rural Laos and on-sell the electricity to Thailand and China. Promises of new houses and remuneration for their old one’s are increasingly looking unlikely to materialise; the displaced communities are forced to live in conditions akin to the Vietnam war era concentration camps that were opened in Laos during the war, in which thousands of people perished.

During the Vietnam war, Laos was subjected to bombing by the allies in an attempt to destroy the infamous Ho Chi Minh trail. As a result thousands of unexploded ordinance litter the countryside.These rusted carcases litter Laos and are a poignant reminder of the war, long forgotten by the Allies but ever-present in Lao society. Casualties and loss of limbs from exploding bombs still occur some 40 years after the war and Mordaunt cleverly weaves this narrative into the film, with their threat never far away. Uncle Purple’s character also alludes to the fact that the CIA trained Hmong fighters as part of their war effort against Vietnam, who are now hunted and viewed as outsiders in mainstream communist Laos. The film manages to incorporate all of these elements wonderfully and with dignity.

Mordaunt has remained faithful to the history of the country and indeed it’s people; this shows in the expert performances by the Lao cast. The Rocket shines a light onto human rights issues in Laos that until now, have found very little traction in mainstream cinema, let alone in the media. It’s great film that leaves a lasting impression and one that hopefully encourages people to seek out more information about this landlocked country and it’s tragic past. 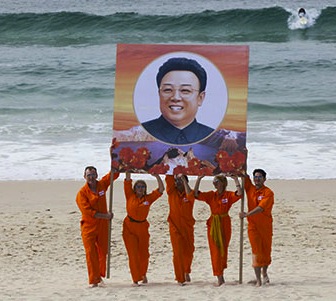 Directed by Anna Broinowski (Forbidden Lie$), Aim High in Creation! is a fascinating look behind the scenes of one of the biggest propaganda machines (aside from Hollywood!) in the world – that of North Korea. It is also the story of an Australian director’s travels to North Korea for advice on how to make a film about the dangers of fracking, something that is of increasing importance in the Australian and global landscape.

Broinowski heard that that her local park would be subjected to fracking – the process of drilling and injecting fluid into the ground to release natural gas trapped within the earth. There are concerns this process causes pollutants and toxins to enter the immediate community.

In order to get people interested in the issue, Broinowski thought it opportune to seek the wisdom of the North Korean cinematic elite in the hope that she could produce a movie that would capture the hearts of the people, in the way that North Korean cinema does (though admittedly, North Korea does have a captive audience). The documentary plots her visit to North Korea to seek guidance on filmic principles set down by former leader Kim Jong Il and provides insight into the machinations of it’s film industry.

Aim High in Creation! is engaging because it provides a juxtaposition of two very different cultures while highlighting the commonalities – cinema is used by both to highlight key issues within society in the hope of a wider dissemination of the message. The result is a hybrid Australian-North Korean production that certainly get’s the message across in an entertaining and highly novel way.

Aim High in Creation! doesn’t shed any light on human rights issues in North Korea, nor does it purport to do so, rather it uses North Korea as a mirror to Australian society and provides examples of where the environment rather than politics and money has triumphed.  It’s an entertaining documentary that is well worth seeing and will perhaps teach you a thing or two about how to make a novel impact.