Can, and should, puppets be gay? Is QandA wasting time? How has Guardian Australia stacked up on human rights news in its first month? We address these questions in this month’s review of human rights in the media.

What happens when Bert and Ernie cuddle… 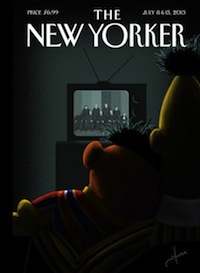 Last week, in a significant win for same-sex marriage in the US, the Supreme Court overturned the Defence of Marriage Act. The New Yorker hasmarked the occasion by releasing a cover featuring Sesame Street’s Bert and Ernie affectionately sitting together watching the ruling.

Unsurprisingly, this simple, yet powerful image has drawn vocal criticism.

“It is beneath contempt for a magazine of The New Yorker’s stature to use Bert and Ernie, characters from a children’s program, to celebrate behaviour which is immoral, unnatural and unhealthy.”

Criticism also came from some of those celebrating the ruling, who found the image “infantalising and offensive”, or saw it as a “terrible way to commemorate a major civil rights victory” because the characters lack the body parts to be sexual in any way.

Sesame Workshop has responded to the controversy by pointing to comments it made in 2011 following a petition for the pair to wed, that state the characters are “best friends” and “[e]ven though they are identified as male characters … they remain puppets, and do not have a sexual orientation.”

Maybe their lack of genitalia is both irrelevant and at the very heart of the matter. Homosexuality is not merely about sexual activity. The image displays affection between two males. Does it matter whether they have genitalia? Obviously the TV image contextualises the message, but what’s wrong with children seeing two males showing innocent, healthy affection?

For decades, Miss Piggy’s affection for Kermit has been a running theme of The Muppets, and the pair – also puppets with no sexual orientation – were married in Muppets Take Manhattan (though Kermit says they were just acting). If Miss Piggy and Kermit can have a loving, non-sexualised relationship then why couldn’t Bert be awfully fond of Ernie?

In 2012, a report commissioned by the BBC recommended introducing children to sexual diversity in their early years. This doesn’t mean sex per se, or stand at odds with efforts to address the increasing sexualisation of the media.

Gay rights are not just about what happens in the bedroom, and the reaction of various camps to The New Yorker cover suggests that innocent mediums like Sesame Street may be perfectly suited to building greater tolerance. 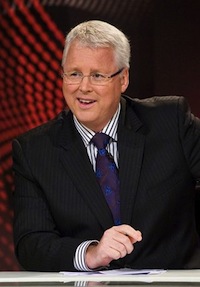 Whether the fault of a dysfunctional political party or superficial media (or both), after last week’s drama in Canberra it was no surprise that Monday night’s QandA dedicated just about the full hour to party politics, with a light sprinkling policy discussion.

On the first QandA for 2013, more than 40 minutes into the episode, host Tony Jones stated:

“… we’ve got some policy questions coming up and I’d like to get as many of those as we can. During the course of this year, we’ll do that more and more with big policy debates as well.”

It was a promising statement, curiously emphasising the often-excessive amount of time lost to superficial politics. Two policy questions followed statement; the final one, exploring Indigenous affairs, sits under the telling heading “Real Issues” in the episode’s online transcript.

Since then QandA has featured two ministerial debates, on education and health. Those episodes, as well as one in which the former Prime Minister Julia Gillard took questions from an audience of school children, have been highlights of the year and tackled a range of important policy questions.

However, policy hasn’t always featured as heavily as some of us had hoped. That said, issues of social importance have been the basis of many QandA discussions.

Trawling through the year’s transcripts, it was a pleasant surprise to realise that twelve of the 22 episodes so far featured no questions relating directly to party politics. Issues such as sexism, refugees and asylum seekers, Indigenous disadvantage and climate change have regularly been discussed, while euthanasia, disability and religious freedom have also had their moments.

However, nearly four hours in total this year has been dedicated to discussing turmoil and leadership tension within the ALP or speculation on the Coalition leadership. That’s around 18% of discussion time and 11 minutes per episode. Looking just at the 10 episodes where it has been raised in questions, it has been the topic of conversation for about 24 of the 60 minutes, on average.

That is not to say that drama within Australia’s governing political party is not worth addressing; rather a suggestion that perhaps it has been excessive and wasteful on a popular and engaging show like QandA – which is at its best showcasing diverse and intelligent voices on a range of issues.

It’s worth considering what viewers gained from those four hours, and the opportunities to explore other ‘real issues’ that have been lost.

The Guardian launches into Australia 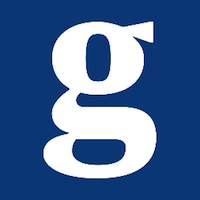 A new player entered the Australian media landscape in late May with the launch of Guardian Australia.

An offshoot of the UK publication, the site has been received with much enthusiasm, particularly among progressives.

Utilising its global network in the same way News Limited and Fairfax subsidiaries share content across state-based subsidiaries, the immediately noticeable difference is the high proportion of international news on the home page. While this means less localised content, it also largely crowds out the ‘lifestyle’ and more trivial articles that fill space on other news sites in favour of broad coverage of important global and national issues – including human rights.

Through their ‘Comment is Free’ (CIF) network The Guardian sources content from Australian and international freelancers and blogs, expanding their voice on a range of issues, though most focus on broad political and/or social issues. Two international feminism websites, Feministe (US) and The Vagenda (UK), are part of the network, and Guardian Australia has established a partnership with the Australian guest Twitter account, IndigenousX.

In general, human rights news is given greater priority, and related content is easier to find, than on other Australian news websites. Major issues with their own categories include feminism and gender, abortion, gay rights, freedom of speech, and freedom of religion. However, other than Australian immigration and asylum, these categories are based on global, not national, news.

On the national front, Guardian Australia, along with New Matilda and The Global Mail, last month launched The Detention Logs, which reveal a long list of incidents in Australian detention centres. They also featured local human rights commentary such as account from an asylum seeker living under the no advantage rule, and articles on religion and sexuality and children living below the poverty line.  Such pieces might appear on the opinion pages of other mastheads from time to time, but The Guardian Australia’s CIF section has allowed it to go further more regularly in exploring a range of issues.

However, articles appearing under the CIF banner are not paid for by Guardian Australia, despite being published on a major news website. This is itself an abuse of rights, according to writers like Elmo Keep.

For the Australian media landscape, The Guardian Australia so far seems to be a valuable addition; however, it faces its own challenges in presenting important stories to Australians.