A bank manager pensively flicks through a young couple’s financial statements, pauses, and refuses to grant them a mortgage.  A Spanish film of 2012 may well have undertaken, from this point of departure, an exploration of the difficulties of finding and keeping work at a time of economic crisis.  Instead, this film explores the move from work to a sedentary life, from being the centre of and responsible for a family to being on its periphery.

Emilio begins life in a nursing home with an awkward goodbye from his son, and a joke from his new roommate, Miguel, that falls flat: ‘How do you like your cell? What are you in for?’ The first day ‘in’ is a somber meditation on sudden disconnection, on being idle and alone. The imposing gates to the outside world close shut in what is one of many poignant metaphorical vignettes. 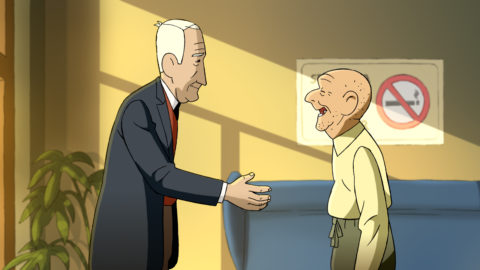 … flashbacks to the childhoods and youths of various characters provide a depth of understanding that would otherwise be difficult to access.

The experiences that follow are a mix of frustration and friendship, anger and acquiescence, boredom and animation, deterioration and spirit.  The film is a journey of growth for Miguel, whose despair at his situation and the dehumanising treatment of other residents gives way to camaraderie.  He begins by suggesting that it ‘doesn’t matter’ how they are treated.  This despair threatens to engulf him, and builds alongside a love for his friends that provides a vision of what they were, and more importantly what they still are … even while being overcome by Alzheimer’s.

Wrinkles offers interesting insight into Emilio’s perspective, as well as his frustration at the frustrations of others towards him, while flashbacks to the childhoods and youths of various characters provide a depth of understanding that would otherwise be difficult to access.  It is no wonder this clever and compelling film has been nominated for, and won, several recent film festival awards, and has drawn praise from around the globe. 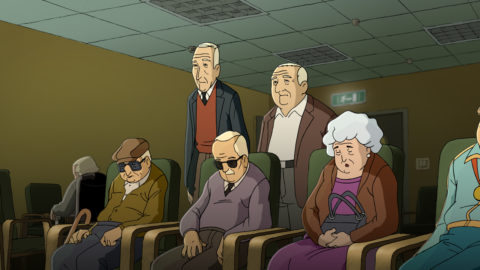 The screening of Wrinkles at ACMI Cinemas on Friday 18 May 2012 at 7pm will be followed by a panel discussion.  The panel will be made up of the Aged and Community Care Victoria Manager of Residential Services and Department of Health and Ageing advisor, Kate Hough; the Secretary of the Board of Alzheimer’s Australia, Neil Samuel; author Tom Valenta, whose Remember me, Mrs V? is a memoir dedicated to his first wife, Marie, who died of Alzheimer’s disease in 2009.

The film and discussion to follow promise to be an important component of HRAFF, bringing to mind as they will the unique challenges facing the elderly and the need for cross-generation solidarity in promoting of quality of life and dignity across all ages.

To purchase tickets to the screening of Wrinkles, click here.