Set against the backdrop of Europe’s enduring vilification of Gypsies, Our School is the poignant depiction of three pioneer participants in Romania’s initiative to integrate Gypsy children – otherwise known as Roma – into mainstream Romanian schools. Eight-year-old Alin, 12-year-old Beni and 16-year-old Dana, who live in the quaint Transylvanian village of Targu Lapus, take centrestage in the documentary as they venture out into the city school after their existing village school is desegregated.

Shot over four years, the documentary follows the individual journeys of Alin, Beni and Dana and canvases various viewpoints in its portrayal of the Roma children and their segregation from mainstream society …

Fuelled by a newfound sense of optimism that they may finally be privy to good education and Romanian friends, the children quickly become astutely aware of their differences from the comparatively privileged Romanian children, the deeply entrenched prejudice that lies dormant among school teachers, and the differential treatment they receive due to the colour of their skin and the culture they descend from. As the Roma children struggle to master the fundamentals of mainstream education, the mayor of the town squanders European funds earmarked for integration in a questionable attempt to renovate the old ‘Roma-only’ school in Targu Lapus that the Roma children can return to after a year in the city school.

Shot over four years, the documentary follows the individual journeys of Alin, Beni and Dana and canvases various viewpoints in its portrayal of the Roma children and their segregation from mainstream society – from their parents and those school teachers who sympathise with their plight, to the school’s principal, and prejudiced parents of Romanian school children. 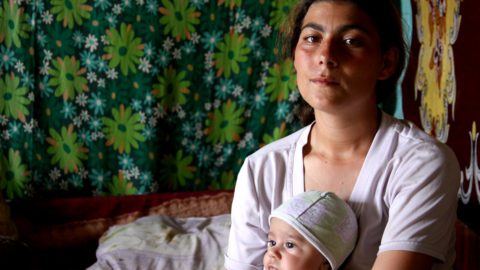 The myriad perspectives provide viewers with a broader understanding of the marginalised status of Gypsies in Romania and the yearning of the Roma to escape the deep-seated stigma and seemingly endless cycle of poverty they find themselves locked into.

Shots of the idyllic village of Targu Lapus where the Roma live, eat and play are effectively juxtaposed against the steely and uninviting interiors of the Romanian classrooms, while romantic Western portrayals of gypsies as free-spirited individuals shrouded in mystery and mysticism are debunked through the depiction of the Roma village, which tells of abject poverty and missed opportunities.

Despite depicting a subject matter that is often dark and disheartening, the documentary is not without its light-hearted moments. The antics of the innocent Roma children lend a certain gaiety to the documentary, as footage of Alin unsuccessfully riding a pig in his village, or of Beni playing tag in the school playground elicits the odd smile.

The unravelling of events eventually culminates in a heart-wrenching, galling ending that pulls at the heartstrings and leaves viewers with a bitter aftertaste and tacit understanding of the incomprehensible violations of human rights that plague the Roma people.

Our School is screening on Thursday 17 May 2012 at 6:30pm, at Melbourne’s ACMI Cinemas. To purchase tickets, click here.

On Wednesday 30 May 2012 at 7pm, at Sydney’s Chauvel Cinema. To purchase tickets click here.