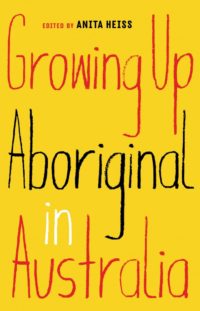 Growing Up Aboriginal in Australia

Dr Anita Heiss, Wiradjuri woman and prolific writer with the well-known 2012 memoir Am I Black Enough For You in her back catalogue, has published the anthology Growing up Aboriginal in Australia, a collection of short stories from a diverse number of indigenous Australians that speak from the heart and provide deeply personal insights into what it means to be an Aboriginal Australian.

A nationwide call out for nonfiction submissions saw more than 120 accounts about growing up over country from Noongar in Western Australia to Gumbaynggirr in New South Wales to Kuku Yalanji in the rainforest areas of Far North Queensland and all places in-between. The submissions chosen for the book are therefore just a part of the personal experience that individuals wanted to share with a wider audience, a part carefully curated to illustrate the breadth of experiences so that readers may ponder on the content of stories not yet shared into the public realm, but which are very much a part of the shared experience of Indigenous Australians.

While each story is as individual as the person sharing it, there are experiences that are shared amongst the writers that deeply impact upon themselves, their families and their own sense of growing up and identifying as an Aboriginal Australian. The Stolen Generation, the forced removal of children from their parents from 1869 onwards, has had catastrophic effects with the suffering passed down to each generation ­– if they’ve been able to reconnect. Experiencing overt and subtle racism and a feeling of trying to find self between “two worlds resting in on each other,” as eloquently described by Evelyn Araluen in the piece Finding ways home is also a shared experience amongst contributors.

Araluen, at twenty-four, reflects upon how her identity changed in the shift from primary school to teenage hood and high school and how she was called names such as “shit-skin” and “Abo” at the same time she was she learning to celebrate her ancestral heritage.  Alice Eather’s Yúya Karrabúrra which starts with an evocative poem using some Ndjébbana language also speaks of walking between two worlds, mentioning too the prevalence suicide has on communities and young indigenous people. Alice’s contribution is particularly poignant as, at the age of twenty-eight, she took her own life.

The pieces vary in length, ranging from two pages such as Taryn Little’s Just a young girl where she writes of her memory of smashing cherries, at twelve-years old, into beloved cousins at a family friend’s farm, to the longer A story from my life by William Russell on the complexity of identity. Each contribution though has a strong connection with being an Aboriginal Australian, on country, about country, talking about awareness of ancestral heritage or the passing down of memories and identity that makes each writer unique but part of the tens of thousands of years of history that follows them on their journey in contemporary Australia.

Growing up Aboriginal in Australia is an important anthology that serves as a collection of public history, the personal tales providing insight into the everyday experiences that have shaped and continue to shape Aboriginal Australians – in many different and diverse ways.