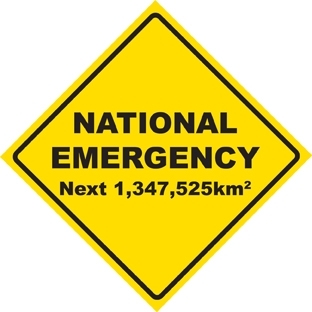 Curated by Jo Holder and Djon Mindine OAM, Ghost Citizens: Witnessing the Intervention is an exhibition of paintings, sculptures, videos and installations made in response to the Northern Territory Emergency Response Act 2007 (Cth) (‘NTER’),  implemented by the Howard government. Additionally, the exhibition tracks the development of the NTER Act to the present day, and the similarly racist ‘Stronger Futures Policy’.

The exhibition features the artwork of eight Indigenous and five non-Indigenous artists, each of whom interpret the Intervention according to their own experiences. As a result, the overall narrative of the exhibition is not to be understood in a linear or chronological fashion, but rather absorbed as a web of intersecting stories and historical events, where each art work is a ‘document that … re-draw[s] history to challenge ideology and recall events.’

Although the exhibition coincides with Reconciliation Week 2013 and comes five years after Kevin Rudd’s national apology to children of the Stolen Generations, works such as Brendan Penzer’s ‘Basic Cards’ quickly remind the viewer of gross inequalities suffered by Indigenous people. The viewer is free to take their own ‘Basics Card,’ an instrument of the governments’ ‘Income Management’ program for Indigenous Australians. These cards limit where and on what an individual can spend their money. Penzer’s cards state that they are ‘designed to shame, stigmatise and marginalise the person who holds it’.

The exhibition also displays two videos entitled ‘Interventions Talks 1 and 2’ which feature a range of speakers (including Eva Cox, activist Gary Foley and Rosalie Kunoth Monks OAM) discussing the Intervention. This supports the precept that Ghost Citizens not only documents and critiques the Intervention, but also establishes a dialogue between viewer, artist and the broader community to strengthen Indigenous sovereignty.