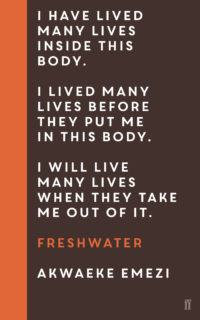 Akwaeke Emezi’s debut novel Freshwater follows Ada from birth into her late twenties on a journey of embracing herself as obganje, an Igbo spirit. Emezi describes obganje as a spirit that occupies a human being and is at once human and beyond human. The spirit is multiple and conflicting in identity and does not feel at home in the fleshy confines of the human form.

Freshwater begins in the voice of the obganje, a collective we, living in the infant Ada’s body, longing to be free of it, pushing at its edges with contempt. With a riot in her mind, Ada longs for intimacy and sanctuary in a world that cannot offer her enough. As she grows up the obganje grow with her. The spiritual entities crystallise and gain power when she needs them, when she is in so much pain that her consciousness as it is, is no longer enough.

The first distinct identity that forms in Ada’s mind is Ashugura who arrives after Ada travels to America for college and is raped. Emezi’s description of Ada’s experience of rape is searing. Her visceral prose gives the reader a sense of the unbearableness of it in their bones.

While Ada becomes increasingly passive and disconnected from her body, Ashugura revels in her flesh, feeding on her desire and the desire of others. “I felt full with a rich and thick power,” Ashugura says, “It tasted like if you roasted blood with salt and capped it in a jar, cooked with it, seasoned meat with it, fed it to your lovers rare, red on trembling fingers.” She protects Ada from harm and tastes the things in life that Ada cannot.

Saint Vincent, a second identity, has “slow and simmering hungers,” he is cool rather than hot. He hides Ada’s curves under loose clothing and binds her breasts. Saint Vincent comes to the forefront of Ada’s mind when she and Ashugura have their heart broken by their first real love. He too protects her and opened doors that Ada cannot open on her own.

While several reviews have framed Emezi’s novel as a work exploring mental illness, Emezi has stated explicitly that, “none of this is a metaphor for mental illness.” In Freshwater she gives form to the lived experience of occupying multiple identities and realities simultaneously. “I am a village full of faces and a compound full of bones, translucent thousands,” she says. For Emezi this multiplicity is not a disorder, but rather a necessary means of expressing a fuller self in its complex relation to the world. It is a state of opening oneself to the far reaches of the mind, to the invitations extended by the spirit world.

In an interview Emezi has stated that she identifies as obganje. She notes that it was difficult for her at first to be open to a spiritual construct of self because of years of Western education that dismissed the spirit world as fantasy. She goes on to explain that many cultural and spiritual narratives have been delegitimised and even erased by colonisation and Westernisation. Through Freshwater, Emezi kindles the West African narrative of her heritage within herself and shares it with the wider world.

Freshwater overflows. It gives flesh to experiences and sensations that often remain unformed in the margins. Emezi is proudly subjective in her writing, she blurs the lines, nothing is discrete. While the book speaks with strength on its own it seems to bleed out of its edges and if the reader ventures into Emezi’s interviews and other works they will find that Freshwater continues, it grows beyond the page.