Warning: superheroes are on the loose in Melbourne! Something is in the air, it seems, and it’s not a bird, a plane, or Superman.

First, it was the vengeful, eponymous superhero in Blackie Blackie Brown: The Traditional Owner of Death (written by Nakkiah Lui) at the Malthouse Theatre. A week later, right next door to the Malthouse, I visited A Lightness of Spirit Is The Measure Of Happiness – an exhibition of 10 newly commissioned works by Indigenous artists at the Australian Centre for Contemporary Art (ACCA).

It was here, in Kaylene Whiskey’s work, Seven Sistas, 2018, that I came across more superheroes. Seven Sistas is Whiskey’s variation on a creation story derived from many different Aboriginal nations. The Seven Sisters are chased by a bad man (in this case, who else but a moonwalking Michael Jackson!), and escape into the sky, ending up as the Seven Sisters, or Pleiades, constellation. Whiskey’s series of paintings depict seven strong and charismatic women, all with superhero qualities, but unlike The Superfriends on a Saturday morning, these ladies are chilled. “Me and Wonder Woman dog going for a walk,” says Wonder Woman casually, via a painted conversation bubble. Cool, WW, I almost reply, but then I remember where I am. 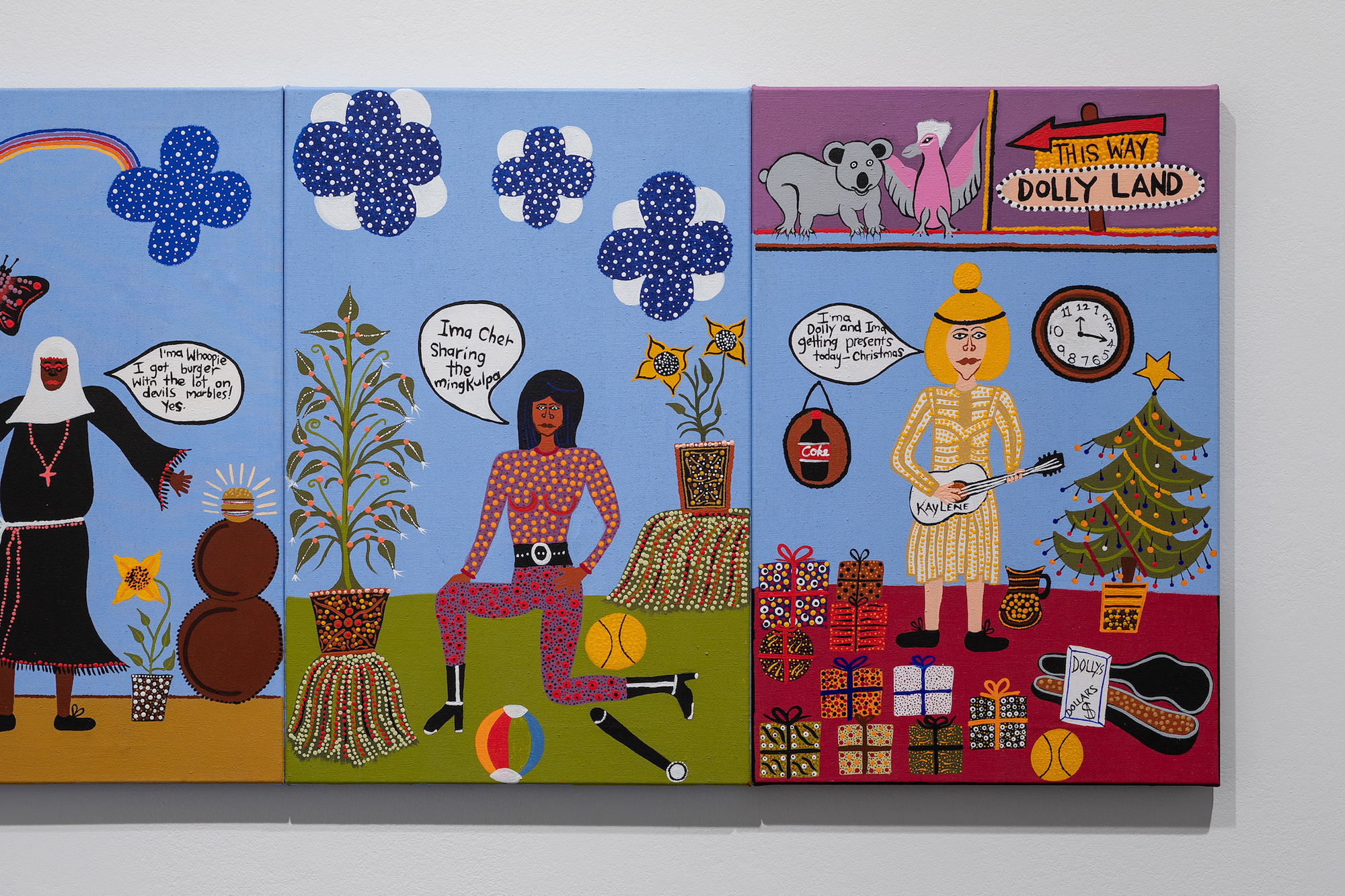 Most of these women are familiar heroes from popular culture, but the most striking Sista does not use a name: “I’m a Anangu Kungka, with my rocket,” she announces: she is a woman from the Anangu Pitjantjatjara Yankunytjatjara (APY) Lands, in northwest South Australia, where Whiskey is from. Next to her is a small rocket with the word “Home” scribed whimsically across it, and she holds an Aboriginal flag in one hand and a spear in the other. I have no doubt that this Anangu Kungka is a fearless explorer of land and sky. An infectious sense of fun is conveyed in these works, which are bursting with the artist’s obvious love of colour. Bushes, cacti, suns, flowers, dogs, hamburgers, boomerangs, and other objects fill the landscape around each woman; so imbued are these things with colour, energy and movement, they’re almost jumping off the canvas. Kaylene Whiskey is a Yankunytjatjara artist from Indulkana community on the APY lands.

There is more irreverent humour in the short film, Never Stop Riding, 2017, by senior artists and leaders from the APY Lands community of Indulkana, Peter Mungkuri, Alec Baker, and Mr Kunmanara Pompey.  As young men, these three artists, now elders, were renowned stockmen who worked with horses, mustering cattle. The film, created with a group of younger men, is a spoof of a Spaghetti Western, with a touch of Pulp Fiction thrown into the mix. In a playful homage to Sergio Leone, wide, aerial shots of the Australian outback contrast with cuts to extreme close-ups: a cowboy eyeballing his enemy before a shoot out takes place. Gunshots are accompanied by popping noises and cartoonish special effects. Cowboys sneer straight to camera “Go ahead, make my day!” You can’t help but appreciate the delight and laughter that went into making this film.

Lightness of spirit is an intangible thing, but I felt its effect as I walked through this exhibition. It began in the foyer, where I could hear the chanting of young voices. It’s a recording of children from Parkes Public School, New South Wales, chanting the Wiradjuri name of the native Australian parrot, known in English as budgerigar. The soundscape is part of Jonathan Jones’ work, untitled, (gidyirriga), 2018, and accompanies a wall of ceramic budgie figurines. Jones is a member of the Wiradjuri and Kamilaroi nations of South-east Australia, based in Sydney, NSW. 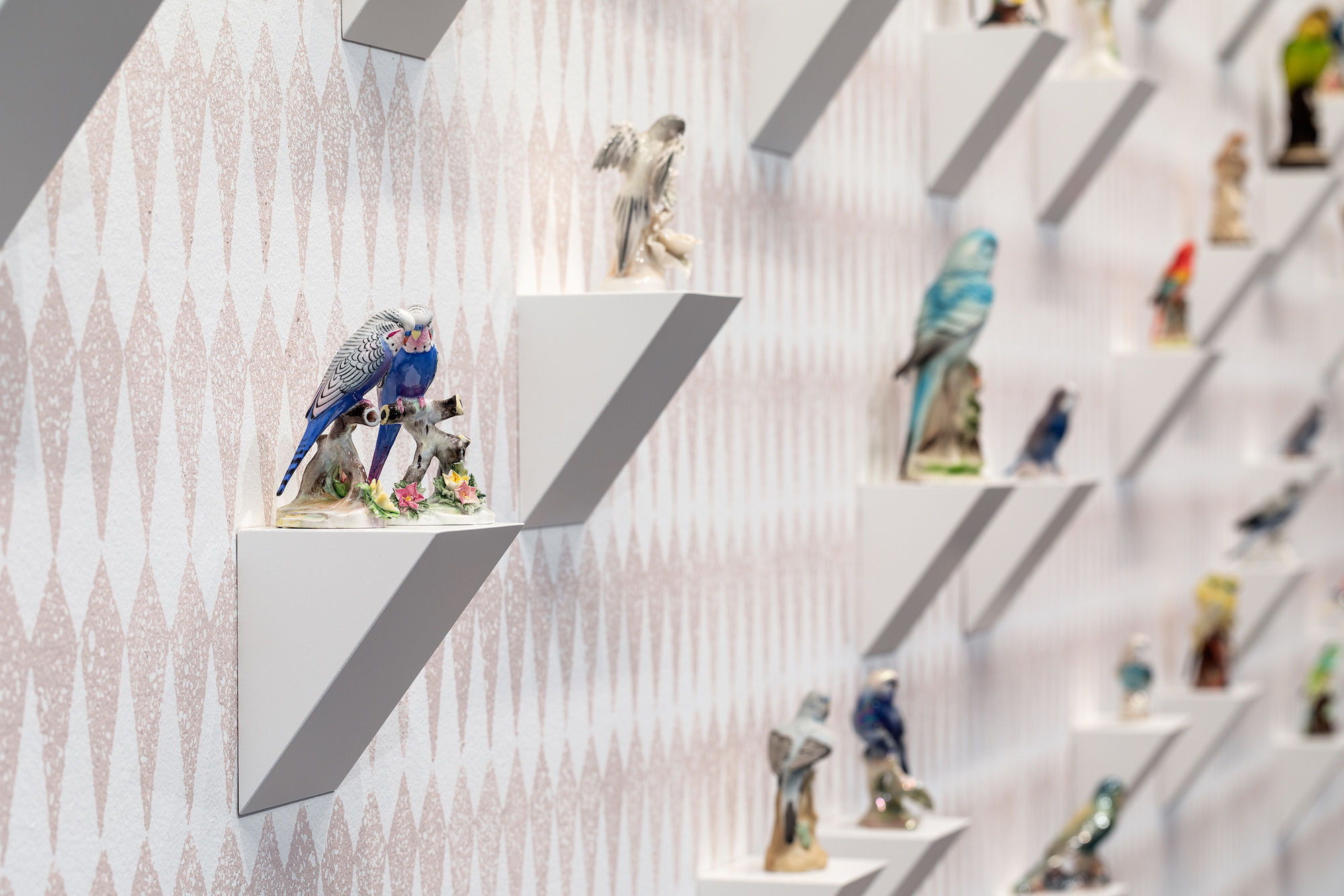 It takes a particular lightness of spirit to combine elements that have deep spiritual and cultural meaning, with personal narrative and a touch of gentle humour. Jones’ idea stems initially from a personal connection – a grandmother who collected ceramic figurines – and culminates in a piece that is gentle and light-hearted, yet rich with meaning. The work reflects, amongst other things, on the history of Australian native flora and fauna (the native parrot, I learn, has existed for five million years), the appropriation and gradual distortion of cultural imagery (seen in the morphing designs of ceramic budgies) and language (heard in the chanted Wiradjuri word that sounds very similar to budgerigar), and the need for Indigenous communities to maintain control over their own languages.

Happiness is currently a popular topic in the self-help industry, and a notoriously hard thing to measure, but, thankfully, there is no navel-gazing or delving into pop-psychology here. This show explores the idea of happiness as a deeply communal experience. Hannah Presley, ACCA curator, says the idea for the exhibition was to bring artists together and talk about the things that “sustain us as Aboriginal people.” To identify and celebrate the sources of “happiness and joy”:

“The idea was (…) to have some good laughs, get a bit of strength, think about community and family – the things that make us strong.” [i]

It’s hard to single out only a few of these pieces when all the work so successfully embraces Presley’s ideas – family, community, strength, a few good laughs. There is pride in family, in the powerful black and white family portraits that Yhonnie Scarce printed on large banners and hung high above our heads. There is a humorous look at community, in the small sculptural figures that Lisa Waup placed where I could peer into those grotesque, grinning faces, and wonder why they looked so familiar. There is a love of family stories in Benita Clements’ watercolour paintings of her family’s real and imagined lives. (Painting near Glen Helen and seeing a UFO! being, I assume, one of the latter!) There is humour in Vincent Namatjira’s painting of Trump and Putin visiting his remote desert community. And there are many more strong, energetic and playful works in the show. 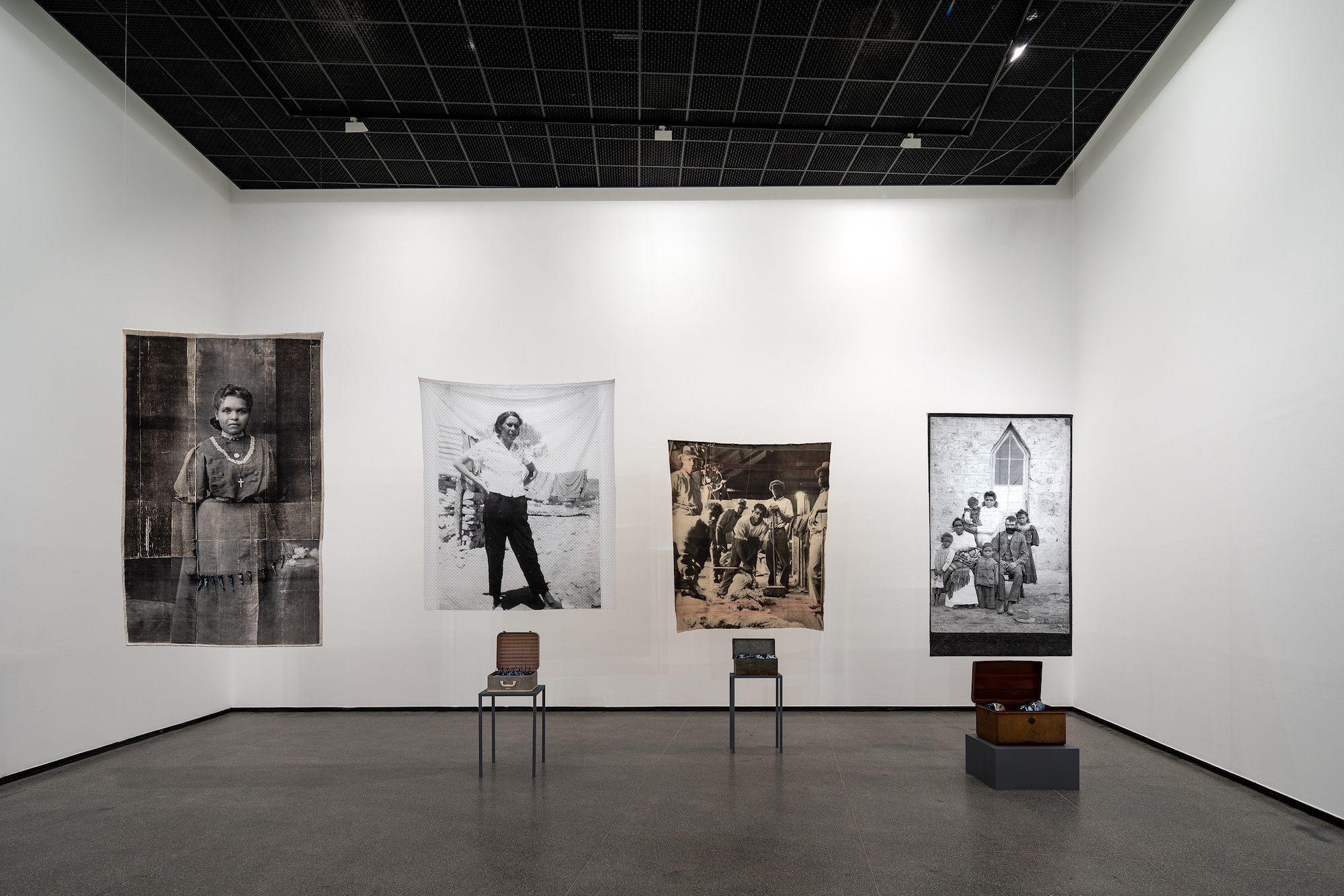 If a lightness of spirit is indeed the measure of happiness, then these artists have a good handle on what constitutes happiness for them, and for their communities. Happiness, they tell us, lies in taking pleasure in the small, everyday activities families and communities enjoy together, whether that’s a cup of tea or a UFO sighting. These works are warm, engaging and frequently humorous, cumulatively presenting a joyful celebration of contemporary Indigenous life, culture, and humanity.

[i] Hannah Presley, artists talks, A Lightness of Spirit Is The Measure of Happiness, podcast available on ACCA website.

To all Aboriginal and Torres Strait Islander readers, we warn you that this article may contain names of and references to deceased persons.

A Lightness of Spirit is the Measure of Happiness will be showing at Australian Centre for Contemporary Art (ACCA) until 16 September 2018.

The show is curated by Hannah Presley and is the first exhibition for Yalingwa, a partnership between Creative Victoria, ACCA and TarraWarra Museum of Art. Talingwa aims to support the development of contemporary indigenous art, artists and curatorial practice. Yalingwa will include three curatorial appointments and three major exhibitions focussing on new works commissioned from indigenous artists.