Look Closer, a photographic exhibition by Daniel King, recently ended at the Level 17 Art Space at Victoria University. The exhibition set out to address the deeply held stereotypes our society fosters with regard to persons of Aboriginal and Torres Strait Islander descent.

King … takes a playful approach to his serious subject matter.

Using carefully staged scenes, King incorporates humour and takes a playful approach to his serious subject matter. Bold statements are superimposed over each image (“isn’t full-blood”, “violent”, “loves petrol”, “lazy”). A dictionary-style definition is provided for the key terms, along with a conversational or situational “context” (“‘She never does any work and she is always on Facebook!’ Kristy [says] to her boss, Angela, who replies ‘But she is our social media marketing manager Kristy!’ Kristy’s face turns red.”)

A few of the photographs in the small and carefully selected exhibition are wonderfully framed. The image addressing assumptions of sporting prowess is particularly dynamic; its subject being assailed with tennis balls, footballs, basketballs and shuttlecocks fired from the direction of the viewer.

Primitive 2011 also has a striking composition: a man in a leather jacket stands firm in the centre of shot, his face tense with concentration as he throws a boomerang from each hand. Behind him, the power poles and city skyline of Melbourne provide an immediate visual disconnect. 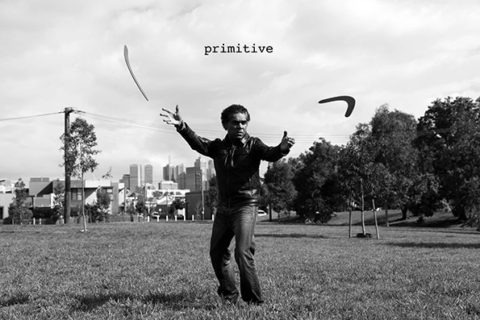 Not all the images make the mark, however. Although King has chosen humour to make his point, much of the imagery is simply obvious and fairly uninspired (for example, the Aboriginal woman accepting a handout of cake cut from a large cake shaped like Australia). Instead of a thought-provoking exploration of issues and assumptions, the subject matter is dismissed through one-dimensional comedic responses; which, although entertaining, are relatively unexciting. One gets the feeling that King has only begun to scratch the surface of the very large and ambitious aim of his project – revealing and overcoming prejudice.

Look Closer takes a light-hearted, but respectful approach to serious issues of representation and understanding.

Look Closer takes a light-hearted, but respectful approach to serious issues of representation and understanding. Although his execution sometimes doesn’t live up to his subject matter, Daniel King has opened up a conversation on a difficult facet of our society. He will no doubt continue to explore these political themes (which are also rendered personal, given that King himself is of Aboriginal descent) in his future work.

Look Closer was exhibited as part of the Melbourne Festival from 4 to 15 October.