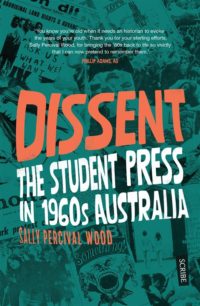 Compared with the current state of university student press, that of the 1960s seems completely foreign, a hotbed of dissent amplified by the tension between social restlessness and political conservatism.

This is especially clear in historian Sally Percival Wood’s new book, Dissent: The student press in 1960s Australia. In a vast exploration of the people, politics and power of the student press, Wood encapsulates the importance of the student press in Australia. Within the likes of the University of Sydney’s Honi Soit and the University of Melbourne’s Farrago, among others, university students found their voices and ensured that they were heard as a dissenting cry against the social and political injustices of the era.

Near the beginning of the book, Wood describes the “confluence of events” that catalysed the emergence of a radical student press, including the introduction of television, the fact that university education was more accessible than ever before and had lost some of its elite status, and, perhaps surprisingly, the arrival of the Beatles in 1964. This, according to Wood, coincided with a notable shift in Australia: “Australia was letting its hair down, losing its virginity, and redefining itself in its own image. These transformations were writ large across the student press where in one decade Australian university students attempted to off-load the baggage of an entire country.”

The thing that Wood does especially well in Dissent is to tie seemingly unrelated events together, through the lens of the student press, to trace the social, cultural and political transformations of Australia. Her writing style is lively, sharp and passionate, painting a clear picture of the events that transpired, even for those of us who weren’t alive at the time. In Wood’s thorough surveillance of various student publications, she has been able to produce a coherent story of social change.

Ranging from the early 1960s to 1972, when the Whitlam government came to power, Dissent’s coverage is expansive, detailing the student press involvement in topics such as the women’s rights movement, the inclusion of Aboriginal and Torres Strait Islander students into universities, censorship, and the fight against the Vietnam War. The Vietnam War in particular demonstrates the growing dissent of the student press, acting as the catalyst for a deluge of editorials, cartoons, articles and posters, and highlights the deep frustration of students who were well-educated and dissatisfied with the state of things.

“Increasingly, student newspapers also revealed a growing impatience with the status quo by their active engagement with political issues unfolding outside the university,” Wood writes. “In the 1960s, student newspapers provided independence and balance.”

The writing in Dissent is especially profound; with her sharpened pen, Wood goes on to critique the current state of the student press within Australia, fervently questioning whether it’s lost its nerve. Although they faced an uneasy future, the students in Dissent strikingly rose up against injustice and believed that their words might make a difference. Their forthright attitudes are hard to compare with what we now recognise as student media, particularly given that the editors of the time regularly attracted the attention of ASIO and the Australian government.

“Dissenting views were not tolerated by the government and at times the exchange of opinions of university campuses became very ugly,” Wood writes.

From the perspective of a university student, Dissent is especially fascinating as it provides deep insight into the controversies of the period, as well as how youth responded to these. For today’s student press, Dissent acts as an exemplar of the power that students may wield if they’re willing. It is an evocative and detailed piece of writing, which is as interesting as it is rich with stories of the 1960s. It’s well worth a read.

DISSENT: The student press in 1960s Australia is available from Scribe.