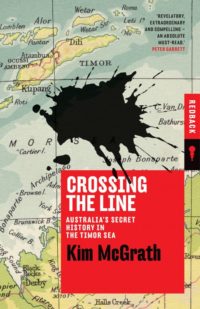 Earlier this month, Australia and East Timor signed a treaty that drew the first ever maritime border between the two nations. It stands as the culmination of decades of bitter embroilment over the oil-rich Timor Sea.

Canberra has been quick to frame the treaty – which was the first to be negotiated under the UN Convention on the Law of the Sea – as a triumph of the international legal system and an example of Australia’s dedication to maintaining fair diplomatic relationships with its neighbours. Julie Bishop celebrated the moment as a “landmark event for our two nations, but also for international law…Both governments have deemed this to be a just and equitable outcome”.

However, this view obscures the shameful actions that a succession of Australian governments took to reap an estimated five billion dollars’ worth of oil from reserves very close to East Timor’s southern coast at an unimaginable human cost to the Timorese people.

Kim McGrath’s Crossing the Line: Australia’s Secret History in the Timor Sea recounts the stalemate, legal challenges, diplomatic gymnastics and outright bullying that Australia inflicted on its neighbour in the decades leading up to this treaty signing.

With access to recently declassified government documents, McGrath provides a succinct, clear and revealing overview of more than 50 years of Australia’s complex diplomatic history with East Timor, first as Portuguese colony, then under Indonesian occupation, followed by a United Nations administration and finally, since 2002, as an independent nation.

Her research uncovers that, by the late 1960s, Australia was issuing oil exploration licences in the Timor Sea north of the median line. In doing so, government officials were forced to suppress the overwhelming physical evidence of numerous geologists, which proved that Australia’s drilling rights should be restricted to south of the median line according to international law. As McGrath puts it, this began the “pattern of duplicitous diplomacy that continues today”.

Some of the most disquieting and outright shameful facts revealed by McGrath concern Australia’s complicity in Indonesia’s brutal invasion and 24-year occupation of East Timor from 1975 until 1999. McGrath relates this complicity – which involved sending material aid to the Indonesian military – almost entirely to Australia’s favourable maritime border agreement with Indonesia. An independent East Timor, it was argued, would be far more likely to insist upon the median line, which would place the largest potential sites of oil wealth under East Timorese jurisdiction.

The dominant thinking of top Australian politicians and diplomats at the time, who were able to ignore or downplay reports of widespread famine and mass casualties at the hands of Indonesian military, is elucidated through briefing documents, official memos and telegrams, as well as several revealing annotations to these original documents. The callousness of Australia’s actions is made brutally clear in the way that McGrath tells the story of the Indonesian occupation in parallel with the history of maritime disputes. She recounts how, in 1978, a priest published an appalling first-hand description of the atrocities in East Timor, warning “genocide will come soon”, yet only a week later, instead of denouncing the violent and illegal occupation, Australia declared that it had decided to accept East Timor as part of Indonesia.

Especially in light of the recent treaty signing, Crossing the Line is an important resource for understanding the geopolitical and economic motivations behind Australia’s turbulent relationship with, and often shameful treatment of, the people of East Timor. While activists and Timorese negotiators have much to celebrate this month, McGrath reminds us that Australia’s recent willingness to enter treaty negotiations has come many years too late.

Crossing the Line: Australia’s Secret History in the Timor Sea is available from Black Inc.