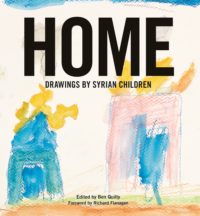 All of us cling to hopeful stories – speaking at a Melbourne Writers Festival event, Syrian architect and author Marwa Al-Sabouni uses this phrase to define “home” as it is constructed by our cities and communities. Beside her on the panel is artist Ben Quilty who, in association with Penguin Random House and World Vision, has produced a collection of drawings by Syrian children entitled Home which aims to ignite sympathy in response to the humanitarian crisis in Syria.

The impetus for the book, which is made up of over three hundred pages of drawings, emerged while Quilty was accompanying author Richard Flanagan through Lebanon, Greece and Serbia, following the route traced by Syrians forced to flee their country. While in a transit station in Serbia, Quilty found himself entertaining a group of children and, with no translator available, he encouraged them to introduce themselves by drawing, using the supplies he carried with him. One particular child was drawing vigorously and so, Quilty recounts, he found a translator to ask her if she could draw her home; six-year-old Heba drew a small square house with a helicopter above it raining shells on to the roof, and on either side of the house were two stick-figure bodies surrounded by red.

This drawing accompanies Quilty’s introduction to Home – in it he recalls “Heba made me realise how imperative it is for the world to see her drawing, for the world to see drawings by every child who has survived the Syrian disaster.” During the event Quilty makes a strenuous point of not being credited as the author of Home –rather, he calls it “the children’s book”. As he goes on to explain, all the proceeds of the book go directly to support World Vision’s Child Friendly Spaces, as well as early childhood and basic education projects in Syria, Lebanon, Jordan and Iraq. The drawings for the book were collected with the assistance of World Vision and its partner programs – the specific organisation which facilitated each child’s contribution is listed alongside every drawing, along with the location, the medium and size of the original, and where possible, the child’s hometown, where they were living at the time of the drawing, name and age, which ranges from as young as four and up to 14. 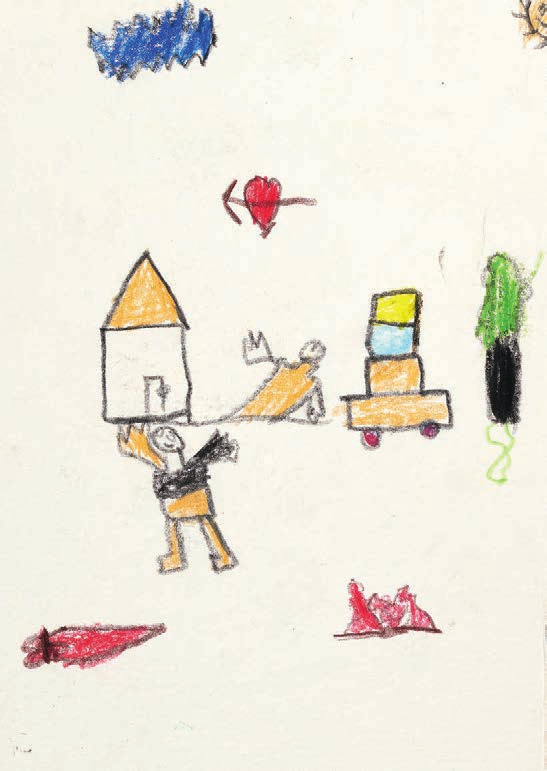 Bachar Mohamad, age eight: “I drew my home in Syria. A car on the road drove over me and broke my neck. I drew a thief. He was trying to break into our house. He burnt the house down.”

In some instances, a quote from the child about their drawing is included, and these make for an incredible impact. For example, Bachar Mohamad, age eight, says of his drawing “I drew my home in Syria. A car on the road drove over me and broke my neck. I drew a thief. He was trying to break into our house. He burnt the house down.”

During the panel Quilty draws the audience’s attention to another example in the book, special to him because it was the boy’s first time drawing – Ali Hussein, age ten, drew a large black bus with coloured windows which he describes as “The black bus that brought me from Syria.” When asked why he drew it, Quilty recalls that Ali simply replied that he wanted the bus to take him back.

It is these kinds of questions which inform the structure of the book. When children were invited to contribute to the project, they were asked to draw their response to questions about their home, what was happening at their home now, or what they remembered or hoped for in relation to their home – Quilty is quick to emphasise that the children were never asked to draw things which made them sad, or which upset them in any way.

Zaid says of his drawing, “This reflects Syria, now Syria is nothing. Everything is destroyed and there’s just colour without anything. One day when I go back to Syria I will live in the blue because the blue means happiness.”

Regardless, the content is often violent and intensely harrowing. The six sections are titled “Threat”, “Light”, “Dark”, “Dream”, “Tears” and “Home” and it is telling that the sections “Threat” and “Dark” are the longest, somewhere between fifty and sixty pages each. The content within each section doesn’t necessarily feel cohesive, but this doesn’t detract from the experience – in fact, the difficulty categorising something as “simple” as a child’s drawing speaks volumes about the complexity and scale of the situation which they are depicting. 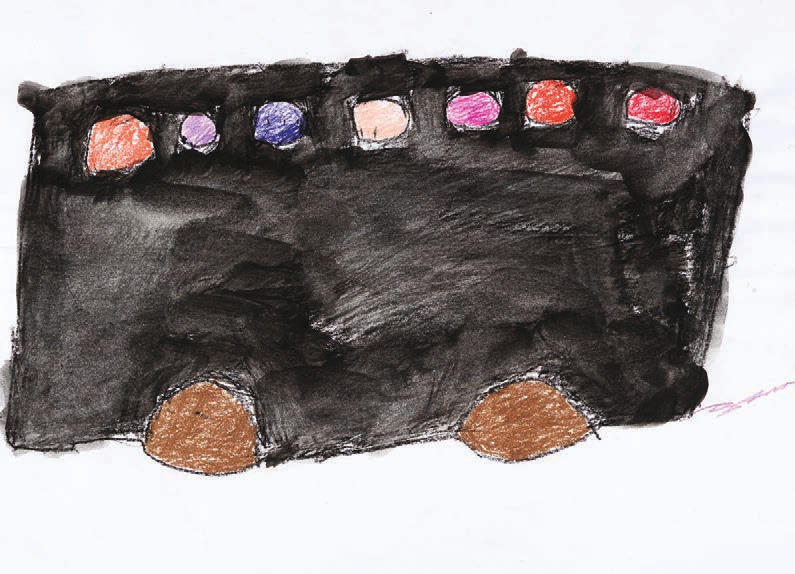 Given its size Home could be mistaken for a coffee-table book, but in fact it rewards close reading. In spite of the repeated images of helicopters, bombs, and tanks, the drawings are unexpectedly beautiful – the vibrancy of some of the more abstract pieces seems worlds apart from the circumstances under which they were created. In appreciating this, the collection gains a much deeper significance – the drawings don’t merely stand as a universally recognisable cry for help, for understanding, or for sympathy, they also represent the moment in which a child in the midst of crisis is allowed to step back and express themselves creatively.

The significance of this freedom of expression, and their determination to craft positive and hopeful narratives is evident in many of the drawings – one of the most striking is by Zaid, age ten, whose drawing is spread across two pages in striking lines of colour. Zaid says of his drawing “This reflects Syria, now Syria is nothing. Everything is destroyed and there’s just colour without anything. One day when I go back to Syria I will live in the blue because the blue means happiness.”

Published by Penguin Random House, in conjunction with World Vision