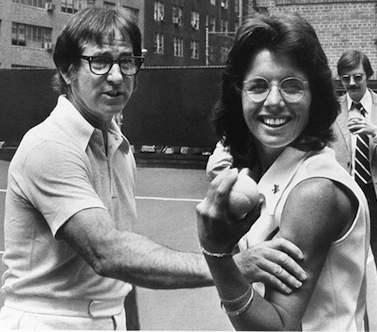 As a champion tennis player during the early years of the women’s liberation movement, Billie Jean King knew the potential of sport to make an impact that reverberated through broader society.

With equal prize money in the four grand slam tournaments, tennis is sadly unique in the sporting world, though it didn’t happen without a fight.

Battle of the Sexes, directed by James Erskine, insightfully documents the most significant years of this fight, led unwaveringly by King. Bubbling along throughout is the build up to the film’s main event and namesake – a tennis match between King and retired men’s Wimbledon champion turned professional provocateur and self-confessed chauvinist, 55-year-old Bobby Riggs.

The match was played in 1973, as the women’s liberation movement gained serious momentum in America. Tennis had become a focal point, with its separate, but parallel, men’s and women’s competitions. With the dawning of the professional era, gaps emerged with men were being offered as much as twelve times more prize money in tournaments, leading King and others to action.

“I decided I was going to spend the rest of my life dedicated to fighting for equal rights … I knew that tennis would be a platform if I could become number one.”

Though essentially separate from the politics of the professional tour at the time, the exhibition match with Riggs, who had been challenging King for months and earlier defeated Margaret Court, came to symbolise – for better or worse – the struggle for fair pay and respect in women’s tennis. Erskine’s documentary gives genuine atmosphere and meaning to a contest that was played amid Las Vegas-style tacky glamour. He places it in its true historical context, which many of the millions watching at the time probably did not fully appreciate.

The build up to the match is captivating, helped by the presentation of distinct heroes and villains. Of course, Riggs needed no help to be placed neatly on the wrong side of enlightenment:

“I feel that women have had things going too good for them for a long time. American women are the most privileged group of all time in history and are still not satisfied – they want more.”

Billie Jean King, meanwhile, was the revolutionary of the women’s tour at a time when tennis was becoming tightly intertwined with the women’s liberation movement. Like Riggs, she clearly defined her own role:

“I decided [as a young child] I was going to spend the rest of my life dedicated to fighting for equal rights and opportunities for boys and girls, men and women. I knew that tennis would be a platform if I could become number one.”

Comprised of archive footage and modern day interviews, Battle of the Sexes is a historical document of people and events, more than explicit exploration of the issues that lay beneath.

The film arguably has scope that it doesn’t fulfil. It does not directly tackle lingering arguments against equal pay in tennis – which primarily revolve around the number of sets played in Grand Slam tournaments and audience size, but also veer into more sexist and old-fashioned notions of women’s sport. And it only briefly, as somewhat of an afterthought, touches on the legacy of the women who dramatically reshaped the opportunities available to those who followed them in professional tennis.

However, it is a compelling story with larger than life personalities. Looking back four decades on, with equality still scattered at best in both sport and society, the achievements of Billie Jean King and her peers are as relevant as ever.

A glitzy exhibition match – with accompanying publicity circus – that may or may not have proven or meant anything in itself seems almost a crass centre-point, but it is an irresistible one. Having built a compelling narrative of struggle and rebellion around the women’s tour of the day, and the dismissal of it by the likes of Riggs, by the time the film reaches its main event, one can’t help but to cheer King on as though equality did rest on the result of this match.

Of course it did not, and it is impossible to say what impact the match had. But it is certainly interesting to note, amid debate on measuring who is worth what, that the most-watched tennis match in history is still one that saw a woman at the height of her abilities beat a has-been chauvinist in three straight sets.

Battle of the Sexes is showing at ACMI until 13 February

View the trailer below: