Was the resettlement of refugees in Cambodia always doomed to fail?

After the first four refugees from Nauru were resettled there, Monique Sebire travelled to Phnom Penh to talk to locals and human rights workers to find out what this deal between the Australian and Cambodian governments will mean for asylum seekers.

While Minister for Immigration and Border Protection, Peter Dutton, describes Cambodia as having “a stable economy and varied employment opportunities”, independent human rights consultant, Billy Tai, calls the stability “deceptive”, stating, “the economic development only benefits a certain group of Cambodians … and those benefits are not filtering down at all.” 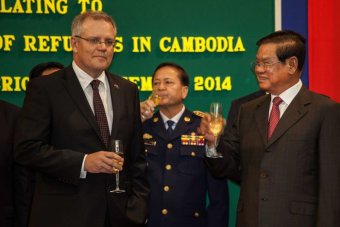 “The gap between the rich and the poor is bigger than it was when I first came, and that’s very distressing really”, says director of Jesuit Refugee Services in Cambodia, Sister Denise Coghlan. Working with refugees in Cambodia since 1990, Denise’s main concern for those resettling in Cambodia is that they won’t be given proper documentation allowing them to work. Again, contrary to Minister Dutton’s message that those resettled will have “strong support”, Denise explains that education services are limited. “The kids don’t really have access to an education that’s of quality … It’s not a proper curriculum that gets people through.”

The International Organization for Migration are assisting the government with the resettlement, and their spokesperson Joe Lowry expressed that they want refugees to “stand on their own two feet from day one.” Given the roadblocks they’re set to face, this is an ambitious and perhaps unrealistic goal.

Sr. Denise’s past experience with refugees in Cambodia has shown that it’s seldom a smooth transition, and predicts that things will be much the same for this new group.

“Of all the refugees that have been through our hands in the past 25 years, very very very few have stayed in Cambodia. Most of them have been either resettled, or run away, and some have voluntarily returned home. It’s not what they dreamt of, and I think it is quite difficult for some of them.”